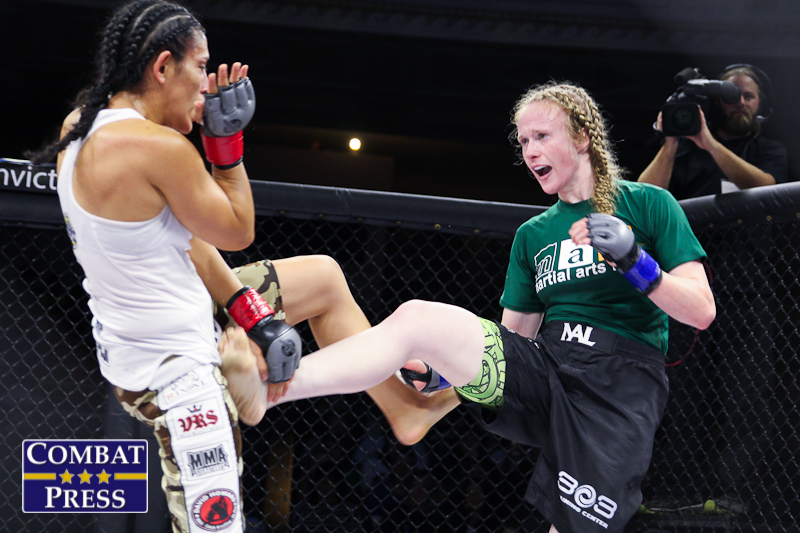 As far as clichés go in the fight business, “iron sharpens iron” ranks pretty high on the list. But in the case of UFC strawweight JJ Aldrich, it might actually be a bit of an understatement.

Even though she only became a professional fighter in 2014 and has just seven pro fights under her belt, Aldrich has already trained and spent time with some of the best female fighters in the world, including Claudia Gadelha, Tecia Torres, former UFC strawweight champion Joanna Jędrzejczyk and current UFC strawweight titleholder Rose Namajunas.

When the Colorado native turned pro, she immediately began competing for Invicta Fighting Championships. Aldrich compiled a 2-1 record before being selected to compete as a strawweight on the 23rd season of The Ultimate Fighter last year, with Gadelha and Jędrzejczyk serving as the head coaches. Aldrich was Jędrzejczyk’s first pick, but she lost her quarterfinal bout to the season’s eventual winner, Tatiana Suarez.

“I lost my first fight within the first 10 days of being there, and it was heartbreaking, but it made me grow as a fighter and a person,” Aldrich, whose record now stands at 5-2, told Combat Press. “I enjoyed being able to focus 100 percent on fighting. I used to work and train at the same time, but on The Ultimate Fighter I could train full-time and it really helped me understand what it means to be a pro. Having high-level fights like that is a big difference.”

Fate still managed to intervene for Aldrich after her stint on The Ultimate Fighter, however. She returned to Invicta last year and picked up a victory, inside the cage and out. She was contacted by UFC matchmaker Sean Shelby. Suarez was supposed to compete on a Fight Night card in Albany, N.Y., but had to withdraw. So Aldrich stepped in to face Juliana Lima.

“I made weight in seven days, and it was a lot to take in,” Aldrich said of her first UFC fight. “I didn’t really grasp the full situation until after the fight. Every fight is a different experience, but it’s for the best and it’s been pretty crazy so far. I’ve been treated like a real pro.”

Aldrich lost the fight on the scorecards, but her willingness to step up and help out the UFC on short notice meant it was not her last UFC outing. She returned in June to face Chan Mi Jeon at UFC Fight Night 110. Aldrich took the decision nod in the fight. She’s come a long way since her time in Invicta, but she’s still grateful to the organization and its president, Shannon Knapp.

“Shannon was great and treats fighters with a lot of class,” Aldrich said. “I really enjoyed that experience and being around people who I knew were in the same situation as I was. It was a high-caliber organization for me to debut in, and I felt I was on that level. I grew little by little in Invicta, and competing in front of the cameras helped prepare me to be in the UFC.”

Aldrich’s preparation for life as a UFC fighter continues through her training with both Namajunas and Torres, who are rumored to face each other early next year for the strawweight title. Aldrich trained with Namajunas before her title victory over Jędrzejczyk at UFC 217 in November, and Aldrich trained with Torres before her fight with Michelle Waterson at UFC 218.

“Rose has been a longtime training partner, and I’ve seen Rose grow,” Aldrich said. “And to be close to someone and see her become champion was eye-opening.”

Aldrich previously trained with UFC bantamweight Raquel Pennington, who moved to Colorado with Torres earlier this year. But Aldrich declined to pick a winner of the rumored rubber match between her training partners, Namajunas and Torres.

“I know nothing,” Aldrich said with a laugh.

Aldrich has her own fight coming up in just a matter of weeks. She takes part in UFC Fight Night 124, the first Fight Night card of the new year. The event takes place on Sunday, Jan. 14, 2018, and Aldrich goes up against Danielle Taylor, who holds a 9-2 record.

“Danielle is a super-tough fighter, and it’s a really tough match-up for me,” Aldrich said. “But I also think it’s a good fight and great match-up for myself.”

The issue of cutting weight is an ongoing one in MMA. Aldrich handled the cut well, even during her time on The Ultimate Fighter and when making her UFC debut on one week’s notice. She believes proper education could go a long way toward helping fighters safely cut weight.

“Cutting weight is never fun,” Aldrich said. “We drain ourselves completely, then have to turn around and compete 24 hours later. I’ve never had a problem with it, because I work with some really good people. It was a little harder for my first fight in the UFC, because I had just cut weight two weeks before.

“I think more information is needed for fighters, and to work with a nutritionist to learn what to put in our bodies and what goes out. Reaching out to people and learning about ourselves and our bodies can help ourselves get to the goal.”

The presence of women in MMA continues to grow as the calendar turns to 2018. The UFC has added yet another new weight class for women. Of course, there’s also the ongoing effort from fighters like Aldrich, Gadelha, Namajunas, Jędrzejczyk and Torres.

“Women have played a huge role in MMA,” Aldrich said. “The next pay-per-view is headlined by women, and the fight card I’m on has four women’s fights on it. I’ve talked to people who don’t know much about MMA, but they want to see a girl fight. We’re more entertaining and we put everything we have into it. The UFC is still learning what we bring to the table and that people want to see us fight. MMA is still growing, and it’s growing even faster because of women.”