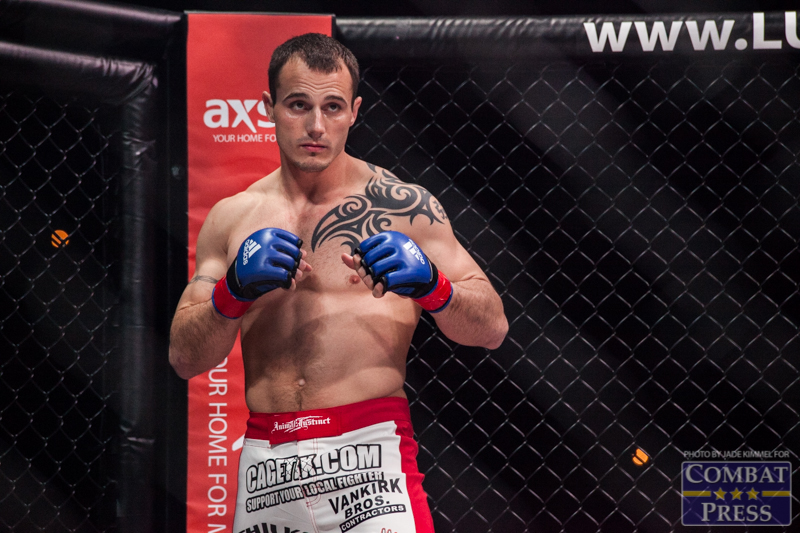 Some people just have to stay busy. No matter what chaos is happening around them, they need a busy life. It can actually be quite soothing for this type of personality.

Nebraska’s Dakota Cochrane is one of those people. The guy just can’t sit still.

Cochrane is a husband, a father of three, and a personal trainer at Lifetime Fitness. He also happens to train as a full-time professional mixed martial artist. He fights, on average, over five times per year. The unofficial industry average is closer to three. Life is hectic, but he enjoys it.

“It’s going good — busy,” Cochrane told Combat Press. “Everybody’s in school, my daughter’s in volleyball, my son’s going to start wrestling soon, and he’s already in Cub Scouts. My life has been busy shuffling everybody around.”

Cochrane recently moved to Iowa, but he works in West Omaha in Nebraska. Even with a long commute, he still has time to shuffle kids around and focus on his own training at Premier Combat Center, alongside teammates Joe Ellenberger, Darrick Minner, Alonzo Martinez and many others.

Cochrane has already fought four times this year, and there are still two and a half months left. His last two fights were wins over Maki Pitolo and Dave Castillo, which were a nice change for Cochrane after losses due to disqualification and decision. Even with four fights in, he was chomping at the bit to stay busy, so he welcomed his next opportunity with open arms.

On Friday night, Cochrane will face Brazil’s Ciro Rodrigues to headline Legacy Fighting Alliance 25 at the Ralston Arena in suburban Omaha. He wasn’t really expecting to go from a three-month layoff to a premier spot on a major card.

“I knew they were coming to Omaha, but I had no idea I’d be headlining or anything like that,” Cochrane admitted. “I didn’t even know if I was going to be on the card, so it came pretty suddenly. It was perfect timing for when I wanted to fight.”

Rodrigues trains out of Kimura Nova União. Like Cochrane, he is a very well-rounded fighter. He doesn’t stay quite as busy as Cochrane in the cage, but he has a lot of good experience. Rodrigues is coming off a first-round knockout of David Michaud at LFA 19 in August.

As busy as he is, Cochrane still has time to study his opponents, and, in addition to his normal training regimen, working at Lifetime Fitness affords him the time to also focus on his own workouts. He has different routines he uses, and it usually depends on the opponent.

“I mix it up between strength programs, regular lifting and cardio,” Cochrane said. “For this one, I tried to just focus on strength and getting stronger. I felt like in that last fight I was a little weaker than [Pitolo] in the first round. I don’t like that.”

Cochrane is ready to go for this weekend. If there is one thing people understand about the LFA, it’s that a win in a marquee bout can quickly lead to a title shot. The only problem for Cochrane is that the current state of the welterweight division is not exactly ideal.

“One person did mention the title shot,” Cochrane said. “But my old teammate, James Nakashima, is the titleholder, and I wouldn’t fight him. I mean, it wouldn’t be the end of the world, but if it was about getting into the UFC or a lot of money, then I’d obviously consider it.”

As busy as Cochrane is, he doesn’t need the idea of fighting a former teammate noodling around in his head, so for now he will focus on beating Rodrigues in a headlining fight that airs live on AXS TV.

“I’m going to try to go out there and get the W and put on a show,” Cochrane said. “I always try to do something crazy, do something that people haven’t seen yet.”

Cochrane definitely has a full plate, but he makes it work. For him, three months is a long layoff anyway, so he will definitely be ready to unleash some pent-up aggression come Saturday night. Who knows? Maybe he’ll be back in the cage one more time before the end of the year.

“I just like to stay busy and have a date and target for my next fight.”