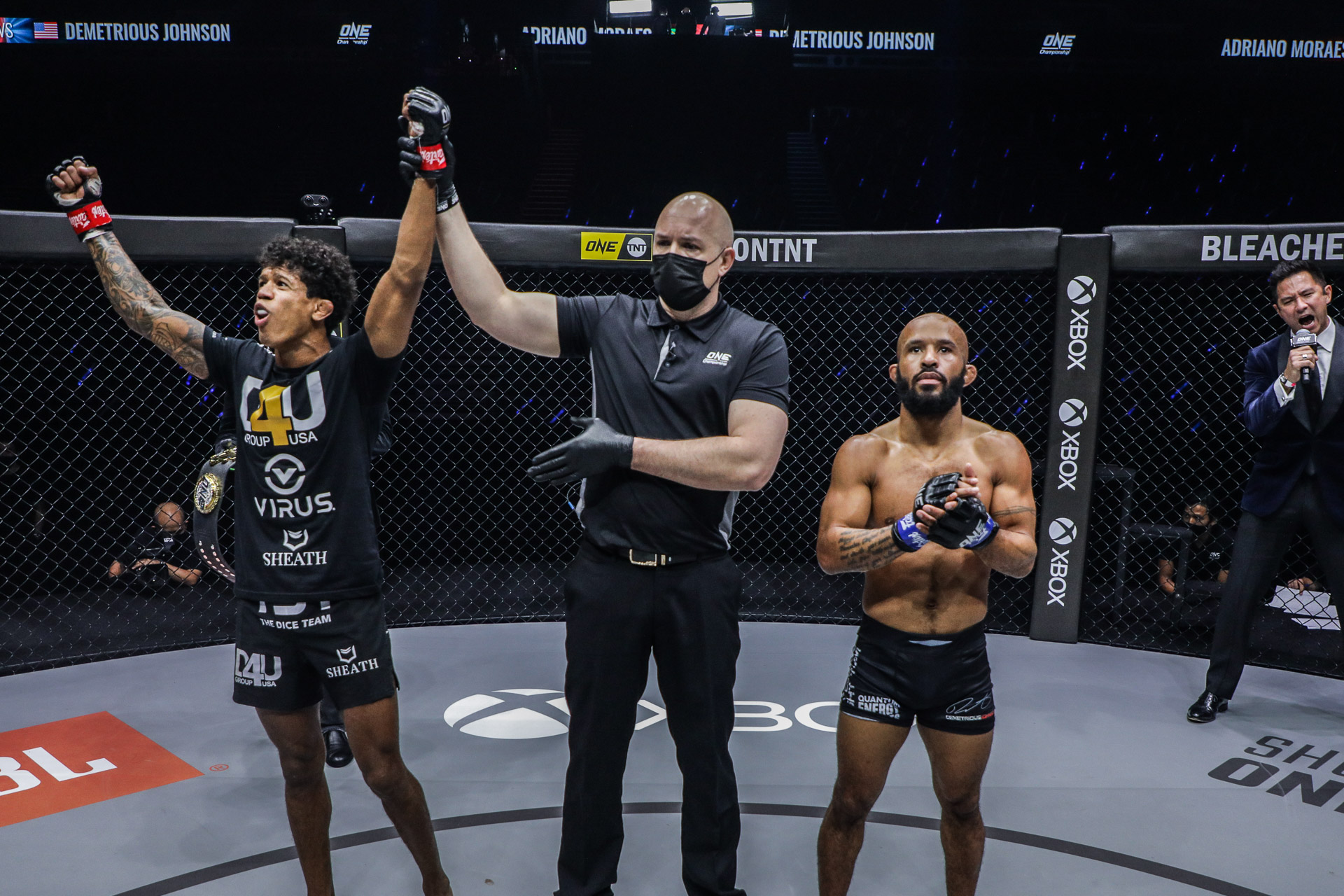 Adriano Moraes has sat atop the ONE Championship flyweight division for years. Now, the Brazilian superstar is ready to reaffirm his win over the mixed martial arts GOAT and etch his place in history at ONE 161: Moraes vs. Johnson II on Aug. 26.

“Mikinho” is set to square off against Demetrious “Mighty Mouse” Johnson for the second time when ONE enters U.S. primetime next month.

For the longtime world champion, Johnson’s reputation fails to precede him. He sees the American icon as simply the latest challenger he has to dispatch.

“As champion, I have to defend my title,” Moraes said. “Regardless of who my opponent is, I have to be ready on the scheduled date to do my job in the best possible way. I’ve fought Demetrious Johnson, I’ve shown my strength against him, but if this is the fight ONE Championship wants, if that’s the plan, I’m in.”

Moraes’ finish against Johnson last April shocked the combat sports world. Never before had Mighty Mouse been knocked out, so to see him having him unconscious on the canvas was an incredible sight for most.

But for the American Top Team star, it came as no surprise.

He had already shown himself to be one of the best flyweights on Earth with years of tireless work and a tight grip on the ONE flyweight world title. Defeating Johnson was just proof for those who doubted him.

“A lot of people were surprised,” Moraes said. “But my team and the people who always believed in me weren’t surprised. We already knew. We work very hard. We have a unique discipline. So, for us, it was a normal working day, and thank God everything went well.

“I think that in this rematch, I have nothing to prove. I just want to give my best, as always, and show that I am an increasingly complete athlete.”

While Moraes may have nothing left to prove, he is still supremely focused on carving out his legacy in the sport.

And this matchup with Mighty Mouse is important for the Brazilian to do that. Another victory over Johnson could give him legitimate grounds to call himself the greatest flyweight to ever grace the sport.

And that is what he’ll be fighting for come Aug. 26.

“This fight is very important for my legacy because I want to make as many title defenses as I can during my career,” Moraes said. “And [another] victory over him will help a lot in building that legacy.”

Although the flyweight king is deep in planning another memorable performance to cement his place in history, he isn’t turning away from the spotlight.

The American Top Team representative wants to become the new standard for the sport in his adopted home, and fans should expect him to do everything he can to shine inside the Circle at ONE 161.

“I am always waiting for new opportunities, and I always ask God to show me the way. If that’s His will, I’ll take it, for sure.”