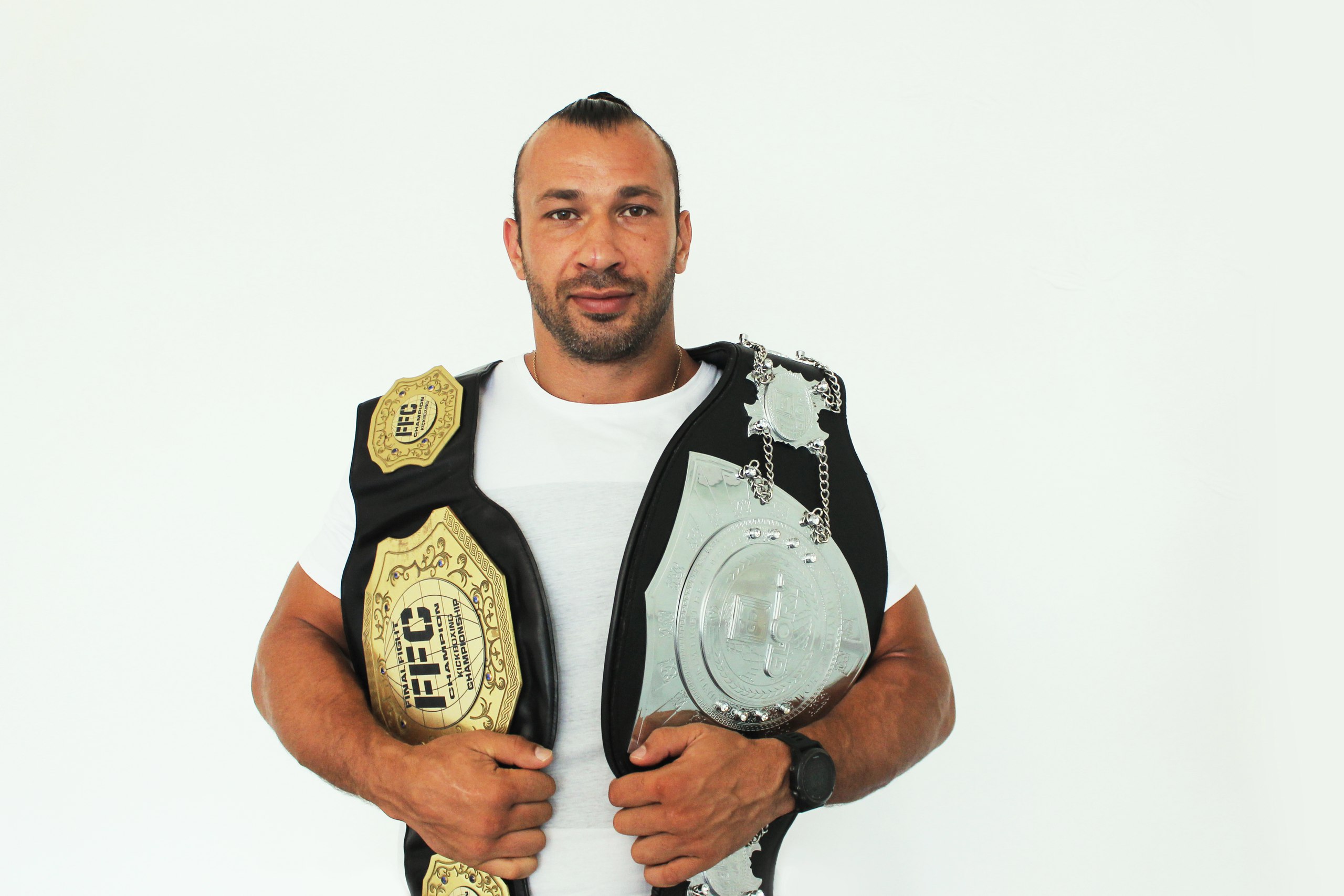 The UFC’s Nick and Nate Diaz declare themselves to be practically the only fighters in the UFC who don’t “dope.” At the same time, they are outspoken supporters and users of marijuana. The brothers claim that marijuana is not a form of doping. Do you agree?

I don’t know what they consume. I don’t know Nate Diaz personally and I don’t know what he consumes. I am not interested. It is his private business. What are you willing to do to take cherished belt? We know that even about pharmacology — people think that you take an injection and become stronger immediately, but it doesn’t affect you like this. You must work four times harder and only then you will get some result. It helps you to recover better somehow. About the one who promotes marijuana… Well, we live in Odessa City, Ukraine. Tell me if marijuana is forbidden here.

Does it prevent someone from using it?

You just answered your own question. There is only one problem left. It’s trafficked via black-market dealers. Where does all the money go? Let’s have a look at Holland, for example. They allow marijuana. They have some specific places there, and you can buy it only in special places. Are there many junkies? Has the country drawn into drug addiction? Do they have a crisis?

As far as I know, many Dutch have never tried marijuana. It is a tourism industry.

I think people should have a right to choose. Another question — is our society ready for it? Sincerely? No. However, we will not be ready for a long time. We need someone to prepare us.

[At this point in the interview, Margarita, Zhuravlev’s wife, asks us if we’re ready for tea.]

Here is my wife, doctor of philosophy and psychology. She works as a forensic psychologist right now. She found herself and enjoys her profession. This flat is our family office. Do you see the children’s sandbox? It is intended for sand therapy. My wife works as a child psychologist half of the day, and the rest of time she deals with maniacs — she helps to investigate crimes. So, if you need a qualified answer, she can respond. My opinion: people should have a freedom to choose, always.

Do you plan to go abroad for a training camp before fighting Artem Vakhitov?

From the very beginning, when I signed with GLORY, everybody understood that our fight is inevitable. Vakhitov is a champion, and I am the champion — interim, but nobody cares about the interim. Time will tell if I become the reigning champion.

About Artem… We know each other. He is a good guy. I respect him as a person and consider him a talented athlete. But [the fight] is going to be hard for him.

No. I have some thoughts, but I don’t want to make a guess. It will be announced in advance.

How often do you decide to act by yourself in a fight instead of listening to your corner’s advice?

I want to say from the very beginning that it is unprofessional, but I listen to my intuition in a fight often. Lately, I am trying to listen my coach, of course. But, generally, it is about fight tactics. For example, before the fight against [Saulo] Cavalari, I understood that I do not need to box with him. I waited for his actions to work from them. So, sometimes, there were tiny hesitations. I was waiting for him, and he pushed. I became wiser. I didn’t do what I did in the fight with [Ariel] Machado. Sometimes I waited — come on, give me a low kick and I will counter punch you.

Some internet comments say that you gained weight and became slower. What do you think of that?

I think the opposite — that I became quicker and wiser. I became stronger. I don’t know why people say that. They are not professionals. I don’t pay attention now. The same happens when someone says, “Pavel, perfect fight!” He doesn’t care about how I looked in the fight. I won, and that is perfect. It is pleasant to hear, but such comments have zero value. It’s another thing to listen to expert comments from someone who understands this sport. In this case, the words are valuable.

About physical condition… Yes, I pay much attention to my physical preparation, and everybody can see it. I cease physical preparation before the fights now. I only do TRX for bounds. Because, to be honest, excess physical preparation with heavy weights decreases speed. You can bulk up a month prior to a tournament. Two weeks prior, you need to “scatter” yourself, as we say. We start to work on speed qualities.

Gokhan Saki is in the UFC. Give us your opinion on that.

Gokhan Saki is one of the most talented fighters from the old K-1. I understand he is not in Holland. He gets himself prepared in UAE. I consider Saki the best in striking techniques among all UFC fighters. In wrestling, we will see.

Who’s your favorite in the rematch between Badr Hari and Rico Verhoeven?

Badr and Rico are complete opposites.

Badr did a lot for kickboxing popularization. He is a big name in kickboxing, and I believe he deserves to be. He is charismatic. Striking. He has good timing and sense of distance. His name will stay in kickboxing history for long time. His personality is another question. I am not attracted by people who hit other people at parties. I know he’s scandalous. He doesn’t hide it.

Rico is completely another. Rico is similar to our Klitschko — unbearably positive. I remember Rico when he just appeared in professional kickboxing. Ideal kid. Those times, he was big and kind. A bit funny. A little puffy. He didn’t box very well. Even two years ago, I would beat Rico without problems. But considering his latest fights, I understand that’s now gonna be a hard task for me, because he improved his shape. He is a great, hard worker. It is hard for people with such dimensions, because if he stops working, then he will become fat. He has large legs. He can develop a belly. People with such constitution are inclined to it. So, he earns only respect. If Rico beats Badr, I wouldn’t be disappointed. If Badr beats Rico, it will be a good shake-up for all of kickboxing.

Badr has one big disadvantage: he has short fights. Rico is opposite. If it is a five-round fight and it lasts all five rounds, I don’t think Badr will have any chance. Will he knock out Rico? Rico is training with boxers — with Tyson Fury, for example. I see that he changed a lot. He started to move a lot and became sharp. Once, our fighter from Odessa fought him. Serhiy Lashchenko beat him. However, Rico was completely different back then.

Last year, GLORY signed Badr Hari for only one fight. Tell us your contract terms.

I have a contract for one year. You can sign for a single fight, as well. I don’t know who was the initiator in Badr’s case. Maybe Badr didn’t want to sign for a year, or the promotion was afraid to sign him for long term. He is unpredictable. He can end up in a situation similar to [Aleksander] Emelianenko Jr. I mean, he can prepare and then, once, punch a pensioner while being drunk. He can do anything.

As I understand it, GLORY is trying to move away from the criminal world. Many fighters in Holland have so-called criminal roots. You know that several years ago Amsterdam’s city officials even tried to prohibit all the fights in Amsterdam? They decided to take away the tables near the ring, because, allegedly, criminals were sitting there. They fixed it somehow. GLORY is trying to move away from such an image. So, Rico is perfect for them, whereas Badr has many questions to answer.

Are you the No. 1 pound-for-pound fighter?

Provocative question. I can name fighters I like. Surely, Badr. I would add Saki, [Nieky] Holzken, Rico. [Artem] Levin, even if I am not a fan of his style. [Robin van] Roosmalen, Saenchai, Artur Kyshenko. Vakhitov and Zhuravlev, of course.

In October, Remy Bonjasky will fight Melvin Manhoef. What do you think about this kind of veteran fight?

The more fights, the better. Through movement and technique, Bonjasky will leave no chances for Manhoef.

Who is the biggest loss for GLORY?

I can be prejudicial, because, first, I am interested in my weight class. Saki, of course. I think if Saki and [Tyrone] Spong fight at 95 kilograms, then GLORY would become the leaders.