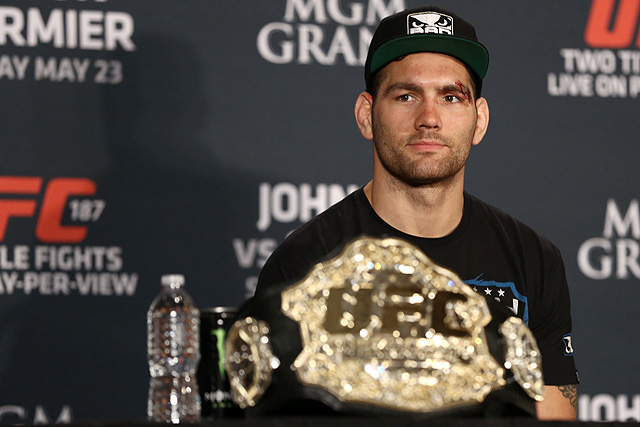 Things have not gone Chris Weidman’s way in his first two fights inside his home state of New York. At UFC 205, Weidman seemed to be winning his fight against Yoel Romero until a flying knee in the third round knocked him out. The former champion was about to begin a downfall.

Weidman was looking for redemption not only in his division but in the state of New York when he took on Gegard Mousasi at UFC 210 in Buffalo. Weidman, the former middleweight champion, engaged in a pretty back-and-forth affair. However, in the second round, Mousasi landed knees to the head of Weidman and chaos ensued as to whether or not they were illegal shots. After going to the referee and commission, the fight was ended and Weidman had taken a third straight loss and his second in his home state.

While the UFC was trying to get MMA legalized in New York, the company’s president, Dana White, made it clear that Weidman was one of the loudest voices among UFC fighters advocating for the legalization of the sport.

Fast-forward to July 2017. Weidman will once again fight in his home state. He takes on Kelvin Gastelum at UFC on Fox 25 in Long Island. Since MMA became legalized in New York, it’s been no secret from Weidman that he wanted to fight in Long Island. Even after two very unfortunate fights, the former champion will be back in New York, this time in his backyard, and all signs seem to point to the third time being the charm for the former champ.

In Gastelum, Weidman will have an opponent who has been through recent adversity himself and is still being introduced to the middleweight division. While Gastelum did finish Tim Kennedy in his middleweight debut, it’s a far greater challenge to go up against a former champion.

A technical breakdown of this fight is surely needed, but not here. This is about Weidman getting back to his true form in a division that is now seemingly wide open for the taking. Yes, Michael Bisping is the champion and Robert Whittaker is the interim titleholder, but after those two men, the top contenders — the aforementioned Romero, plus Ronaldo “Jacare” Souza and Luke Rockhold — are all coming off losses.

Bisping is still pursuing a fight with former welterweight champion Georges St-Pierre. After UFC 213, Whittaker is said to be nursing a knee injury. All of the chaos means that a win for Weidman can catapult him back into fights within the top of his division, including a possible rematch with Rockhold, the man who took Weidman’s belt.

An opportunity to get right back into the mix of things at the top of the middleweight division is great, but redemption will be the name of the fight going into UFC on Fox 25.

After controversy and disappointment, the former Hofstra wrestler will be inside the arena where he always envisioned himself fighting, although it would’ve been sweeter with the belt. It’s an opportunity at redemption and an opportunity to get right back in the mix of things on the stage that has mattered so much to him. Weidman has all the makings to make his third fight in New York a charm.