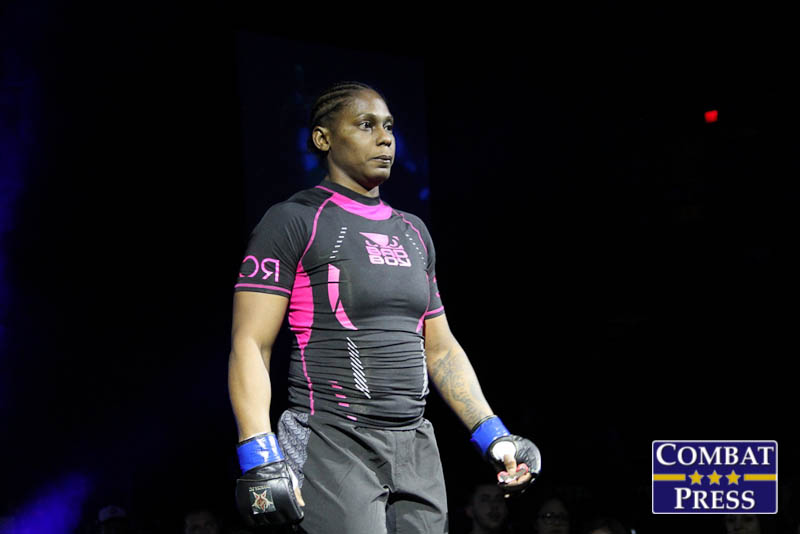 Give Them a Chance: Eight Fighters Who Could Resurrect the UFC Women’s Featherweight Division

De Randamie outworked Holm for five rounds to take the unanimous decision and the 145-pound crown. Yet, the division seems to have died a swift death. Its champ, de Randamie, announced her plans to move back to 135 pounds while rejecting a potential clash with Cyborg, whom de Randamie characterized as a cheater who relies on performance-enhancing drugs. Cyborg, meanwhile, has been too busy feuding with a strawweight fighter. And Holm has a June 17 date with Bethe Correia in the bantamweight division.

Obviously, the absence of these three ladies makes for a dismal outlook when it comes to the future of the UFC’s women’s featherweight division. However, if the promotion could coax even just one of these athletes back, it still has to build a roster of 145ers to compete for the belt.

While the women’s featherweight division doesn’t enjoy the depth of the bantamweight or strawweight classes, it’s not a complete wasteland. If the UFC really wanted to bring life to the division, it wouldn’t have to look far.

Of course, there would be the no-brainer additions, such as veteran competitor Charmaine Tweet. Ediane Gomes, who recently returned to action, has been chasing after a Cyborg fight for years. Current Invicta Fighting Championships featherweight champ Megan Anderson has also entered the fray by calling for a fight with Cyborg. Even recent Bellator signings Amber Leibrock and Amanda Bell could find themselves in the Octagon in the future.

Then there are those names that might not resonate as loudly with fans. These are Invicta regulars, MMA veterans and some fresh faces to the pro MMA circuit. These are the women who could combine to resurrect the women’s 145-pound weight class.

Walker, 37, is one of the oldest fighters on this list, but the “Black Mamba” has posted a solid 5-1 mark since turning pro in 2011. She hasn’t been the most active competitor out there, but this has more to do with her status as a featherweight fighter. The Texan has notched notable victories over Gabrielle Holloway, Brittney Elkin and UFC veteran Peggy Morgan. Her only loss came to perennial top featherweight Charmaine Tweet.

The 27-year-old Kolesnyk is the next challenger to Megan Anderson’s Invicta crown. The Ukrainian gets her crack at the belt in July. Through five wins and one no-contest, the Global Fight Gym product has tallied three knockouts and two submissions. Many of her fights took place in China, and Anderson is the first established foe she’ll face. Kolesnyk has a lot to prove, but if she stops Anderson, she immediately becomes a top star in a division that’s ruled by Cyborg.

The 32-year-old Ibragimova already had her chance at Cyborg. The pair met in early 2016 at Invicta FC 15. Cyborg finished the Ukrainian with just two ticks left in the first round. Ibragimova has also fallen to Cindy Dandois, but that’s her only other loss in a career that spans roughly eight years. She has finished her opponent in eight of her nine victories.

The “Feenom” competed primarily at lightweight during her amateur career, and she debuted at 155 pounds in a victory over Rach Wiley at Invicta FC 14. Spencer’s last outing marked her first fight at featherweight. She outworked Madison McElhaney for three rounds at Invicta FC 22 to remain perfect in her pro career.

Sorenson couldn’t top Ediane Gomes in their recent Invicta FC 23 bout, but she did enough to make it a close split verdict. The Cellar Gym standout spent much of her early career with the King of the Cage organization. She debuted in 2015 and eventually captured the league’s bantamweight strap. Along the way, she defeated veteran competitor Brenda Gonzales. Sorenson made her Invicta debut in the 135-pound weight class and scored a split decision over Jessy “Jess” Rose-Clark. As an amateur, Sorenson lost to Amber Leibrock via a 25-second knockout.

Czech made her pro debut in late 2013, but it wasn’t until 2016 that the Polish upstart made her name known. She did score a decision victory in her debut outing and fought to a majority draw in her sophomore appearance. Her third fight was a first-round technical knockout of Kristina Matilevich. Her most recent appearance, though, served as the most impressive. The Bastion Tychy export needed just 59 seconds to stop Laura Čiulkevičiūtė with strikes. Only her latest fight took place at 145 pounds.

The 24-year-old Letson is another new addition to the 145-pound division. The Pura Vida product jumped between weight classes as an amateur and landed in the bantamweight division upon making her pro debut in 2014. Letson lost to Christina Jobe via split decision before turning around and reeling off four straight wins. She’s scored three striking stoppages, including first-round finishes in her two most recent fights. Letson has notable pro victories over Al-Lanna Jones and Elizabeth Phillips. Her Invicta debut, which came against Phillips at Invicta FC 21, served as her introduction to the featherweight division.

The 27-year-old Rubin was born in Russia, but she fights out of Israel. The Pariente Academy export debuted in late 2016 with a first-round striking finish of fellow newcomer Laurita Likker-Cibirite under the Bellator banner. She returned to action in April and scored another knockout victory when she faced Carmel Ben Shoshan. Less than a month later, she added a decision nod over Tatiana Voznyuk.