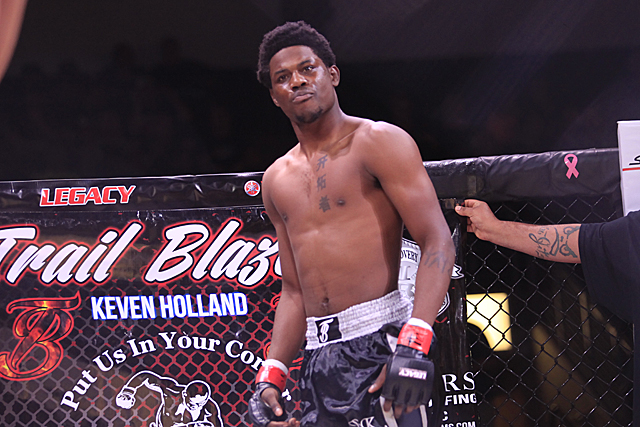 The fight game is sometimes compared to a game of chess. You’re trying to guess what your opponent does before he or she does it. Legacy Fighting Alliance fighter Kevin Holland has a different take, though. It’s not a game of chess to him.

“He’s like a young domino player. He can’t get rid of that devil in him and he has no killer in him,” Holland, who sports an 9-2 pro record, said of Curtis Millender, his opponent at LFA 13 in Los Angeles on June 2. “He shows up wanting a decision.”

Fighters also typically earn their nicknames in pretty random ways. They usually just keep a moniker given to them in childhood, or maybe they create one on their own. But have you ever heard of a fighter taking his nickname from a rejected name for a school?

That’s what this “Trailblazer” did. When Holland’s kung fu teacher was looking to open his own gym, he was deciding between the names “Trailblazer Academy” and “Just Warriors.”

Holland started doing things his own way early on in life. He took martial arts starting at age seven, advancing to yellow belt. He participated in other sports, too, including basketball.

“But I learned I was not a fan of team sports,” Holland said. “I also helped some guys on the football team prepare for games, but I decided to take up skateboarding and even got a few sponsors out of doing that. And I always enjoyed punching people in the face, so I ended up getting kicked out of school for headbutting a security guard.”

Holland was sent to a special school run by a 50-year-old man who knew kung fu.

“He smacked me around,” said Holland.

It was also around this time that Holland began watching the UFC and the now-defunct WEC. Holland watched Urijah Faber and Mike Brown square off in the WEC. He saw the landmark UFC 100 pay-per-view. These experiences were the spark that led Holland down the road to a career in mixed martial arts.

“I went to UFC 101, and when I saw Anderson Silva knock out Forrest Griffin while backing up, I knew I could do that,” Holland said. “I started training in kung fu and grappling, and I started out being trained by [former UFC fighter] Travis Lutter.”

Holland burst out of the gate when he debuted as a pro in 2015. He compiled eight total victories by finish, and five of those finishes occurred in the first round. Holland especially takes pride in his ground game. He believes that he has the psychological advantage when the fight goes to the mat.

“When my opponents take me down, your wrestling starts my jiu-jitsu,” Holland said. “I went 4-0 on short notice with no fight camps, and I just continue to increase my work ethic. I look to guys like Georges St-Pierre. They’re on top, but still look to the basics. I also train with guys like James Vick who are always looking to get better. The mind wants flashy finishes, but fights are won by the basics. If I focus on that, I’ll keep winning. I’m not complete yet. I still have so much to learn.”

Holland previously fought for the former Legacy Fighting Championships in 2015, and he will make his debut for LFA on Friday. The organization came from the merger of Legacy FC and the Resurrection Fighting Alliance. The opportunity to headline a fight card in his own state was too good of an opportunity for Holland to pass up.

“They told me what I wanted to hear,” Holland said. “They’re the number-one organization in Texas and they let me headline in my own state. Who would be better?”

Holland, who has bounced back and forth between the welterweight and middleweight divisions, will fight Millender at 170 pounds. However, he plans to move back up in weight after the fight.

“I prefer to fight at 185 pounds,” Holland said. “Who wants to cut weight? Who wants to kill themselves like that? I like fighting big guys anyway. They’re slower and not as fluid.”

“So I’m kind of leaving that alone,” he said. “I don’t see what beating Derrick does for my career. This fight with Curtis should be for the 185-pound belt anyway. I’m 4-0 at 185 pounds and I won the middleweight belt in the XKO, which is the biggest MMA organization in Dallas.”

Millender, a Bellator veteran, has never fought as a middleweight, though. He’s fought at 170 pounds throughout his career, and he has captured a number of belts within the division. Millender is now on a three-fight winning streak. His most recent victory came inside the Bellator cage.

“[Millender] likes to backpedal,” said Holland. “I heard he idolizes Floyd Mayweather — and there’s nothing wrong with that, but this isn’t boxing.”

Following Holland’s fight with Millender on June 2, Holland is eyeing a move up to an even bigger promotion.

“If the UFC thinks Conor McGregor turned them inside out, they haven’t seen anything yet,” Holland said.