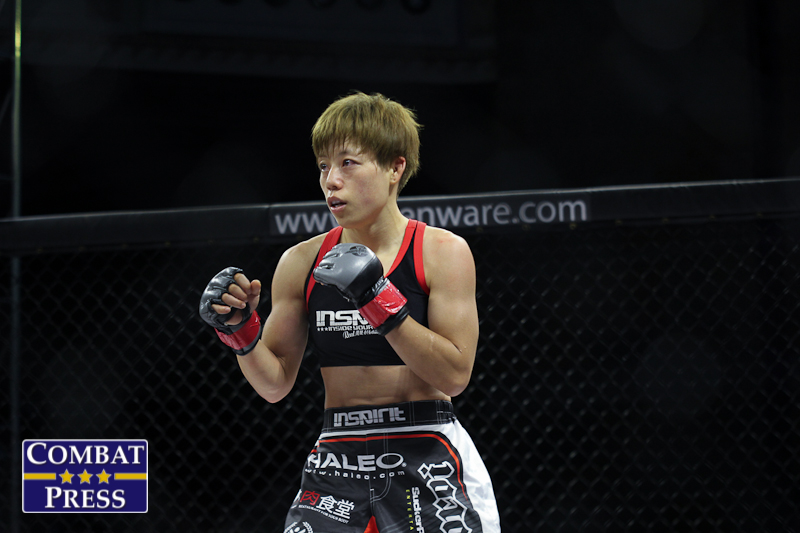 Dropped out of the rankings: Faith Van Duin (8)

Two ranked fighters fought outside of their division in September — one in the UFC at 140 pounds and one at 135 pounds in Invicta. Cristiane “Cyborg” Justino earned yet another win in dominant fashion when she knocked out Lina Lansberg in the main event of UFC Fight Night 95. At Invicta FC 19, Faith Van Duin dropped to bantamweight, but she was promptly decimated by Irene Aldana, thus ejecting her from the rankings. In October, Julia Budd will fight Arlene Blencowe in Bellator in what could be a title eliminator bout.

No ranked fighters competed in September, and none are scheduled right now for the month of October. Hopefully, we see the return of some of these great bantamweights in the near future.

The top-ranked flyweight remained at the top of the mountain. Jennifer Maia defended her Invicta flyweight championship in the main event of Invicta FC 19. Maia bested Roxanne Modafferi via split decision in a thriller. Kalindra Faria took a 135-pound title fight with Titan FC and won her rubber match with Carina Damm. Next month, none of these ranked fighters are scheduled to compete.

It was a slow month for the strawweights, but there was one major shake up. Jessica Andrade continued her campaign since dropping from 135 pounds when she finished Joanne Calderwood. In no time, Andrade could be in line for a title fight if she keeps decimating opponents.

The atomweights were the busiest of the weight classes in September. Ayaka Hamasaki kept her Invicta atomweight title when she retained against Jinh Yu Frey at Invicta FC 19. Due to the cut stoppage, they may square off again in their next bout. Meanwhile, Julia Jones bested Stephanie Skinner on the same card. Janaisa Morandin bested Paula Vieira in Brazil to keep her place in the rankings. Next month, none of the fighters are scheduled to compete.