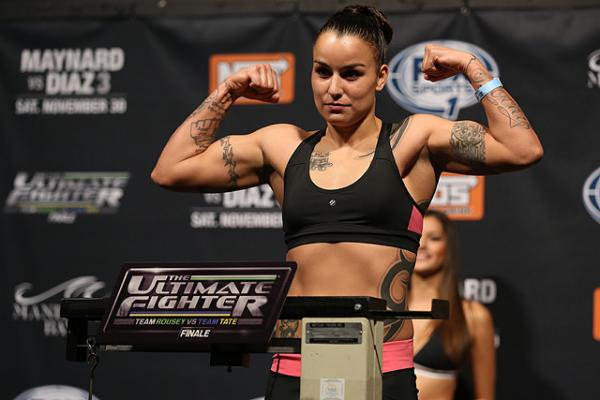 The balance between work and life is important, regardless of what a person does for a living. This can be a tricky balance for mixed martial artists, because, unlike the typical nine-to-fiver, there is not much consistency in the life of a fighter. Camps come and go at different intervals, and relationships can get somewhat tumultuous.

Raquel “Rocky” Pennington has had a pretty amazing fight career, especially for someone who is still coming into her prime. The Colorado Springs native, who is only 27 years old, was 7-1 as an amateur. She has fought a who’s who of opponents, made it to the semifinals of The Ultimate Fighter 18, and is currently riding a two-fight winning streak in the UFC. The streak includes a “Performance of the Night” win over Jessica Andrade and a split decision victory over former bantamweight title challenger Bethe Correia.

With all of the accolades that precede her, it is easy to forget that Pennington is also a daughter, a sister, a friend and a new aunt with a lot of life ahead of her. Even in the midst of a fight camp for her next outing, which takes place on Saturday at UFC 202, she has been taking strides to maintain her work/life balance.

“My little brother just had my first nephew, so I flew out to Georgia and took a long weekend to finally meet him and spend some quality time with everybody,” Pennington told Combat Press. “Other than that, I’ve just been working on making my relationships better with my family and my friends. I’m trying to spread out all the love. We get so close and then, when my fight camp comes around, I’m kind of tied up in my own world. So I’m trying to balance that a little bit more and enjoy myself outside of the training.”

Pennington definitely has felt the effects of fight camps on personal life, so it’s very impressive that, even as young as she still is, she is taking a proactive approach to making life better outside of training during a UFC fight camp. But, make no mistake — fight camp is her top priority, and this one has been fantastic.

“It’s been a solid fight camp,” Rocky said. “I mainly train out of Triple Threat Gym. They try to provide a happy home for a lot of talented athletes, so I bring in a lot of training partners and stuff, and that’s where we work out of.

“Tecia [Torres] is here for the week. J.J. [Aldrich], Rose [Namajunas] — all of them — they come down from Denver to get in some training with me. There are a bunch of people that come in from the Olympic Training Center as well.”

Pennington’s primary coaches, Juan Gonzalez, Jason Kurtz and Iako Kalili, have done a great job of providing her with the right mix of preparation for her next opponent, England’s Elizabeth Phillips, while also improving on some of the aspects of her game that she felt were weak points in her fight with Correia. A split decision is still a win, but, like any fighter, Pennington would prefer a dominant finish.

“I did what I needed to get the win,” Pennington said of her fight with Correia. “It wasn’t my greatest performance, but I sealed the deal, so I’m happy with that. Each fight is a growing experience for me. I’ve definitely gone back, looked at my fight multiple times, and completely grown, so I hope to show a completely different fighter [in] this fight.

“Mixing it up a lot more, pushing the pace a lot better [and] not leaning into certain punches. I was tucking my head a lot in my last fight with Bethe and leaning into her punches, instead of moving my head. You could see in different parts of the fight where I pushed the gas pedal, but then I pulled back. It’s about being a lot more consistent. I know that Phillips does like to stand up, or she likes to go to the ground for some ground-and-pound. A lot of people haven’t seen my ground game, so, if this fight goes to the ground, it will be fun to show. I’m just cleaning up all of my tools.”

After her last fight, Pennington landed at the No. 8 spot in the UFC rankings, tied with Liz Carmouche. For her next fight, she was expecting a crack at another ranked opponent. Instead, she ended up with an unranked Phillips.

“I have to admit it was a little bit frustrating, just because of the fact that I did break into the top 10,” Pennington said. “I feel like I’m trying to work my way up the ranks, but, at the end of the day, I don’t want to take away from any female that is in the UFC. Everybody’s done what they needed to do to get there.

“It felt like maybe I was kind of taking a step backwards. But then, I’m the type of person that tries to stay positive in everything, so I realized that every person brings a different challenge to the table, and that it will be a good fight for me to stay active. And, obviously, it’s another pay day.”

Phillips may not be the ideal match-up, and with the women’s bantamweight title situation turning into a constant state of flux since Holly Holm’s destruction of Ronda Rousey, it would have been easy to pit Pennington against a higher-ranked opponent. She doesn’t care who it is, but she really wants someone higher up in the division.

“Anybody in the top 10,” Pennington said. “Obviously, all of the girls that are up there — Holly Holm, Miesha Tate, Cat Zingano, Amanda Nunes, Sara McMann, Jessica Eye. Just any of them that are hanging out in the top 10. I kind of figured something like that, but it was a pretty quick turnaround for another fight. They originally offered it for the Atlanta card, July 30, but I had some stuff going on, so we agreed to move it to UFC 202, which I’m very happy to be on.”

Training and rankings aside, life has gotten much more balanced outside of the gym as well. In addition to spending more time on the family front, Pennington has also been making a point to spend more time with her friends.

“I’m very spontaneous and adventurous,” said the Colorado native. “I like to go on hikes. We’ve been going cliff jumping. We’ve been going to lakes, kayaking, and just different things. It kind of depends on what mood I wake up in and what I can get my friends to go out and do and what my family is up for.

“We have multiple places here [to cliff jump] in Colorado, but one place that has become really popular is Paradise Cove. It’s out in Guffey, Colorado. It’s freezing. It definitely takes your breath.”

On Saturday night, Pennington will be ready to bring some of that cold blood into the cage when she faces Phillips. UFC 202 has a lot of spotlight fights, including the rematch between Conor McGregor and Nate Diaz. Pennington, meanwhile, will look to light up the night with a dazzling performance of her own.