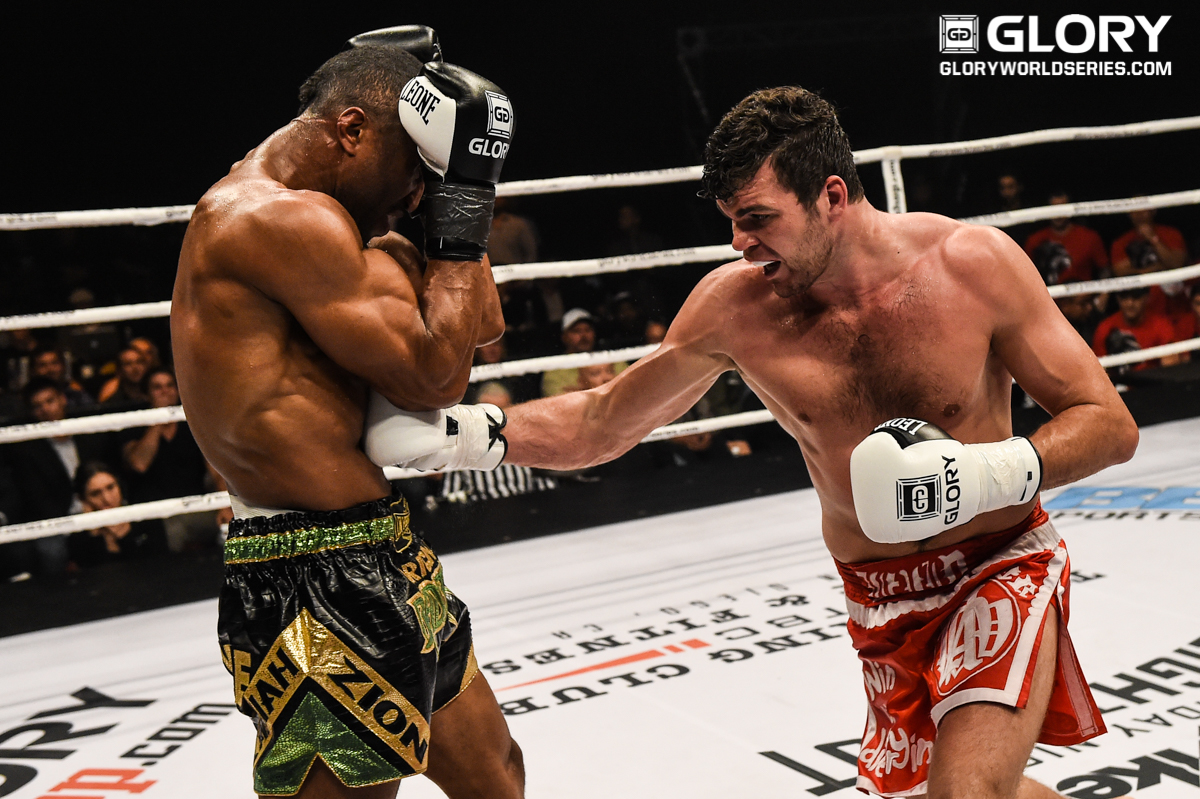 In the main event of the evening, GLORY middleweight world champion Artem Levin put his title on the line against former title challenger Simon Marcus. Both men last fought in the GLORY ring when they collided at GLORY 21: San Diego. The judges were split after a back-and-forth fight, with two of the judges scoring the fight a 47-47 draw. Despite one of the judge’s giving Marcus the win by decision, Levin retained his title due to the majority draw. Levin lost to Marcus just under three years ago under Muay Thai rules at Lion Fight 9, giving even more intrigue to a fight that pitted two of the best strikers above welterweight against one another.

The GLORY 27 SuperFight Series card was the first event to air live on UFC Fight Pass. The headlining bout on the Fight Pass portion of the card was multiple-combat sport athlete Joe Schilling taking on French-American Mike Lemaire.

It was a fight that had a lot of emotion and unfinished business, and what happened in the end was beyond belief. Middleweight champ Artem Levin took on challenger Simon Marcus in what was turning out to be a heated, exciting affair. But, after multiple point deductions to Levin at the hands of the referee, he refused to continue the fight, forcing the referee to disqualify him. With that, Marcus was awarded the title and is the new middleweight champion.

Dustin Jacoby needed to win two fights to claim the middleweight tournament and he did that in impressive fashion. After earning a stoppage of Karl Roberson in the semifinals, Jacoby met Wayne Barrett in the finals, who defeated Robert Thomas in his semifinal match. In their fight, Jacoby asserted himself from the get-go, chasing Barrett down and landing far more strikes. He knocked Barrett down a couple times, and eventually, with one punch, finished his foe to lay claim to the tournament title.

It wasn’t the biggest fight on the card, but it certainly delivered the most action. Over three rounds, Giga Chikadze and Kevin VanNostrand left everything they had in the ring. There were axe kicks, spinning back fists and every other striking technique imaginable. Chikadze was the stronger man down the stretch, though, which could be attributed to VanNostrand being a late replacement. In the end, in what was the fight of the night, Chikadze walked away the winner on all three scorecards.

He had less than two weeks to prepare for Mike Lemaire, but Joe Schilling was able to use superior movement and striking to run a unanimous decision victory. Schilling, who is one of the top fighters in his weight class, made his stake at a potential title shot in beating a legit opponent in Lemaire. It was a solid way to end the preliminary card.

Anderson “The Spider” Silva wasn’t the only Anderson Silva fighting this weekend, as Anderson “Braddock” Silva took on Maurice Greene in the heavyweight division. It was a one-sided affair, as Silva used brutal leg kicks to really slow and damage Greene throughout the fight. In fact, he knocked Greene down a couple times with the aforementioned leg kicks. Greene wouldn’t go away and stayed in the fight, which is why the judges were called and Silva was declared the clear-cut winner by unanimous decision.

UFC veteran Guto Inocente had a disappointing MMA run with the aforementioned company, so he needed to make a good first impression in his GLORY debut. Boy did he, as he needed just one round to put Demoreo Dennis on his highlight reel. There wasn’t much of a feeling out process, as both men immediately searched for powerful strikes. Inocente was the man who put an exclamation point on the night, putting Dennis away with a scary spinning hook kick knockout. Dennis immediately went out on a stretcher and Inocente put himself on the map.

Fans were chanting Richard Abraham’s name, and he did not disappoint his home town supporters, as the Illinois-native dominated the Polish import. Through three rounds, Abraham stalked and landed lethal combinations on Jedrzejczyk. The Pole was defiant and wouldn’t go down, despite taking a huge amount of punishment. In the end, Abraham took the clear-cut decision.

Greene Goes the Distance Over Morales

In front of a very pro-Daniel Morales crowd, Casey Greene overcame a slow start in the first round to take a 29-28 unanimous decision in the opener of the professional portion of the card. Greene used more powerful, precise striking, along with far more aggression, to earn the judges approval. Morales was a bit more tentative as the fight wore on, which is why Greene walked away the victor.