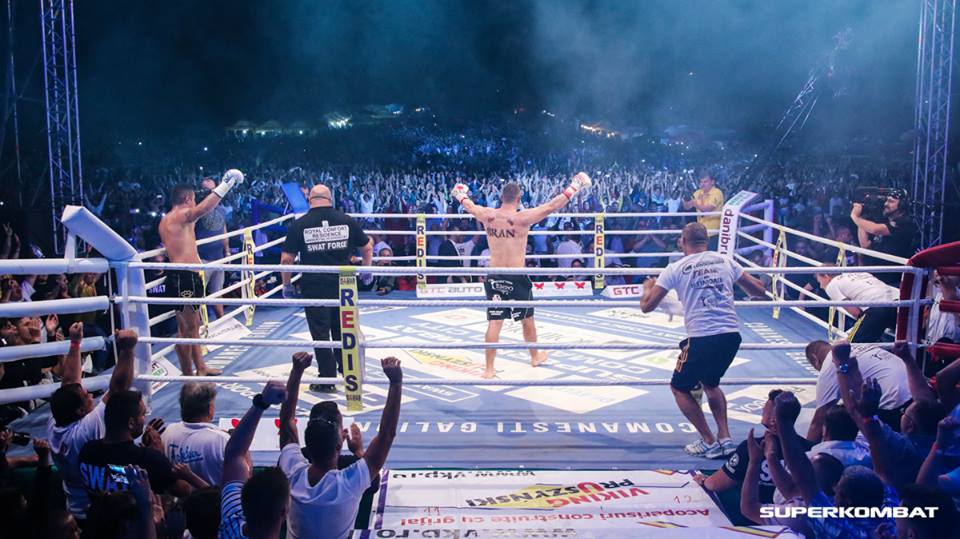 Romanian-based kickboxing promotion, Superkombat Fighting Championship, better known as Superkombat, held a historic event this past weekend in Comănești, Romania. On Saturday, Aug. 6, the promotion brought back one of the country’s most popular fighters, Ionuţ Iftimoaie, for the final fight of his kickboxing career at Superkombat World Grand Prix 2016: Comănești.

The fans packed into the Dealul Galionului, an open-air concert venue, to watch Iftimoaie attempt to leave the sport with the Superkombat cruiserweight title in hand. Iftimoaie returned to the ring after nearly four years away from the ring. The famous Romanian actor, stuntman and fighter wasn’t given an easy win in his retirement fight. He was instead faced with the task of toppling borderline top-10 light heavyweight Francisco Javier Jorge Loren, who was on a winning streak following a recent win at Enfusion Live 40.

The fight was an exciting back-and-forth affair. Loren started off the first round quickly by landing a series of strong kicks and punches, however the boxing ability and shear toughness of Iftimoaie pulled him through his first round of fighting in over three years. Iftimoaie became the aggressor in the second frame with his jab and powerful hooks inside the boxing range. Late in the second round, the fighters exchanged heavy blows in tight with Loren slowing down from the relentless punching to the body from Iftimoaie. The Romanian television star continued his heavy pressure from the beginning of the third round and well into the final frame of his kickboxing career. Loren fought back late in the round, but Iftimoaie poured out every ounce of energy he had left as the seconds ticked off the clock. The fighters traded blows until the referee separated them as the final horn sounded. Iftimoaie turned on the heat in the final two frames to earn the Superkombat and WKN Super Diamond cruiserweight titles.

Despite the furious action in the ring, the biggest story of the event wasn’t the fight itself. Instead, it was the record setting attendance that garnered an astounding 34,000 people in Comănești. The previous record was set over nine years ago at the Amsterdam Arena in the Netherlands during the K-1 World Grand Prix 2007 in Amsterdam. The record attendance eclipses the previous record for a kickboxing event in Europe by nearly 9,000. The next biggest attendance was another K-1 World Grand Prix event held in 2008 with an attendance of 20,000.

For comparison purposes, the event featured 10,000 more audience members than the open air event, M-1 Challenge 49: Battle in the Mountains, which broke a Russian combat sports attendance record for an outdoor audience of 23,255 in Ingushetia. GLORY, one of the world’s largest kickboxing promotions, made its first trip to Amsterdam this past December with its two biggest hometown draws, Nieky Holzken and Rico Verhoeven, for GLORY 26. The reported attendance for the event was 8,000.

The largest ever audience for a kickboxing event was the combined combat sports event, K-1 PREMIUM 2002 Dynamite!!. A reported 91,107 packed the Tokyo National stadium for the first of many New Year’s Eve combat sports events to feature massive crowds over the past decade. The popularity of the sport has fallen drastically since the loss of Pride Fighting Championships and the fallout of K-1’s sale.

The record attendance in Romania has many kickboxing fans hopeful for the sport’s future in Europe and around the world. Iftimoaie was the biggest draw for the Romanian fans on Saturday night, but the future is bright with more and more promotions making positive gains over the past two years. The new record attendance may remain intact as other promotions hold events in Europe, however one of the leading Chinese kickboxing events, WLF, is promising its Glory of Heroes 5 event scheduled for Oct. 1 will have a attendance of 60,000 fans at the Henan Olympic Center in Zhangzhou, China.

Whether the attendance record will ever be matched again, the promotion can certainly call this a win for not only Superkombat’s future, but for the future of kickboxing.