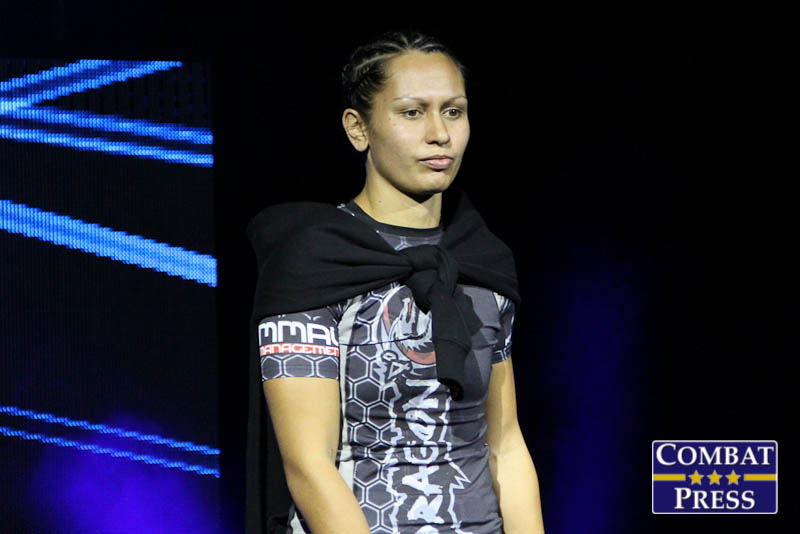 The UFC is focused on women’s divisions between the 115- and 135-pound range. Women who are lighter or heavier have a choice: continue to fight outside the UFC or change weight classes in an attempt to make it into the Octagon. Faith Van Duin appears to be choosing the latter route. The New Zealander is leaving the featherweight division behind when she takes to the cage at BRACE 41, where she’ll clash with Charlene Watt, who comes from the opposite direction as a former flyweight.

Van Duin, who made her pro debut in 2013, has spent her entire career fighting at or near the featherweight limit. That career started on the New Zealand regional circuit and quickly moved to Storm MMA. Along the way, Van Duin ran up a 4-1 mark with wins over Arlene Blencowe and Kate Da Silva and a loss to Blencowe. Van Duin’s performances caught the attention of Invicta FC, which brought her in to meet Charmaine Tweet. Tweet failed her medicals, though, and Van Duin was eventually rescheduled to meet Amanda Bell at Invicta FC 12. “The Immortal” submitted Bell and earned a title shot against Cristiane “Cyborg” Justino. Cyborg ended Van Duin’s title aspirations in 45 seconds and sent the 29-year-old to a new weight class.

Watt, a fellow New Zealander, made her pro debut in 2014 with a loss to the aforementioned Da Silva. She rebounded with six straight wins. Along the way, the 29-year-old ran through the Princess of Pain flyweight tournament with a submission of Gaela Nixon and striking finishes of Barbara Verlinden and Hera Tamati. Her next stop was a flyweight title challenge against Terissa Wall under the XFC Australia banner. Watt finished Wall via strikes to capture the gold.

The level of their competition is the most glaring difference between these two new additions to the women’s bantamweight division. Van Duin has clashed with top locals Da Silva and Blencowe before going on to meet Bell and Cyborg. Watt, meanwhile, lost to Da Silva and hasn’t seen another notable name in her career. Further adding to Watt’s struggle in this match-up, she’s going to be smaller than Van Duin, who is coming down a division while Watt is moving up. Watt’s biggest weapon, her striking, might not translate as well against a fighter who is used to eating shots from featherweights.

Van Duin needs a fresh start at bantamweight, and this is the perfect way to kick things off. She’s back on home turf against a tough opponent. Van Duin should be able to use her size and power to contain Watt’s attack. Unless Cyborg ruined Van Duin’s chin, don’t expect Watt to turn in a knockout. Van Duin is probably going to take a conservative approach, which may limit her chances at a submission but should allow her to lock in a decision victory.

Fedor Emelianenko is rumored to be close to a deal with the UFC. If we had a nickel for every time we’ve heard that, we’d be rich. For now, the closest the Russian star will come to fighting under the UFC banner is at this weekend’s Eurasia Fight Nights 50 event, which airs live on UFC Fight Pass. Emelianenko’s opponent for the heavyweight fight, which tops a strong bill that also features undefeated former Bellator heavyweight champ Vitaly Minakov, is well-known UFC brawler Fabio Maldonado.

Emelianenko’s credentials hardly bear repeating, considering how well known he is to fans. He’s a legend who climbed to the top of the heavyweight mountain during Pride’s heyday. He has defeated the likes of Antonio Rodrigo Nogueira, Mirko “Cro Cop” Filipovic, Mark Hunt, Mark Coleman, Tim Sylvia and Andrei Arlovski. His downfall came in Strikeforce, where he withstood a tough test from Brett Rogers before dropping three straight to Fabricio Werdum, Antonio “Bigfoot” Silva and Dan Henderson. “The Last Emperor” returned to the win column on the international circuit with a decision nod over Jeff Monson and stoppage victories over Satoshi Ishii and Pedro Rizzo before hanging up his gloves in 2012. Emelianenko couldn’t stay away, however, and returned to action in late 2015 under the Rizin Fighting Federation banner, where he claimed a victory over the greatly outmatched Jaideep Singh. This will be only his second fight since coming out of retirement.

Maldonado, who made his pro debut in 2000, blazed his way to a 17-3 mark before landing inside the Octagon in 2010 as a light heavyweight combatant. He’s had a rocky road ever since, but his toughness and brawling style have endeared him to fans and allowed him to remain on the UFC roster through some tough times. After winning his Octagon debut against James McSweeney, the Brazilian dropped his next three fights. However, the UFC decided not to release the fighter, and Maldonado responded with a set of three wins at light heavyweight and then moved up to heavyweight for a fight against rising contender Stipe Miocic. Maldonado was put away in the first round by the future UFC champion, then bounced around in weight for his next three fights, two of which were losing efforts.

Emelianenko has a background in sambo and judo, and Maldonado came from a path that took him through the amateur boxing ranks. However, as mixed martial artists, these two men can get wild. They like to swing for the fences, and each has plenty of knockout and TKO wins on their resume. Maldonado can take a lot of punishment, but he sometimes fails to dish out as much as he takes.

This will be one of Maldonado’s rare trips up to heavyweight, but Emelianenko is a small fighter within the division. The bigger question is whether Maldonado can deliver the same type of bruising punishment as Bigfoot or Henderson managed against Emelianenko, because, let’s face it, he’s not going to deliver a repeat performance of Werdum’s submission win over the legend.

Given Emelianenko’s choice of opponents here, this could perhaps be the real deal of a final tuneup fight before he lands in the Octagon. He’s chosen to take on a worthy UFC veteran and not a green fighter like the aforementioned Singh. This would be the type of fight where Emelianenko would have been an overwhelming favorite at the height of his career. Now, however, Maldonado’s bruising style has to be considered a fair match for the legend. Yet, it’s still difficult to pick against Emelianenko’s wild combination of striking and ground game. Maldonado will put up a fight, but he’ll pay for it in blood before succumbing to a TKO finish.

Two-plus years and a current title reign. That’s an awfully long time to fight under the Resurrection Fighting Alliance banner without a call-up to the UFC. RFA featherweight champion has to be hoping things change after his next RFA fight, a title defense against Bobby Moffett set for Friday’s RFA 39 headliner.

Barcelos, who made his pro debut in 2012, was a Shooto Brazil featherweight champion early in his career. The 30-year-old has made four appearances under the RFA banner and was scheduled to make a fifth earlier this year in defense of his title belt. He defeated Tyler Toner on the scorecards in his promotional debut, suffered a submission loss to Mark Dickman in his sophomore outing, rebounded with a first-round knockout of Jamal Parks and then claimed the title with a unanimous nod over Ricky Musgrave. The Nova União export was to defend the crown against Landon Vannata, but Vannata failed to make weight and the fight was scrapped. Barcelos has compiled five wins via strikes and one victory by way of submission. The breakdown of his finishes can be misleading, though. He has trained in Brazilian Jiu-Jitsu since a very early age under his father, Laerte Barcelos, and holds the rank of black belt. He has a dangerous jiu-jitsu base and strong takedowns, but he can be lethal on his feet as well. He has dismantled opponents with everything from short jabs to flying knees. João Herdy Jr., Erinaldo Rodrigues and the aforementioned Parks can all testify to the ferocity of the Brazilian’s attack. The only time Barcelos lost, he struggled against the wrestling of his opponent. The Brazilian’s well-rounded game gives him a number of routes to victory in any fight.

The 26-year-old Moffett made his pro debut in 2013. He submitted his first four opponents before suffering his lone pro loss via decision against Kenny Jordan, who was an undefeated 3-0 prospect at the time. Moffett responded with another four-fight winning streak that included one finish via strikes, two choke submissions and a decision nod. “The Wolfman” has only made one appearance under the RFA banner when he met and defeated Dan Moret. Moffett has a wrestling base and a strong submission game, but he is still evolving on the feet.

Moffett will enjoy a significant height and reach advantage — four inches and four and a half inches, respectively — over the champ. The problem is that Moffett’s stand-up is still a work in progress, whereas Barcelos, a grappler, has a deadly striking arsenal to accompany his elite jiu-jitsu skills. Unless Moffett can use his wrestling to keep the fight on the feet and then stifle Barcelos while staying on the outside, things don’t look promising for the challenger.

As is often the case for Barcelos at this and his previous levels of competition, everything his opponent does well, he can do better. Moffett’s best chance is to utilize his reach to his advantage, but Barcelos will seek to close the distance and either throw strikes in close or shoot for the takedown. Moffett, while a solid title challenger, is likely to end up on the mat with Barcelos. That’s going to be a nightmare for the American, who will be lucky to survive to the final bell. This one goes the Brazilian’s way, most likely by submission.