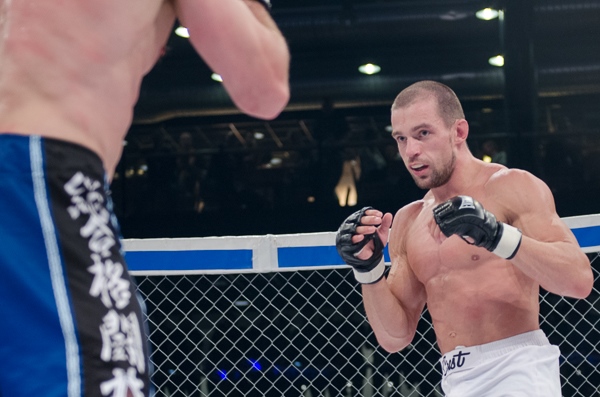 An undefeated record looks great. However, it looks even better when the fighter has notable names on his resume. Enter Felipe Silva and Anton Kuivanen. Silva is the undefeated prospect in this equation, but his first true test comes in the form of veteran competitor Kuivanen. The lightweight pair meet in the headlining bout of Cage MMA’s 35th offering.

Silva’s undefeated mark started with a 2013 pro debut win over fellow rookie competitor Alexandre Costa. He added three more finishes via strikes over the course of the next year and a half. Silva’s fifth pro bout went the 15-minute distance before the Brazilian was awarded the decision. He returned to his quick finishing ways with his first submission victory in his most recent bout, an October victory over Carlos Irigoitia. The biggest knock on Silva’s record is his level of competition. His most experienced foe had just eight fights under his belt and sat two wins above the .500 mark. He’s mostly fought newcomers and subpar opposition. The CM Systems product is 31 years old and will be making his first trip to Europe.

Kuivanen is the perfect next test for Silva. The Estonian-born Finn has a lengthy resume dating back to his 2006 pro debut. After accumulating a 16-4 mark on the European regional circuit, Kuivanen received a call-up from the UFC. He only went 1-2 during his Octagon tenure, with a win over Mitch Clarke and losses to Justin Salas and Michael Chiesa. He’s had a rocky transition back to the regional scene, tallying just a 6-3 mark since his UFC departure. Kuivanen’s post-UFC docket includes losses to Eric Reynolds, Dakota Cochrane and Thibault Gouti and wins over Jason Pierce, Sean Carter and Reynolds. The GB Gym product is 32 years old and holds the rank of black belt in karate. He has stopped six opponents with strikes and eight by submission, but he has also lost three fights by way of submission and five via strikes.

If Silva wants to prove that he is a legitimate prospect, then a win over Kuivanen will go a long way to proving his point. The Finnish fighter has more than 30 fights under his belt and can stop opponents in a variety of manners, or simply take the decision win. Silva has the striking ability to test Kuivanen’s chin, and he could be a threat to the well-traveled fighter on the mat as well. However, Kuivanen’s experience cannot be discounted. He’s seen far tougher and more proven opponents and handed those men losses.

Silva is a far cry from the veteran foes who have handed Kuivanen his recent defeats. The veteran should overcome the prospect in a grueling battle that goes everywhere. Kuivanen takes the decision nod.

The 25th edition of the British-based BAMMA promotion is dubbed “Champion vs. Champion,” and its titular battle is one of the more intriguing fights to ever top a BAMMA bill. The bout features Shay Walsh’s defense of his bantamweight title, but it’s his challenger, BAMMA featherweight kingpin Tom Duquesnoy, who is likely to receive the bulk of the attention heading into fight night.

Duquesnoy is the league’s super prospect. BAMMA’s featherweight champion dropped to bantamweight for his last contest after successfully defending his title in his previous two fights. The “Fire Kid,” who is still just 22 years old, destroyed Damien Rooney via strikes in just 82 seconds to post a successful bantamweight debut and advance to this title tilt with Walsh. Duquesnoy has compiled an impressive 12-1 mark that includes victories over Teddy Violet, Krzysztof Klaczek and Brendan Loughnane. His only loss came in his fifth career outing, where he suffered a submission defeat at the hands of Makwan Amirkhani, who is now undefeated through three UFC fights. The young fighter has trained in combat sambo since age 12, has worked his wrestling with the French national team and has traveled to gyms in Europe and the United States to further hone his skills. One of his recent landing spots was Albuquerque, N.M., andt the Jackson-Winkeljohn camp. He has a very well-rounded game and few flaws.

The English-born Walsh may not carry quite the buzz of his challenger, but a 14-3 mark isn’t exactly an embarrassment. This Tiger Muay Thai fighter debuted in 2010 and won his first six fights, including four by some form of knockout and one via submission. His first loss came against future UFC fighter Andy Ogle. Walsh bounced back with two victories before suffering his second loss against another future UFCer, Artem Lobov. After another two wins, including one against the then-undefeated Saul Rogers, Walsh suffered his most recent loss to future Bellator combatant Andrew Fisher. He responded with two more featherweight victories before taking the same BAMMA path Duquesnoy is now on by dropping to bantamweight and winning one fight before challenging for the crown. In Walsh’s case, the title challenge came against undefeated champ Ed Arthur. Walsh outworked Arthur to take the decision and hand Arthur his first professional loss. This will be Walsh’s first attempt to defend his belt.

Walsh is a top BAMMA fighter, but he’s stumbled when he’s fought the level of competition worthy of moving on to the world’s biggest stages. Ogle decisioned Walsh, and Lobov and Fisher scored TKO stoppages of the Brit. If these fighters could edge Walsh on the feet and the scorecards, then Duquesnoy has an excellent chance of following suit. Walsh’s chin has been targeted in the past, and it will falter here against the striking of the young Duquesnoy.

While Felipe Silva seeks to overcome a UFC veteran on one side of the globe, another prospect looks to do the same half way around the world. That someone is Yoon Jun Lee. The 10-2 up-and-comer has a tough task on his hands when he faces George Roop, an even more accomplished UFC veteran than Silva’s opponent, Anton Kuivanen. Lee and Roop will lock horns in a featherweight co-headliner at Road FC 31.

Lee isn’t like the other prospect in this preview feature, however. Unlike Silva, the South Korean has seen a steady barrage of accomplished veteran competition. He made his debut in 2010 with a loss to Rafael Dias, then returned in 2012 and reeled off two low-level wins before stumbling against sub-.500 fighter Min Jong Song. Lee has been perfect since, but the more notable aspect of his run is the level of competition he has overcome. Lee decisioned veteran Takafumi Otsuka to kick off his winning streak. His second big win came against Makoto Kamaya. After another low-level win, Lee returned to his trend of beating veterans as he rolled past Kosuke Terashima, Thiago “Manchinha” Silva, Kil Woo Lee, Je Hoon Moon and Mu Gyeom Choi. The Chan Sung Jung disciple captured the Road FC bantamweight crown in 2014 and defended it in 2015, but he has been competing as a featherweight in his more recent outings.

Roop is a well-known name to UFC fans. The 6-foot-1 featherweight starred in season eight of The Ultimate Fighter after entering the show as an 8-3 prospect. Roop won his first two fights before losing to eventual season runner-up Phillipe Nover. After a 1-2 UFC tenure, Roop was sent packing and, following a regional win, landed in the WEC, where he went 1-1-1 before rejoining the UFC. Roop had an extended second stay inside the Octagon, but he struggled to find consistency. He went 3-3 through his first six fights, including notable wins over Josh Grispi and Brian Bowles. His final four UFC outings garnered Roop just one victory and three defeats. The 34-year-old Apex MMA fighter is tall for his division and uses his length well on the feet and the ground. However, he has just four wins each via strikes and submissions. Meanwhile, he has also suffered four losses by way of strikes and has been submitted four times.

Lee can’t be counted out in this contest. It’s Roop’s first fight since departing the UFC and he’s shown holes in all elements of his game. Lee won’t be much of a threat to Roop on the mat, but a knockout is always a possibility. Still, despite Lee’s recent run over veteran opponents, Roop might be too much for him. The UFC and WEC veteran fights long and can create headaches for any featherweight he faces. Lee was submitted twice early in his career, and Roop just might have the grappling and wrestling skills to add to that total.