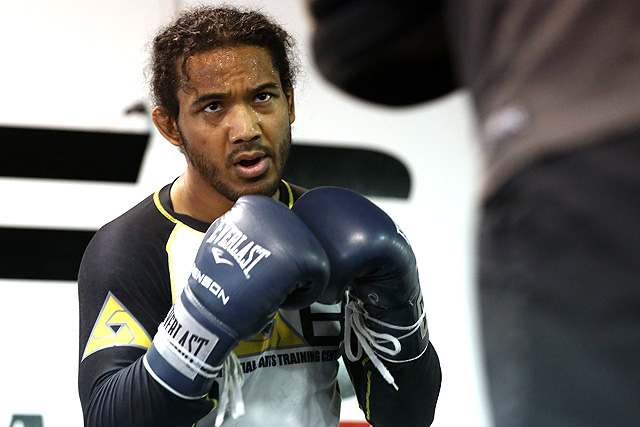 When former UFC lightweight champion Benson Henderson signed with Bellator, he was gifted a lot by fans and pundits.

Henderson was gifted victories. People believed he would steamroll just about any and everybody on Bellator’s roster.

He was gifted not just one championship belt in Bellator, but two belts. Henderson’s most notably known as a lightweight, but he has bounced up to welterweight in recent years, including in his final two UFC victories over Brandon Thatch and Jorge Masvidal. He did so again in his Bellator debut against Andrey Koreshkov.

It was seen as a forgone conclusion that Henderson would beat Koreshkov for the Bellator welterweight belt. It was merely a formality after Henderson’s signing with Bellator. However, Koreshkov went on to a pretty easily earned decision victory over the former UFC champion.

The loss broke Henderson’s two-fight winning streak. Those two wins came at welterweight, including a victory over the much bigger Thatch. It was easy to think Henderson could simply overcome the size disadvantage against Koreshkov. He couldn’t, though.

Again, that is where those people who want to make predictions will be wrong.

This isn’t the first time Bellator fighters have succeeded against some of the best in the UFC or excelled outside of the promotion. Ben Askren has been pretty dominant in ONE FC. Hector Lombard has found some success in the UFC after being one of Bellator’s most dominant champions. And then there’s probably the biggest name of note on this list, former Bellator lightweight champion Eddie Alvarez. Alvarez is on his way to a lightweight title shot against UFC champion Rafael dos Anjos.

Henderson himself isn’t even a stranger to this outside talent beating the UFC talent. In fact, he is the very product of this model. Henderson made the move from the WEC and instantly went on a tear and beat a lot of the best lightweights on the UFC roster.

Henderson’s first Bellator fight didn’t go his way, sure, but the future could be bright if he makes the jump back down to his rightful home at lightweight. In the 155-pound division, Henderson has the size advantage and was a dominant force in one of the deepest divisions on the UFC roster. His last two fights in the UFC looked good at welterweight, but it’s lightweight where he really shined and captured the lightweight title.

Bellator’s lightweight division is arguably its deepest. With the likes of Michael Chandler, Josh Thomson and, most notably, lightweight champion Will Brooks, Henderson might face stiffer competition. That hasn’t fazed the former champion before.

The biggest issue with the Koreshkov fight was that Henderson just simply couldn’t hit the champ. Thatch had a huge size advantage, too, but Henderson was able to sap his stamina and beat him around every corner after the first round. Henderson couldn’t duplicate that success against Koreshkov. His best method of victory during the fight would have been on the ground, but Koreshkov simply didn’t let him get close enough, clipping him with shot after shot. It’s actually very surprising Henderson went as long as he did. It just shows how tough the former champion is.

That disadvantage doesn’t exist for Henderson at 155 pounds. The 15-pound difference is huge. Henderson is more evenly matched with lightweight fighters in terms of size. Brooks won’t be an easy out and is probably going to be a much tougher test than people realize, but knowing Henderson and who he has beaten at lightweight, there is a reason why he is still considered one of the best lightweights on the planet. We can be quick to write his move to Bellator off as a failure, but a move to 155 pounds could make all the difference in the world.