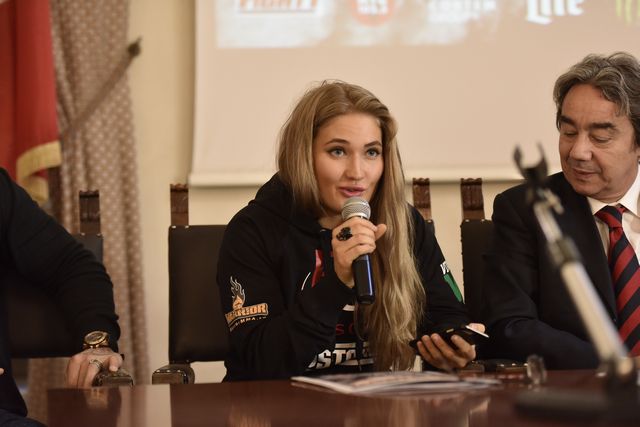 You always hear stories about “tough guys” who walk into a mixed martial arts gym and are certain they can hang with those who compete for a living, only to be quickly humbled. Thankfully, humility is a strong suit of one of Bellator MMA’s newest signees.

Anastasia Yankova, an undefeated pro through two fights, makes her promotional debut at Bellator 152, which takes place at the Pala Alpitour in Torino, Italy, on April 16. She already has two submission victories under her belt, but she’s not letting it go to her head.

“I’m not delusional and I know [I have] much to learn in MMA,” Yankova told Combat Press.

Yankova, a flyweight, started training karate at age six in her native Moscow and competed in Kyokushin karate until age 14. After taking a break to return to her studies, she met her Muay Thai coach at a local fitness club and started training in Thai boxing, which led her on the path to competing in professional kickboxing and MMA.

Yankova currently trains at American Kickboxing Academy Thailand under Brazilian Jiu-jitsu black belt Marcio “Gracinha” Cesar. While she boasts experience in other combat sports, including the title of Russian Muay Thai champion, Yankova is fully focused on her MMA training.

“I train very hard and I’m hoping that soon it will become apparent to my coaches and training partners,” she said. “But I also have tremendous respect for this sport and all of its many facets, and I know that in addition to hard work, you need time.”

Yankova weighed multiple offers before deciding to sign with Bellator.

“[Bellator] made the most interesting offer,” she said. “I liked their open-minded approach. Flyweight is a very competitive class, and I look forward to many tough and interesting fights there.”

Yankova’s Bellator debut will come against Anjela Pink, who will be making her professional MMA debut. Yankova admittedly doesn’t know much about Pink, besides the fact that she has two amateur fights on her resume. Yankova added that she trained in the United States, as Pink did.

“The level of MMA training there is high,” said Yankova. “I know the dangers of underestimating your opponent, whether she has two fights or 10. It doesn’t matter to me. I always train to be 100 percent.”

Bellator also announced earlier this year the formation of its new kickboxing division, which will feature notable kickboxers like Joe Schilling and Melvin Manhoef, who also compete in Bellator MMA. Given Yankova’s experience in the sport, you would think she might explore being a two-sport athlete.

“Right now, I’m more interested in MMA,” Yankova said. “I am focused on working on my weaknesses, which are grappling and wrestling. I like it and it takes up all my time, but I don’t close the door on also having kickboxing fights down the line. Time will tell.”

However, Yankova is excited about Bellator joining the kickboxing business.

“I think Bellator will take kickboxing to new levels of popularity, especially in the U.S. where it’s still not very popular,” she said. “I think kickboxing is a great sport. I think it’s more visually stimulating than even boxing. But that said, its commercialization has not been very successful. But I’m certain that [Bellator President] Scott Coker’s experience in combat sports, along with the amazing staff at Bellator taking on this task, will help kickboxing reach new heights in a few years.”