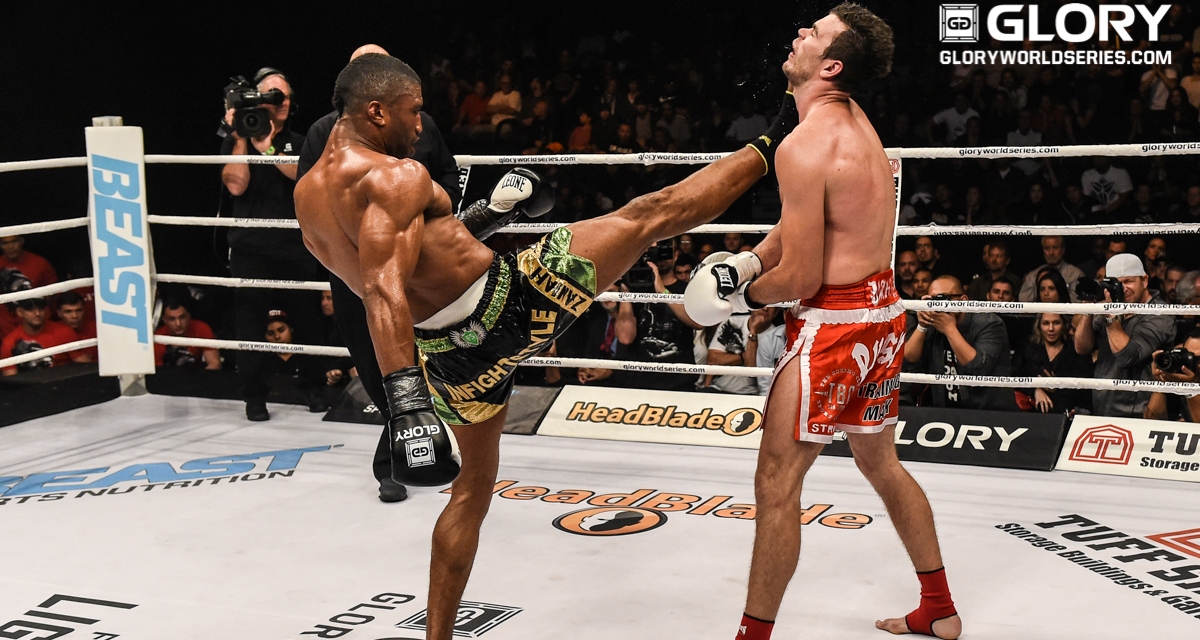 The competition for the biggest story of 2015 in kickboxing was hotly contested between the top promotions in the world. The biggest news of the year came from every corner of the globe. A poisoned fighter returned to the top ranks of Muay Thai in Thailand, while superstar fighters joined and fought under multiple banners in Europe and Asia. Brothers fought each other for a world title in one of the top promotions in the world, not once, but twice.

The biggest news in the kickboxing world, however, took place in the western hemisphere. The television ratings, contract negotiations and surprise, last-minute signing factored into what the Combat Press staff believed was the biggest story of 2015.

GLORY started the year off with the second best rated show in the company’s history behind GLORY 13, averaging 542,000 viewers for GLORY 19: Virginia. The next GLORY event, GLORY 20: Dubai, took a hit when Spike TV aired the event on a tape delay to compensate for the time difference for the American audience. The event produced a 34 percent decrease in viewership from the previous event with the change from a live broadcast to the tape-delay broadcast at 10 p.m. ET. The broadcast, watched by an average of 359,000 viewers, went head-to-head with two NBA regular season games, Oklahoma City vs. Memphis and the Los Angeles Lakers vs. Portland.

GLORY returned to the United States for the promotion’s third highest viewed show, GLORY 21: San Diego. The fight card, which featured the GLORY middleweight championship between Artem Levin and Simon Marcus, drew 517,000 viewers during a live broadcast at 11 p.m. ET on Spike TV. The exciting show featured four finishes and peaked at 797,000 viewers. This would be the last event to receive significant promotion from Spike TV, and the numbers don’t lie.

GLORY returned to Europe for GLORY 22: France on June 5, but that meant American viewers were left with either a tape-delay broadcast or a mid-afternoon live broadcast. The 4 p.m. ET live broadcast led to GLORY’s lowest ratings in the promotion’s 14-event partnership with Spike TV, a lowly 155,000 viewers. Despite the poor rating in the United States, the emergence of Sitthichai Sitsongpeenong and Rico Verhoeven did not go unnoticed by the fans internationally, with Europe still being one of the world’s largest consumer of kickboxing events.

The promotion returned stateside for GLORY 23: Las Vegas, featuring the GLORY welterweight championship between Nieky Holzken and Raymond Daniels. The return to the “fight capital of the world” garnered 295,000 viewers in an 11 p.m. ET time slot on Spike TV.

The world’s second-largest mixed martial arts promotion, Bellator MMA, teamed up with GLORY for a dual-sport event featuring the GLORY ring and Bellator cage. The event aired in a favorable 9 p.m. ET time slot, but the event featured tough competition in the sporting world. The event, titled “Dynamite,” drew 800,000 viewers when it went head-to-head with ESPN’s broadcast of an SEC rivalry game between this year’s national champion Alabama and close geographical neighbor Ole Miss. Chunks of the broadcast went against other college games, including Texas Tech vs. Arkansas and UCLA vs. BYU. The event was considered a failure, giving the sense that GLORY’s time with Spike TV was going to be short-lived.

The success didn’t translate to the next event, the scarcely promoted final event on GLORY’s contract with Spike TV. GLORY 24: Denver, headlined by Bellator MMA and GLORY middleweight contender Joe Schilling’s win over top-10 kickboxer Jason Wilnis, drew an average of 283,000 viewers. The last show on the Spike TV contract wasn’t promoted like past events and aired once again in the 11 p.m. ET time slot against the MLB playoff game between the New York Mets and Los Angeles Dodgers, providing the event with tough competition in two of the biggest sports and television markets in the country.

The combination of poor promotion and poor head-to-head match-ups with popular U.S. sports has led to the diminished viewership over the span of 2015. The split between GLORY and Spike TV led to what looked like serious trouble for the promotion and possibly the lowest point in GLORY’s four-year history.

The biggest changes for the promotion came on short notice. A last-minute deal struck with “the worldwide leader in sports” ESPN led to GLORY 25: Milan being aired live on ESPN’s online streaming platform, ESPN3, at 4 p.m. ET. The event aired on ESPN2 in a late-night slot two days later. It featured the GLORY lightweight championship and drew 198,000 viewers during the broadcast at 1:30 a.m. ET on Monday morning. Despite the lower number of viewers and the late-night airing, the promotion considered the numbers a success for the last-minute deal with the ESPN networks.

GLORY returned to Europe once again for its final event of 2015. GLORY 26: Amsterdam featured two title fights and the featherweight contender tournament. The event, which was considered for Combat Press “Event of the Year,” was once again aired live on ESPN3 at 4 p.m. ET for the American audience. The broadcast re-aired on ESPN2 at 8 p.m. ET on Sunday night, and once again went up against heavy-hitting competition, this time from the NFL. The event took a slight drop in viewers from the previous tape-delay airing on ESPN2, earning 168,000 viewers going against NBC’s Sunday Night Football.

With many ups and downs in 2015 for the world’s top kickboxing promotion, GLORY is set to build on its successes from the final two events of the year. Questions will be answered in the coming months as GLORY continues an attempt to grow the sport of kickboxing in the United States or be forced to make the promotion’s move to Europe a permanent one. GLORY’s transition from Spike TV to ESPN was the biggest story in kickboxing in 2015 and will continue to be a story well into 2016. GLORY returns for the first time in 2016 on Friday, Feb. 26, with GLORY 27: Chicago featuring the GLORY middleweight championship between defending titleholder Artem Levin and challenger Simon Marcus.

Other finalists: Urabe brothers fight each other for world title twice in K-1, Yodsanklai Fairtex and Buakaw Banchamek sign with Kunlun FC