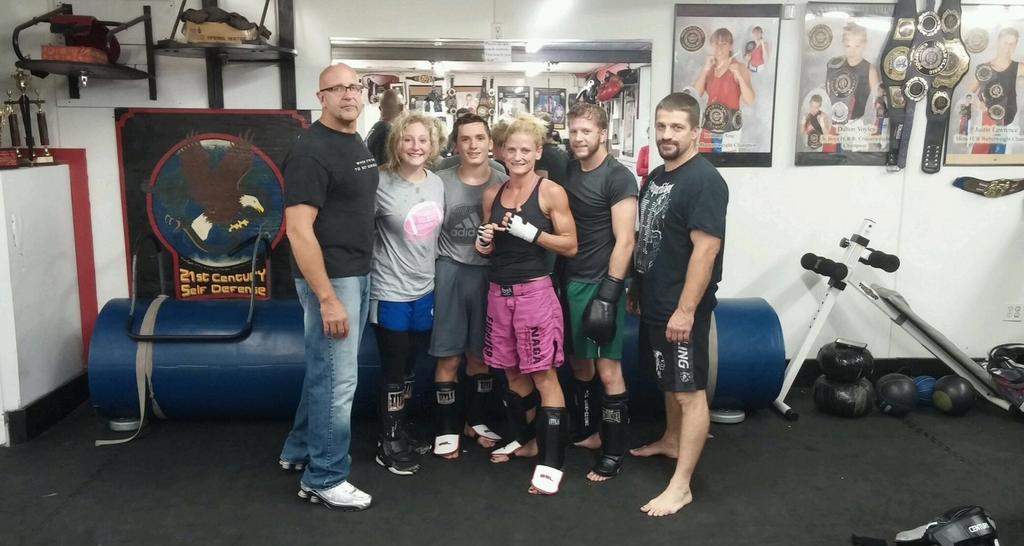 A mom who carries a piece and knows how to kick people’s asses? Sounds like anybody’s worst nightmare, right? Whether or not Rebecca Ruth wants to project that image, it is simply who she is.

Just to clarify, Ruth is one of the most energetic, nicest people in the sport. But in the mixed martial arts cage, this is one fighter who has delivered one-sided beatdowns in four of her five professional bouts.

It’s amazing how a girl from a small town on the outskirts of St. Louis who is also raising two kids and working as a full-time armed security guard at a nuclear clean-up facility can become such a fierce competitor at a relatively late age compared to some of her opponents.

“I started out just going to the gym to work out,” Ruth told Combat Press. “I had my son, so that was at least 12 years ago. I just wanted to work out and get rid of some of the fat. I have always played sports, [but] I had no intentions of fighting, whatsoever. After a while, hitting some of the bags and going to see some of the girls fight, the competitive side of me took over and I was like, ‘I think I can do that. I just want to try it.’

“After the first exhibition fight I had, I was hooked and ready to go. And then it was kickboxing. So I did quite a bit of kickboxing and had a couple boxing matches and wanted to go further with that. At the time, the only thing that was interesting me was MMA, so I put on the MMA gloves and started learning jiu-jitsu and wrestling. Here I am.”

Here she is. At age 36, Ruth has racked up a respectable 4-1 pro record with four TKO finishes in the first or second round. All of this MMA success has come in the last 18 months, while she has also been busy raising a son and a daughter and holding down a full-time job. So, what does she attribute such a dominant career to?

“My coach, Benny Voyles, of course — technique, technique, technique,” admitted Ruth. “Good, solid striking, and the way he teaches it, I would think, is far ahead of the game. He is definitely a world-class coach, and he has been with me from the beginning until now.”

Voyles is the owner and head trainer at 21st Century Martial Arts in Pacific, Mo. He is a fifth-degree black belt in Kenpo and is also the stepfather of up-and-coming pro standout Justin Lawrence.

Under the tutelage of Voyles, Ruth has really come into her own in a very short period of time. She is now in line for the Shamrock Promotions flyweight strap this Friday night in the co-main event of Shamrock FC: Fuel, which takes place at the River City Casino in St. Louis. Only, this fight has a little more on the line than just a title. The winner also gets a newly minted Bellator contract. That is a huge step for Ruth, whose pro debut was in April 2014.

“Shamrock had announced a while back that they were going to do this, where it was going to be that any professional fight that was going to be for a title would also get the opportunity for a Bellator contract,” explained Ruth. “There may have been one or two that have already gone through. Don’t quote me on that, because I’m not 100 percent sure, but I know that the night of my fight, there’s going to be two of them. The main event and the co-main event are both for titles and contracts.”

Standing across the cage from Ruth for this amazing opportunity will be Alice Yauger. She is also 36 years old. Yauger fights out of Texas and is 2-3 as a pro. Records aside, Ruth is expecting nothing less than a very difficult opponent.

It can be difficult to keep her head on the task at hand with such a large claim to stake this Friday night, but Ruth does her best to maintain focus.

“I try not to think about that,” Ruth elaborated. “It’s definitely in the back of your head at all times, but, for now, I just need to get through this fight before I can think about anything beyond that. Being that it’s a title fight, you add on two more rounds, and that’s quite a bit of work. I’m just training for everything, training for the extra rounds, and praying that everything goes my way that night.”

Regardless of the outcome, Ruth is ready to go to battle for the Shamrock flyweight belt. The mother of two has a lot on her plate and even more to fight for. The Bellator contract just sweetens the pot. While her parents, brothers, kids and other supporters watch closely, she will be putting on the performance of her life.

“Any girl fight is going to be exciting. I think everyone expects that. With Alice and I, it’s going to be a stand-up war, which is what people want to see. I think we’re both definitely going to bring it. I know we’ve both been working our asses off, and it’s going to be a good fight. We’re eager, we’re hungry and we want this.”

Ruth would like to thank her mom, dad, brothers, kids, trainers and everyone who has helped her achieve her dreams of being a pro fighter. She would also like to thank her sponsors: A1 Roofing, Reeder Construction, Bill Martin Concrete, XXI Century Martial Arts, Finney’s, Vinyl Images, Jesus Saves, VonAllmen Capital Investors, Pacific Lumber, Covert Concrete, MCS Midwest Diesel and Jaco Clothing. Follow Rebecca on Twitter: @RebeccaRuthMMA
Advertisement