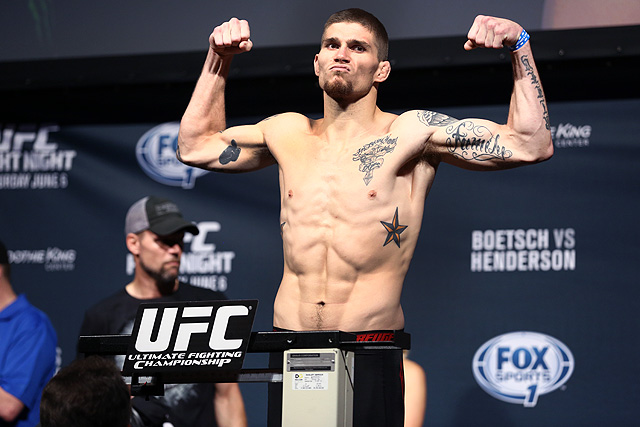 The UFC’s inaugural trip to South Korea has added another bout.

Combat Press has learned from sources close to the situation that middleweights Dongi Yang and Jake Collier will lock horns at UFC Fight Night 79 on Nov. 28.

South Korea’s Yang will be making his promotional return. The 30-year-old, dubbed “Ox,” went 1-3 in a previous run inside the Octagon. He was released following back-to-back losses to Court McGee and Brad Tavares. Yang bounced back with two straight TKO wins in his homeland, most recently topping UFC veteran Dennis Hallman in April. Eleven of Yang’s 12 career wins have come via strikes.

Collier, meanwhile, will look to build on the momentum of his decision win over Ricardo Abreu in June. The 26-year-old Missouri product fell short in his promotional debut last December, but the former RFA titleholder returned to the win column in his sophomore outing. Collier has scored stoppages in seven of his nine career wins.

UFC Fight Night 79 takes place at the Olympic Gymnastics Arena in Seoul, South Korea, on Saturday, Nov. 28. The event will be headlined by former UFC lightweight champion Benson Henderson and former welterweight title challenger Thiago Alves. Broadcast plans for the event have yet to be announced by the promotion, but a stream on UFC Fight Pass is likely for North American viewers.