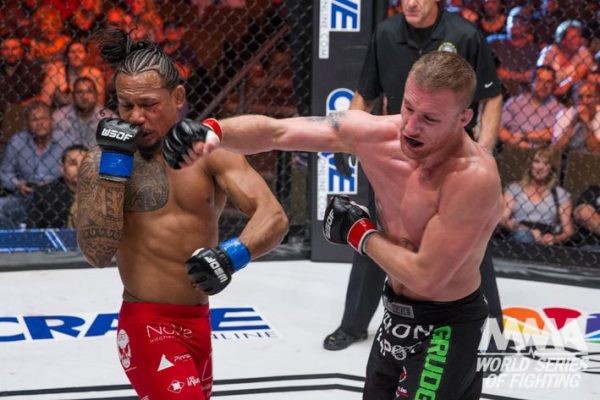 Justin Gaethje. What does this name bring to mind?

Jaw-dropping amounts of violence in each and every fight he has been a part of since he burst onto the national scene in the World Series of Fighting.

All of these responses are spot-on. This has only continued as he has made his two-fight foray into the UFC. Now, Gaethje is getting ready for his third outing. He’ll stand opposite former ranked featherweight and current ranked lightweight Dustin “The Diamond” Poirier.

Usually the discussion surrounds Gaethje and the violence he hands out. Let’s not shy away from that, but here’s a different take on the former WSOF lightweight champ and how his fighting style and specific techniques allow him to minimize the effect of the offensive assaults he endures from his opponents.

Unlike wrestling and grappling in MMA, striking in the sport is not a realm where we see world-class practitioners. Simply put, most fighters can’t fight off their back foot under the best circumstances, such as when they are backing up to set traps or bait opponents. Their ability to be defensively sound and offensively effective when under duress is more times than not mediocre at best. This is due to a lack of angles, absence of jabs when exiting the pocket or trying to reestablish distance, limited defensive techniques, and an inability to efficiently and effectively counter aggression with strikes.

Gaethje charges forward full bore, which means he will take a certain amount of abuse due to the nature of his attack. The abuse is only amplified by the collision created between the strikes thrown and his forward motion into them — or at least it would be if more fighters were able to stand their ground and counter or move inside the pocket and let him run himself into shots.

Think of how Tom Brady or Peyton Manning moves around in the pocket to create space and escape pressure. Well, more fighters are like Cam Newton or Michael Vick, who do their damage outside of the pocket as they look to create distance that provides a cushion from which can attack free of duress. Fighters like that aren’t able to make Gaethje pay for his forward motion. They don’t have their feet set, which limits the amount of power they generate. Also, they are completely on the defensive, which lessens their volume and opportunity to score meaningful offense.

Finally, by being on the defensive and unwilling or unable to generate any offense or disrupt Gaethje’s pressure with circling or angles, these opponents are burning an ungodly amount of energy trying to escape while being overwhelmed under a fusillade of strikes. Since they are working under duress and at a pace that is outside of what they like to work at, their technique suffers. So too does their accuracy. Eventually, their own ability to generate consistent volume falls to the wayside as well.

We can see examples of this in Gaethje’s outings against Michael Johnson in the UFC and both Melvin Guillard and Nick Newell in the WSOF.

Trapping an opponent can be hard for a fighter who likes to pressure and cut down the cage. This is especially true when a fighter is reluctant to engage or seeking to walk their opponent into a shot early to slow the opponent’s aggression or put the opponent on the back foot. Often times, an aggressor who headhunts will overextend and burn themselves out by swinging and missing or they will get countered with a fight-ending or fight-changing shot. Body shots enable fighters to slow an opponent’s rate of movement, create hesitancy in their willingness to exchange, and limit their ability/willingness to stand their ground or come forward.

Most fighters in MMA don’t attack the body at all, much less consistently. Why is this good for Gaethje? Well, you don’t learn the footwork, positioning or shot selection necessary to counter a fighter who is focused on the body overnight. Worse yet, you don’t learn how to physically absorb or mentally absorb consistent body work overnight either. This means fighters aren’t prepared to deal with the leads and counters Gaethje targets toward their body. By the time they are even somewhat effectively ready to counter or smother them, the damage is already done to their will, body and gas tank.

Since these fighters are so rarely exposed to body shots, their ability to smother, counter or even lead so they can deny the body aren’t razor sharp. Furthermore, when body shots are on the table, the range changes at which a fighter operates. Most guys don’t train or spar with a high number or intensity of body shots, so they essentially give their bodies up by being closer to Gaethje and positioning themselves to defend headshots and kicks to the body. They don’t really address punches to the body.

Once the body shots start coming, the fighters take a half or full step back. They aren’t in optimum range anymore, and all the weapons they lean on drop in effectiveness and efficiency due to the change in distance. This provides Gaethje with carte blanche to attack.

Gaethje is breaking down opponents from the word go, while they are looking to land a hail mary or fight-ending bombs. In short, Gaethje hinders their willingness to get in range to exchange. He also takes away their gas tank to make their shots wider, less effective and telegraphed. He takes their legs to hinder the amount of power and snap in their shots.

This can be seen against Johnson in the UFC and Luis Palomino in two fights under the WSOF banner.

The weakest skill set for mixed martial artists is often boxing. The shots they use are limited by a lack of technical refinement, which makes them predictable or limited in terms of creativity. When it comes to punches, most mixed martial artists are both terribly rote and stubborn. They attack where and how they have been trained to attack. They don’t attack in an organic manner based on who they are facing and what their opponent is doing.

Gaethje’s high guard works as a shield. Opponents waste countless strikes, precious energy and fight-ending power while trying to punch through and around his guard. Even when they land, the sting of the shot is either fully or partially absorbed on Gaethje’s forearms before they make impact with his face. This lessens the amount and quality of damage he takes, thereby allowing him to once again attack with impunity to force opponents back, transition into clinches and frustrate opponents.

The rolls take advantage of the mixed martial artist’s predictable striking and inability to adjust. It allows Gaethje to take the sting off shots and load up for stiff counters to the head, body or legs. As he rolls, he comes under to open up head and body striking combinations that are amplified by the fact his opponent is most likely overextending.

This can be seen in most of Gaethje’s lightweight outings.

Leg kicks are still a game-changer in MMA in a fashion similar to why body shots are a factor. No one really consistently uses them, so most fighters aren’t really prepared to defend or counter them. A powerful, creative and frequent leg kicker is going to have a field day against a large majority of fighters, from the bottom of the barrel to the top of the division. Fighters with consistent leg-kick games have done their fair share of damage. Just ask opponents of José Aldo, Joanna Jędrzejczyk, Keith Jardine, Marco Ruas, Pat Barry, Mauricio “Shogun” Rua or Melvin Manhoef. Most fighters know the counters, but they lack the temperament or technical skill set to successfully use them. Worse yet, some fighters have the durability to absorb them and remain effective.

Power in everything from football to basketball to tennis to baseball to boxing to wrestling to kickboxing to MMA comes from the legs. If you can’t sit down on your shots, then your ability to explode with them and to throw them correctly, or with power, lessens greatly. A prime Urijah Faber was hobbled and beaten up after a savage series of leg kicks from Aldo. Even champion Rose Namajunas and former champ Robbie Lawler have suffered huge damage and were on the verge of losing fights all because of the consistent leg attacks of their opponents.

These leg kicks slow a fighter’s motion, which hinders their ability to effectively set traps. Once hurt, a fighter loses the willingness to fire back due to fear of the kicks. When the fighter’s base is compromised through damage or fear of damage, then the snap and power behind their shots lessens. Even when an opponent is touching Gaethje repeatedly, that opponent isn’t touching him with anything that is really worth a damn.

We can see this in Gaethje’s UFC encounters with Johnson and Eddie Alvarez, as well as in his WSOF bouts with Brian Foster and the aforementioned Palomino.

Gaethje may never be viewed as one of the best defensive fighters in the world of MMA. However, his reputation as an offensive juggernaut has been clearly established. There is a method to his madness. It tells the story of fighter who has some defensive awareness and craft, but he uses his offense to showcase it.