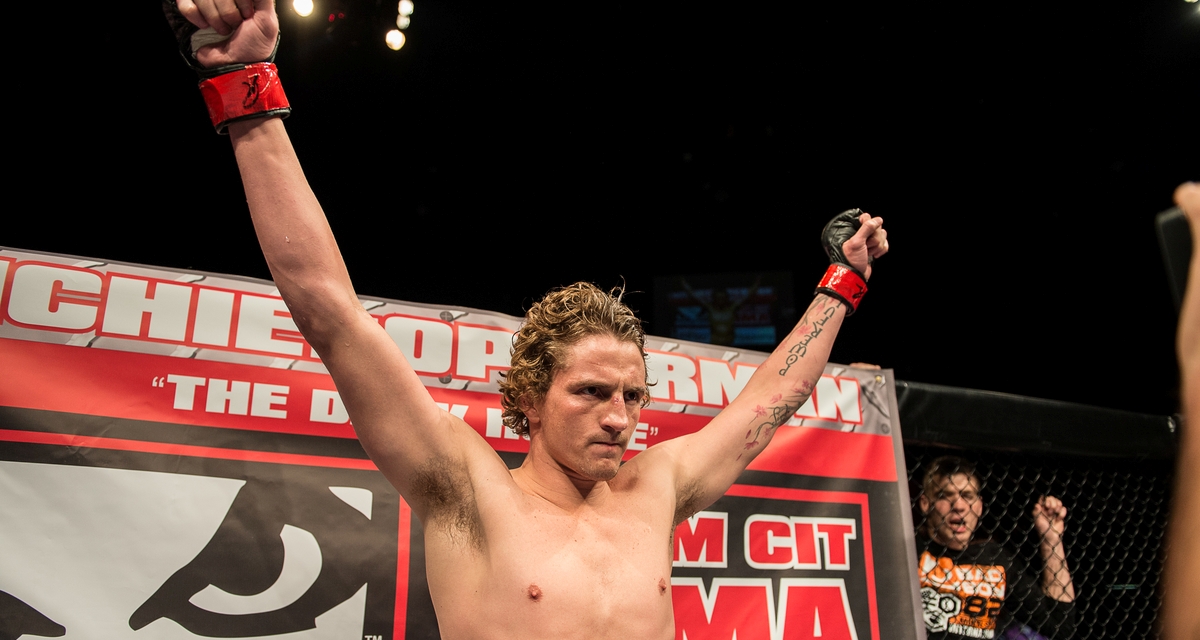 A lot can happen in 12 months, especially in the realm of combat sports. Careers can be made. Or they can be finished. Fighters can find themselves sitting on the sidelines. They can see their dreams crushed.

From early 2010 to early 2011, Michiel Opperman was experiencing a rough patch in his mixed martial arts career. The kickboxing crossover made his professional debut and succumbed to a choke. He bounced back with a victory via a choke of his own, but his next five bouts did not go well. Actually, that’s an understatement.

In six out of his first seven pro fights, the kickboxing product found himself tapping the canvas. Frustration, anger, despair — all of these emotions were more than likely swirling through his mind like a tornado leaving a path of destruction behind it. With that track record, it’s a surprise that he is fighting for a title this coming weekend. However, overcoming adversity is really what fighting is about.

Opperman could have given up. Instead, he pushed on. He got better. He learned from his experiences. Now, he is just one win away from being a champion again.

“It was not the best of starts,” Opperman told Combat Press. “But people tend to forget that five of those fights were against South African champions or previous champions across middle and light heavyweight. I showed improvement with every fight — that was all that was important to me.

“I won’t lie, it was not nice. At that stage, I felt very bad and did not know why this was happening to me. But looking back, it had to happen so that I can be who I am today as a fighter and a person.”

When all six of Opperman’s early defeats as a professional came by way of submission, the striker realized that he had to make some changes if he was going to succeed in his new sport. He went on to develop his ground game extensively. The result? The 29-year-old has not registered another defeat by submission. In addition, five of his six Extreme Fighting Championship victories have come by way of submission. It’s clear that Opperman has not only learned the ground game, but he has perfected it.

“I just kept working my ass off,” he admitted. “I think I might have lost a bit of focus on my roots, the stand-up part, which I am actually much better at than the ground game. But that is how fighting works. It goes on in circles.”

Although the ground game may have eluded Opperman in the early stages of his career, there is a very good reason for that. Opperman’s martial arts background stemmed from a very clear focus on the stand-up portion of the sport. He fell into mixed martial arts because it was a necessity so that he could still compete. By no means does he regret it, but it certainly wasn’t always his end goal.

“I started Kyokushin karate at eight years old,” he explained. “I competed in numerous international tournaments [and] was African and South African champion numerous times in my respective division. I then started K-1, where I won the African light heavyweight title. Then I moved on to MMA, as K-1, in South Africa and internationally, was on a serious slump. The only fights I could get was MMA, so the journey started.”

After Opperman won the EFC welterweight title and later succumbed to its dreaded curse, he was left to regroup and decide what was next. He stayed in the welterweight division for two more fights. However, after losing both contests, it was time for a change. He moved back to middleweight, where he won back-to-back fights and thus secured another shot at EFC gold.

“I am not very emotional about things like that,” he admitted. “It was a great feeling and reward for all my hard work as well as my team around me.”

In his next bout inside the Hex, Opperman meets Liam Cleland for the vacant EFC middleweight title. The fight takes place at EFC 41 on July 11. Recently, Opperman’s teammate, Dricus du Plessis told Combat Press that he was dropping down a division because he was so confident his mentor would become the new middleweight champion.

“It is very easy to say so!” Opperman exclaimed. “This is MMA, I still have to go out there and fight, and anything can happen. That’s why I am not taking this fight easy. Liam is not a walkover. My next fight means everything to me. It is my chance to get to the top again. I am trying my best not to see it like that, but just as another fight — not to make the situation bigger than what it really is.”

It’s Opperman’s first fight of 2015. When the final bell rings, he hopes to be crowned a champion under the EFC banner once again. After sitting on the sidelines now for almost a year, though, the 20-fight veteran will consider his return to the Hex as a victory in itself.

“I just want to get back into the cage and do what I love,” Opperman said. “I am not getting younger, so I want to fight as much as [I] possibly can.”

Michiel would like to thank coaches Morne Visser and Attila Barna, as well as his teammates. He would also like to thank Andre Potgieter from ABE Middas, Winah and Lourence van Niekerk from Q4 Fuel, Renault Northriding and Jade from Jaded Ink. He adds, “Without these people, I would not be able to live the dream.” Follow Opperman on Twitter: @michielopperman
Advertisement