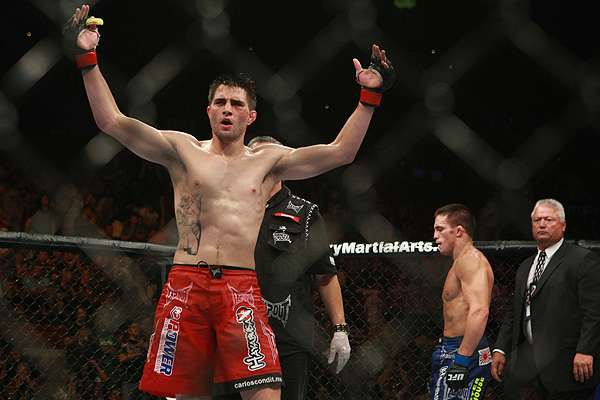 On Saturday, May 30, the UFC hosted UFC Fight Night 67: Condit vs. Alves from the Goiania Arena in Goiania, Goias, Brazil.

In the night’s main event, former UFC interim welterweight champion Carlos Condit returned from a lengthy injury layoff to clash with former title challenger Thiago Alves. The 31-year-old Condit suffered a knee injury against Tyron Woodley at UFC 171 last March and had been out of action ever since. Alves, meanwhile, competed in his native Brazil for the first time under the UFC banner. He looked to build on back-to-back wins over Jordan Mein and Seth Baczynski.

The co-main event featured a long-awaited rematch between featherweights Nik Lentz and Charles Oliveira. The pair met previously in 2011 as lightweights. Originally, the contest was deemed a submission win for Oliveira, but the fight was later changed to a no-contest due to an illegal knee. Lentz had won four of five since dropping to 145 pounds, while Oliveira entered the bout having won three straight.

Former interim champion Carlos Condit returned from injury to batter Brazilian Thiago Alves. Both fighters used their kicking game to find their range in the opening round. Condit threw combinations, but it was the powerful lower kicks of Alves that set the tone. Condit opened up in round two, dropped Alves with an elbow. He followed Alves to the mat and unleashed an onslaught along the cage. Alves survived, but he was bleeding badly from his nose. Condit continued to pour it on with strikes, furthering damaging the nose of Alves. When the round ended, the doctor called a halt to bout, handing Condit the TKO win.

Brazilian Charles Oliveira erased any doubt about the outcome of his first meeting with Nik Lentz, scoring a third-round submission finish via guillotine choke. The pair traded combinations on the feet before Lentz earned a takedown. When Oliveira worked back to his feet, he landed a knee flush to Lentz’s liver and dropped him. He flurried for a finish, but Lentz survived. The second round saw Lentz bounce back and control the fight from the top position. Round three was all Oliveira as he latched onto a guillotine, rolled to mount and coerced the tap from Lentz.

Stepping in on late notice for a second consecutive fight, Brazilian Alex Oliveira used his grappling prowess to submit veteran K.J. Noons. Noons landed early with his right hand, but when the pair’s striking exchanges became sloppy, Oliveira got a hold of Noons. He muscles Noons to the ground and took his back. Once there, Oliveira sunk in a fight-finishing rear-naked choke.

Light heavyweight Francimar Barroso topped Ryan Jimmo on the scorecards after a very lackluster bout. Barroso pinned Jimmo against the cage for a large portion of the opening round to prevent Jimmo from opening up with strikes. In round two, a groin strike from Barroso sent Jimmo to the mat dry heaving for a full five minutes. When the fight continued, Jimmo scored with strikes, but we he couldn’t prevent Barroso from initiating the clinch. When it was all said and done, Barroso left with the decision win.

Brazilian Francisco Trinaldo edged TUF Smashes winner Norman Parke by split decision. Parke scored with his grappling in the opening frame, but absorbed a barrage of leg kicks from the Brazilian Trinaldo. In round two, Trinaldo outstruck the Northern Ireland fighter throughout, frequently ripping the body. Parke controlled the final round once more with his grappling, taking the back of Trinaldo and looking for a submission. It never came and the fell short on the scorecards.

After a sluggish first round, Darren Till relaxed in round two and scored a vicious knockout of Wendell Oliveira. Oliveira controlled the action early by pinning Till against the cage. The second round saw Till open up with his striking before earning a takedown. Once on top, the English fighter delivered a series of big elbows that turned out the lights on the Brazilian.

TUF Brazil winner Rony Jason scored a slick, first-round submission win over Damon Jackson in the final prelim. Jackson closed the distance and took the Brazilian to the mat. Jason worked back to his feet and absorbed an illegal knee. Jackson scored with another takedown, but Jason slapped on a triangle attempt and moved to mount. Jackson fought hard to defend, but eventually was forced to tap.

Brazilian flyweights Jussier Formiga and Wilson Reis battled hard for three rounds, with Formiga claiming the decision win. Formiga used his counterpunching well early in the fight. He took Reis to the ground and took his back briefly. In round two, Formiga dropped Reis with a right hand, but he could not finish. Reis controlled the action for most of the final stanza, but it wasn’t enough as Formiga took the victory.

In a battle of promotional newcomers, Denmark’s Nicolas Dalby eked out a split decision win over Elizeu Zaleski dos Santos. Dalby was patient at range during the first round and mixed in takedowns to keep Zaleski dos Santos from attacking. Round two saw the Brazilian Zaleski dos Santos much more aggressive and he scored with big, looping hooks on the inside and scored with knees in the clinch. The final frame was a chess match as both fighters had their moments, but when it was all said and done, two of the three judges at cageside rewarded Dalby for his efforts.

Featherweight Mirsad Bektic continued his ascension up the 145-pound ranks with a dominant win over Brazil’s Lucas Martins. Bektic quickly scored with a right hand and then a big takedown. He delivered a series of left hands along the fence that bloodied the left eye of Martins. In round two, Bektic connected with a right hand that rocked Martins. Bektic smelled blood and scored the finish by TKO.

Strawweight Juliana Lima used smothering top control to stifle newcomer Ericka Almeida. Almeida was aggressive early, but Lima used her strength to power to the top position and once she was there, she kept Almeida pinned to the mat. It was more of the same in round two as Lima continued to grind from inside the guard. Almeida threw heavy shots in round three, but Lima took her down yet again and cruised to the unanimous decision win.

England’s Tom Breese kept his unbeaten record intact in his UFC debut, stopping Brazilian Luiz Dutra by first-round TKO. The pace was sluggish for most of the round as both fighters jockeyed for position in the clinch. Late in the round, Bresse delivered a left hand that dropped Dutra. He flurried and the referee halted the bout.