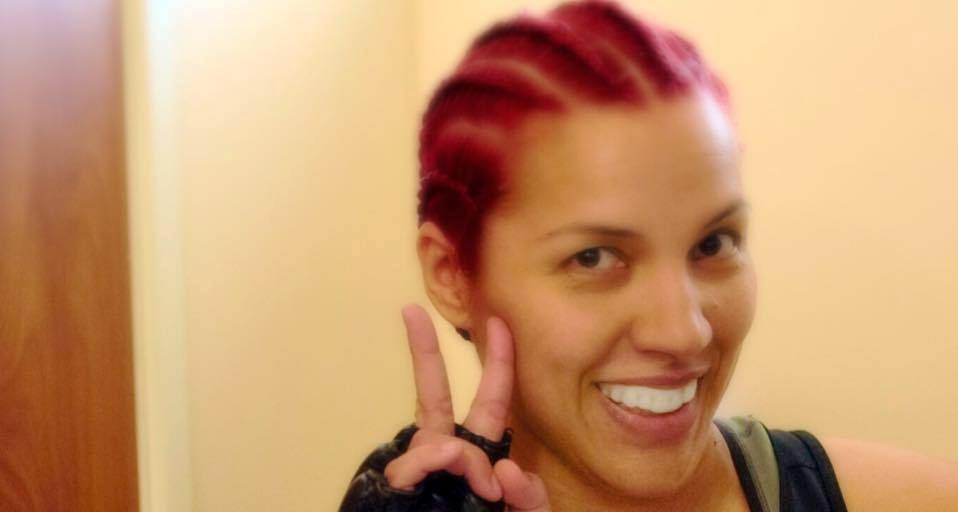 The most well-known Hawaiian goddess is Pele, the goddess of fire and volcanoes. And it wouldn’t be hard to draw a parallel between MMA fighter Adrienna Jenkins, who hails from Hawaii, to Pele. Jenkins made her pro debut in 2004, and it took 18 fights and six years before she ever made it to the second round. She went into 2010 with a pro record of 16-2 and never made it past the first round. Just let that sink in, please.

But Pele, known for her fiery and impetuous nature, doesn’t describe Jenkins outside of the cage. Instead, we must look to Pele’s mother, Papa, the earth goddess. Jenkins, like Papa, has given birth and knows what it takes to be responsible for others, to nurture, to bring life. Many Hawaiians worship Papa as the mother-goddess and the death-goddess, acknowledging that both are opposite sides of the same coin.

Jenkins grew up in Kauai, Hawaii, and started training there while she was in high school at a Relson Gracie satellite school. When she went to college on Oahu, she studied under Relson Gracie. She transferred to Iowa for college and love, but the love for MMA was the only love that stuck. Jenkins trained at the famed Miletich gym and really made a name for herself in the local promotions. After graduating, she moved to Temecula, Calif., and found a home with Team Quest, where she trains with some of the best in the world under UFC legend Dan Henderson.

Jenkins closed out 2010 with three losses. First came a loss to Jan Finney, marking the first and only decision for Jenkins. Then, she lost to Shayna Baszler in June and as a last minute replacement against Tonya Evinger in July.

“The timing was off,” Jenkins told Combat Press. “I knew it, but I also knew what it was like to lose an opponent. I really wasn’t able to train properly, but [I] thought I could rebound.”

After the third loss of the year, Jenkins took some time off. She became pregnant with her second son. While she wasn’t fighting, she was still training.

“I tried to take fights after the fight with Tonya, but, from Oceanside to Temecula, fights just kept falling through,” she said. “I was in shape, training regularly, but women’s fights just seemed to fall through. Even after the pregnancy, it just never worked out.”

Jenkins didn’t get another fight until recently. Really recently. On April 11, she defeated Kelsey Jorgenson in just 27 seconds.

“Kelsey was a last-minute replacement,” explained Jenkins. “Apparently, the girl the promoters had lined up didn’t even know she was fighting. My teammate, Jessica, was supposed to make her pro debut, but couldn’t get an opponent to stick. It sucks.

“But getting back in the ring was great. I feel like I did a good job against Kelsey. It’s part of the job, really, just to fight whoever they put in front of you. It was exciting, and I fight to entertain the crowd. Making weight at 145 [pounds] is easy. It’s a cut, but it’s not drastic like 135.”

And that is a good thing, since Jenkins has her next fight this Friday at Bellator 137. Alexis Dufresne was slated to face Arlene Blencowe, but had to bow out due to being pregnant.

“Dan came to me and said, ‘Alexis is a monster 145er; when she gets back she is going to dominate this division. Do you want to put your name in?’ And I said, ‘Sure, why not?’ So it’s short notice, you just train what you’re good at. You don’t train for an opponent. You train for yourself. Arlene has had longer to train, but she was also training that time for a different opponent. Plus, Team Quest is always training.”

Despite her record, Jenkins trains to go the distance.

“I am training like this is a five-round fight,” Jenkins admitted. “I really think this is going to be a war. I don’t see this one going quickly. I am not really good at social media and promoting myself. But I have actually been a fan of Arlene’s for a couple of years on Facebook. She is also a mother, and no matter whose hand is raised at the end of this fight, I am excited to see where her career takes her.

“And here I am. I get to make my Bellator debut. I have a teammate on the same card and have friends who work for them, and they all tell me what a great organization it is. Stepping in as a replacement is a great opportunity for me. The graphic artist put our fight underneath the main event on the fight poster. I have never felt like this before, and I just can’t wait to show it to my boys when they get older.

“The reality is, as a mother, that now I feel like everything I do I do for them. I am so stoked to be able to do this for them. It’s something to share and show them they can do anything. I want to be remembered as somebody who gave their all.”

The earth mother may be the core of Adrienna Jenkins, but you can bet the goddess of fire is who will step onto the Bellator mat.

Adrienna would like to thank her family and friends and fans: “Thank you to my better half, Jeremy, for helping with keeping the kids in one piece during this camp. My boys have been so patient with me. My manager, Ryan, for helping me to make work still possible. Thanks to my clients and members for being so patient with this short-notice camp. Dan, for getting me this fight and for the confidence in me.” She would also like to thank her sponsors: Clinch Gear, for supporting Team Quest; Team Quest and Dan Henderson’s Athletic Fitness Center; Perfect Tan for the support of the team; NutriShop Murrieta for “keeping the engine fine-tuned”; National Fire; Faustos Bail Bonds; and Fine Line Graphics.
Advertisement