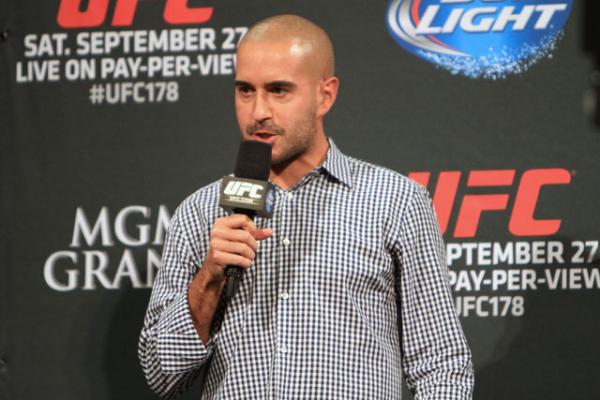 A lot of people were thrown for a loop with the sudden announcement of longtime UFC play-by-play man Mike Goldberg getting the boot, seemingly without much of an explanation, let alone a proper goodbye for someone who had been with the company since its rise into the mainstream two decades ago.

Goldberg was the perfect company man, too. He devoted his life to the broadcasting side of the sport and did his best to be the voice of the UFC whenever the company needed him. Since his debut at UFC Ultimate Japan (UFC 15.5) on Dec. 21, 1997, Goldberg had done almost every single event up until his tenure with the company ended at UFC 207 on Dec. 30, 2016. That’s not quite hitting the 20-year mark, but over those nearly two decades, Goldberg became known as the treasured voice of the organization.

With Goldberg’s exit recently finalized, a new era has begun for the UFC, where the main play-by-play commentators are not going to be following the “hype master” style that was being delivered by Goldberg. This means Jon Anik, who’s been a secondary commentator behind Goldberg, will be moving into the primary role, presumably doing pay-per-views with lead color commentator Joe Rogan, while the newest member, Todd Grisham, will take Anik’s spot alongside Brian Stann, whose star in the company has been on a meteoric rise. Both gentlemen have also become employees of Fox Sports, where Anik already hosts some UFC-related programs and Grisham is expected to get the same luxury.

Noticeably, this was not a quality afforded to Goldberg, who was primarily a UFC employee and not a Fox employee.

In a feature two months ago that detailed rumors about the exit of Goldberg and possibly Rogan, we also delved into reports about how the new UFC owners are looking to stop the company from handling production for events so they can hand it over to the network that broadcasts the shows. Currently, that network is Fox Sports. This could change once the UFC’s contract with Fox Sports ends in August 2018. Either way, it looks like the UFC doesn’t want to handle the TV side as much anymore, seemingly handing it over to the entertainment professionals who like to use snazzy graphics and voice-overs. Which network the UFC will be on 18 months from now, and how the production process will go, is a side issue at the moment, though.

The more relevant discussion is how the addition of Grisham as the secondary commentator and Anik sliding into Goldberg’s seat will impact the UFC brand. Will it be better? Will it stay the same? Will it get worse?

The future of the UFC’s broadcast team is looking more promising than could have been expected. Change is always a good thing to observe, first, before making any judgement.

The first event that didn’t feature Goldberg, and had Anik with Rogan, was UFC 208 in Brooklyn, N.Y. UFC light heavyweight champion Daniel Cormier joined the booth as well, and for the first time in years, the whole UFC broadcast on Fight Pass, Fox Sports 1 and pay-per-view featured a three-man booth calling the action.

The initial critique of the Anik/Rogan/Cormier tandem appeared to be mixed. It seemed like it was hard for Anik, as the play-by-play commentator, to say much, because Rogan and Cormier were taking up space giving their analysis. That can be difficult to manage for an entire six- or seven-hour event. From a viewer’s perspective, though, it was mostly normal. It was definitely a surprise, but it was also a good experiment to try out to see how it would go.

Would I want to do it, again? If it was up to me, probably not. However, I also wouldn’t be vehemently against it. Change is good, but it will take some time to adjust to something new. The UFC and Fox Sports can probably give the three-man booth one more shot and then listen to constructive feedback. Then, the powers that be can decide what to do for the next pay-per-view. If they do decide to go back to the two-man booth, there probably won’t be many complaints. I heard Anik and Rogan work together at UFC 155, when Anik had to fill in for Goldberg, and they did really well together. Why not try it again?

It’ll be very interesting to see how Grisham does in his debut as he adjusts to this whole new platform, especially for this lifetime WWE fan. He got a little bit of on-the-job training as a play-by-play commentator for GLORY Kickboxing, so he had some time to fine-tune his skills before he stepped into the UFC’s booth.

Grisham got his shot at UFC Fight Night 105, and he did not disappoint. He had great chemistry with Stann, who’s extremely knowledgeable and a really good guy to work with. Grisham might not be as fluid in rolling with the punches (get it?) as Anik and Goldberg have been, but for someone doing his very first event for the biggest promotion in the world, he gets a solid B+ grade. It’ll be exciting to see what he has to offer in future events, which will most likely remain relegated to events on Fox Sports 1.

All in all, the addition of Grisham is a good one. Anik has proven himself, and so has the tandem of John Gooden and Dan Hardy, who handle UFC’s international shows on UFC Fight Pass. If the UFC and Fox Sports can keep things this way, and maybe mix up the commentators sometimes, while throwing in some three-man booths, the future of the UFC’s broadcasting is only going to improve.