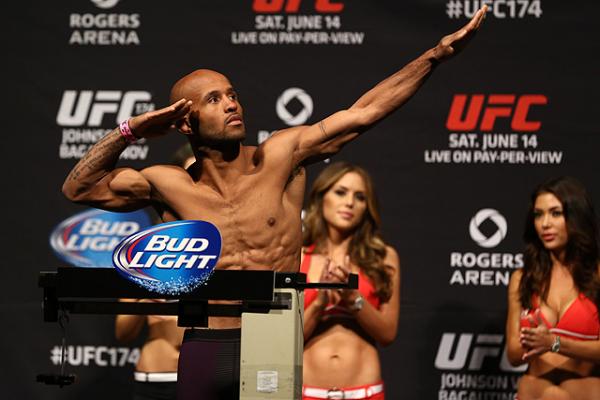 On Friday, April 24, the UFC will host the weigh-ins for UFC 186: Johnson vs. Horiguchi which takes place Saturday, April 25, from the Bell Centre in Montreal, Quebec, Canada.

In the night’s main event, the promotion’s flyweight kingpin, Demetrious Johnson, will put his 125-pound on the line against Japanese challenger Kyoji Horiguchi. Johnson will aim to make the sixth defense of his title. He was most recently in action in September, submitting Chris Cariaso via kimura at UFC 178. The 24-year-old Horiguchi will enter the title affair riding a nine-fight winning streak that includes four straight inside the Octagon.

The co-main event of the evening features former light heavyweight champion Quinton “Rampage” Jackson against Brazilian Fabio Maldonado. Rampage was pulled from the card after a court injunction from former employer Bellator MMA, but a last-minute appeal opened the door for his return. The 36-year-old has won three straight outside the Octagon. Maldonado, meanwhile, has won four of his last five fights.

Also on the main card, a pair of The Ultimate Fighter alums as middleweights Michael Bisping and C.B. Dollaway lock horns. England’s Bisping has alternated wins and losses for the past three years and will be looking to bounce back from a submission loss to Luke Rockhold in November. Dollaway saw his climb up the 185-pound ladder come to a halt in December when he was stopped by Lyoto Machida in just 62 seconds.