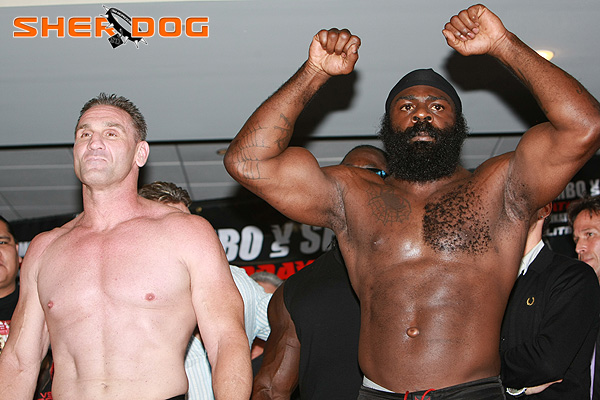 Kimbo Slice, Ken Shamrock and Bellator MMA: A Match Made in MMA Heaven

On June 20, inside the Scottrade Center in St. Louis, every fight fan around the world will finally receive the bout they have been waiting for since 2009: Kimbo Slice vs. Ken Shamrock. Okay, so maybe every fight fan hasn’t been waiting for this fight to happen since it was canceled the day of the event six years ago. In fact, there might not be a single fan who has been waiting for Slice and Shamrock to lace up and enter the cage. However, despite a roster of significantly more talented fighters, Slice vs. Shamrock is one of the best bouts Bellator could ever hope to make.

When Shamrock and Slice enter into the Bellator cage, they will be 51 and 41 years of age, respectively. Neither of them will have competed in a sanctioned MMA bout in close to five years, and each suffered a loss in their most recent bout in 2010. Despite all of these factors, they remain infinitely more well known than the men they lost to — Mike Bourke for Shamrock, and Matt Mitrione for Slice. Herein lies the reason for this match being made in the first place. With the success of the Tito Ortiz vs. Stephan Bonnar-headlined Bellator 131, Bellator is banking on the fact that even if it might turn out to be a terrible fight, fans are still going to tune in.

Ortiz vs. Bonnar peaked at over two million viewers when it aired on Nov. 15, 2014, easily setting a record for a Bellator MMA broadcast and also becoming the highest-rated non-pay-per-view MMA event of 2014. While Bellator does not boast the deep roster of talent as the UFC, it certainly has its share of talented fighters. However, none draw anywhere near those types of numbers. It should also be noted that Bellator 131 occurred the same night as UFC 180, making the numbers even more impressive and further proving that, in the sport of MMA, name recognition comes before talent.

Make no mistake, despite being one of the best fights Bellator could make in terms of drawing viewers, the actual bout will be at least as terrible as the sloppy snoozer between Ortiz and Bonnar. Shamrock has been on the downside of his career for at least the past decade, and he has won only two fights over that time period. Kimbo burst onto the scene after a successful “career” as a backyard-brawling YouTube sensation, but quickly proved overmatched against athletes with any level of professional training. This bout with Shamrock will have more in common with the backyard brawls that created Slice than it will with high-level MMA.

Despite his lack of recent success, Shamrock remains an MMA icon who will no doubt draw viewers in his own right, but coupled by the MMA return of internet sensation Kimbo Slice, Bellator MMA will have a combination that will undoubtedly draw in the casual fans of yesteryear. There is no other game in town except viewership. Everything else in the sport flows from the river of viewership, and while you do not want to make every fight on your card the sideshow that is Slice vs. Shamrock, everyone loves a good car crash whether they like to admit it or not.

When the dust settles on the main event, we will not have the next title contender, nor will we be witness to the rise of the next great MMA star. But somewhere down the card, you just might get either (or both) of those. Fights like Shamrock vs. Slice are a necessary evil in the world of MMA. Sideshow fights bring in the casual viewer, and the promotion hopes to turn those viewers into hardcore fans of the sport by exposing them to the athletes on the undercard. Fights such as this generate exposure for all those involved in ways they would not be able to on their own (See: Petruzelli, Seth). So, whether we like to admit it or not, Shamrock finally locking horns with Kimbo Slice after a six-year delay is the best thing to happen to Bellator MMA since Ortiz put us all to sleep in his fight against Bonnar.