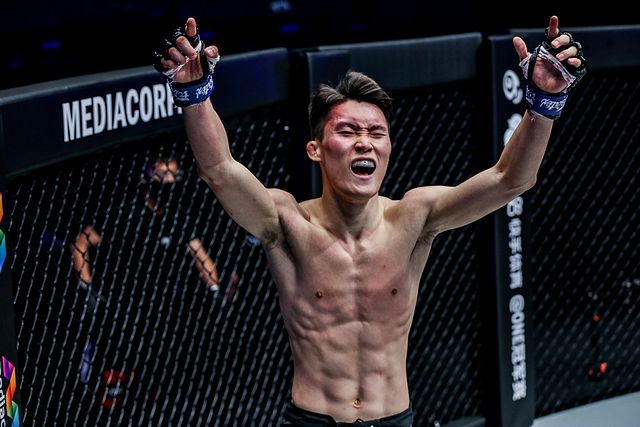 Kwon Won Il Discusses His Upcoming Fight at ONE 158

Kwon Won Il will look to defend his number-two spot in ONE Championship’s bantamweight rankings and take a step closer to a shot at John Lineker’s bantamweight title at ONE 158: Tawanchai vs. Larsen on Friday, Jun. 3, at the Singapore Indoor Stadium.

The South Korean will step into the ONE Circle against fourth-ranked Fabricio Andrade, who has made it clear that he plans to usurp Kwon’s position and continue his rapid ascent up the divisional ranks when the pair meet. Kwon has been paying attention to everything the mouthy Brazilian has been saying about him, and his comments are one of the main reasons he is excited to face “Wonder Boy” in the co-main event showdown.

“I totally feel for him,” Kwon said. “He really talks too much. I really hope he keeps more to himself and talks less. I think a lot of fans and critics are looking forward to this match because we are both strong strikers.

“I got to admit he is a tricky opponent – for sure. And he had challenged and tagged me via Instagram, and I tried to leave a comment on his post, but he had disabled the commenting function. So I’m kind of speechless and don’t really understand what he’s trying to do. So I just guess we have to see how things will flow.”

Pretty Boy has reeled off three consecutive knockouts inside the ONE Circle, with his last finish against former divisional king Kevin Belingon helping to cement him as one of the premier contenders at bantamweight.

Likewise, Wonder Boy has looked outstanding. The Brazilian stormed the rankings with back-to-back knockout wins, and he is 4-0 on ONE’s global stage.

Kwon recognizes his upcoming opponent’s talents. And while he believes he will leave the Circle with another victory, he expects the bout to be challenging.

“I admit, he’s a good striker, but I’m not really interested in his style or techniques because I strongly believe that I will be the winner of this match,” he said. “But, at the end of the day, I guess it’s going to be an exciting one since we’re both going to aim for a knockout. So, I think it will be a fun match because I always prepare to [go for] a [knockout] regardless of being the main highlight or not. I do think this match will be the most exciting one out of the whole line up.”

One of the reasons for Pretty Boy’s confidence lies in his striking defense. The South Korean’s ability to evade damage and roll with the punches has allowed him to get where he is in the division today, and it will be an important factor on Friday night when he looks to engage with Andrade. Kwon has put future plans out of his head as he prepares for his upcoming bout. He wants to score an emphatic finish on Andrade. After he does that, he’ll look toward his ultimate goal.

“Nothing else matters,” Kwon said. “I just want to lay a punch on his mouth so that he can stop talking. By landing a knockout, I think I can expect not just the usual bonus, but a triple bonus. That’s what I think. In this match, I will win no matter what. And if I were to win this match, the next title shot will be mine and no one else’s.”