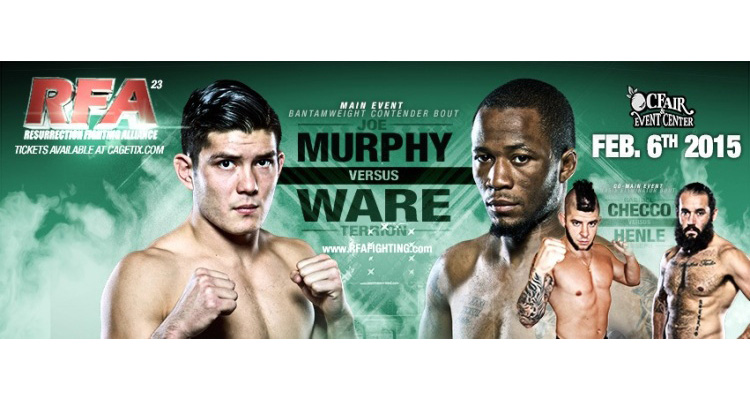 On Friday, Feb. 6, Resurrection Fighting Alliance once again visited the The Hangar at the OC Fair and Event Center in Costa Mesa, Calif. The night’s main card aired live on AXS TV.

In the night’s main event, California bantamweights Joe Murphy and Terrion Ware locked horns. Murphy looked to build on the momentum of his first-round TKO win over Bruno Frazatto at RFA 21 in December. Five of his eight career wins had come via submission. Ware, meanwhile, had won seven of his last eight, including a submission win over Zac Chavez at RFA 12. Eight of his 12 career wins had come before the final bell.

The co-main event of the evening featured former RFA middleweight title challenger Gabriel Checco against The Ultimate Fighter 11 alum Joseph Henle. The Brazilian Checco suffered the first loss of his career in October against current UFC combatant Jake Collier. California’s Henle had battled injuries for nearly two years, but was looking to quickly establish himself in the 185-pound title picture.

Terrion Ware earned the next shot at the bantamweight title with an impressive unanimous decision victory over Joe Murphy. Ware used counters to edge Murphy on the feet through the first two rounds. Murphy, who is better known for his grappling, scored one big takedown in the second round but was otherwise mostly content to stand and trade with Ware. Murphy turned it up in the third stanza and put together a rally, but Ware’s chin was able to withstand a number of cleanly landed punches. Ware took the first two rounds on all three judges’ scorecards for the unanimous nod.

Gabriel Checco needed just 74 seconds to finish fellow middleweight contender Joseph Henle. Checco came out aggressive, but Henle tied him up and slowed the pace. They broke apart and exchanged more strikes. Checco landed a left hand to Henle’s temple that sent Henle staggering backward to the cage. Henle dropped to the mat as Checco surged forward and rained down punches. The referee stepped in to save Henle, giving Checco the TKO victory.

Raoni Barcelos is a highly decorated jiu-jitsu practitioner, but don’t underestimate his hands. The featherweight consistently landed with punches against opponent Jamal Parks before connecting on a blow that dropped Parks to the canvas. Barcelos pounced and finished off Parks for the first-round knockout victory.

Fighting on 10 days’ notice, Dominic Waters grinded his way to a unanimous decision victory over Mikey Gomez in welterweight action. Gomez and Waters shot out of the gates in a stand-up brawl, but Gomez made a costly mistake during a takedown attempt and ended up underneath Waters. Waters took control, working a conservative ground-and-pound attack for much of the remainder of the fight and prompting numerous stand-ups from the referee. With his control of Gomez on the mat, Waters sealed up the judges’ nod.

In a hard-fought battle, strawweight Jocelyn Jones-Lybarger battered and bloodied Maria Rios en route to a unanimous decision victory. Jones-Lybarger landed several flurries on Rios in the opening stanza, but she was taken down in the second half of the round. She fended Rios off after Rios gained mount and then took Jones-Lybarger’s back. Jones-Lybarger continued her striking assault in rounds two and three, causing swelling around the right eye of Rios. Rios connected with some of her best punches in round three, but it wasn’t enough to sway the fight in her favor. All three judges award Jones-Lybarger with every round on the scorecards for a 30-27 sweep.

Adam Antolin was simply too much for jiu-jitsu world champion Ron Henderson. Antolin bested Henderson in all aspects of their flyweight battle, from striking to grappling. The finish came in the third frame when Antolin took Henderson’s back and locked up the rear-naked choke. Henderson was on the verge of tapping before he was rendered unconscious by Antolin.

Sometimes a good first round is a bad thing. After dominating the opening stanza with three successful takedowns and near complete control on the mat, Blake Troop faded in rounds two and three of his middleweight battle with Mike Jasper. Jasper, who came up from welterweight on short notice, punished Troop with ground-and-pound flurries in the final two frames until referee Herb Dean stepped in to wave off the fight. Jasper picked up his ninth career win with the third-round TKO stoppage.