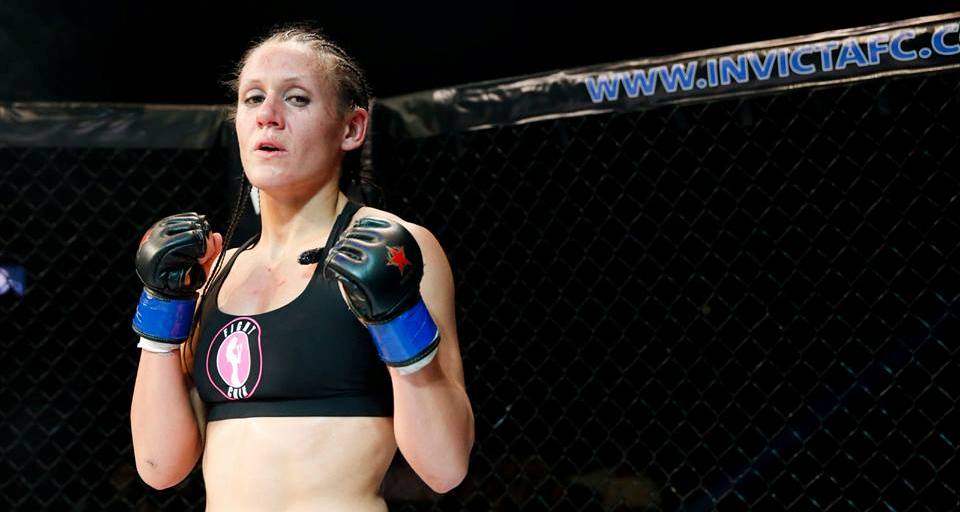 It requires a level of focus and dedication beyond the limits of most athletes. With two combatants locked inside a cage aiming to separate each other from consciousness or twist each other’s limbs apart, the life of a fighter isn’t for the lighthearted.

And then there’s DeAnna Bennett.

“You know, I’m a little bit off,” declared the 30-year-old Utah fighter. “I’m okay with it. People are going to know it eventually if I keep fighting.

“I always tell people I want to hug them and it creeps them out apparently. Free hugs, all day, every day.

“But if I’m cutting weight and you want to keep all of your fingers, you should probably step back. I’ve got a snaggletooth and that thing is sharp. It’s a risk you take.”

If you manage to survive around Bennett long enough — with all of your digits — you’ll discover a level of honesty and directness unmatched by anyone in the sport. Although she’s already admitted a number of truths in the past, there are still more details to be unearthed.

“I’m like an iceberg,” she proclaimed. “You’re only seeing so much and there’s a lot more beneath the surface. I don’t think the world’s ready for it. No one can handle that. Brains would explode. Or people would run for their lives.”

Bennett’s demeanor is a stark contrast to most in the sport, but her journey to the cage is not. After her high school water polo coach convinced her to try wrestling, it wasn’t long before she was hooked on competition.

“If I hadn’t wrestled, I wouldn’t have made it into MMA,” explained the Pit Elevated product. “I wrestled for a few years during high school and absolutely loved it.

“[Later] I took a kickboxing class, liked it and figured I could do that for exercise — so I could not be a fat kid. I joined a gym, found jiu-jitsu and it reminded me of wrestling. It tied everything together.”

Now six fights into her professional career, Bennett has yet to taste defeat. With two straight wins under the Invicta banner, she was being mentioned as a potential threat to flyweight champion Barb Honchak.

“Honestly, that’s just crazy talk to me,” said Bennett. “The thought that things are going so great, I have to attribute that to my coaches. Jason Mertlich is amazing. I would never be where I’m at without his guidance and help in practice everyday and during fights. Without him, I wouldn’t have been as successful as I have been.

“I just love the sport. It’s my happy place to go to the gym and train and work hard for it. To do something I love, it’s just amazing.”

Although the gym might be Bennett’s sanctuary from day-to-day life, being locked inside a cage is another story. As she stood across the cage from Michelle Ould at Invicta FC 8 in September, she was forced to fight nerves, as well as her opponent.

“The fact that it was going to be streamed online [via UFC Fight Pass] for people to watch was frightening,” admitted Bennett with a laugh. “But I’m kind of a stress case. I play through every angle in my head of what can happen. If you’re not nervous going into it, you’re probably a crazy person. It keeps you on edge and motivated to go out there.”

Bennett earned her fourth career finish that night against Ould and set up a clash with Brazil’s Jennifer Maia at Invicta FC 10 in December. After three grueling rounds with Maia, she walked away with a decision win. However, immediately following the bout, her attention turned elsewhere: the strawweight division.

“In my last fight camp, I found myself walking around at 130 pounds, which was five pounds less than what I would normally cut from to make 125,” explained the fighter. “I thought if I’m walking around that low, that’s a small 125er. I could make 115. I want to be in the weight class where I’ll be the most competitive.

“I never thought it was a possibility for me… until now. Take that, fat DeAnna.”

Unfortunately for Bennett (and her teammates), dropping an additional 10 pounds meant more days of being hungry… and angry… or, as Bennett has dubbed it, “hangry.”

“Oh, man. It’s bad,” she joked. “I have a teammate that always slaps me on the shoulder, and I yelled, ‘Don’t touch me!’ and started screaming at him. Then I realized it was exaggeration and I probably shouldn’t have done that. I find myself getting a little snappy. I’m about to start biting people if they touch me.

If Bennett (and her team) survives the weight cut, she’ll make her 115-pound debut at Invicta FC 11 in Los Angeles on Feb. 27 against Norma Rueda Center. With a tough match-up in front of her, don’t expect “The Argentine Assassin” to say anything negative about her opponent. After all, that’s how she ended up with her nickname in the first place.

In her second pro bout, she squared off with eventual The Ultimate Fighter winner Julianna Pena — also known as “The Venezuelan Vixen” — and Bennett jokingly told the promoter about her mother’s Argentine roots.

“It’s a cautionary tale,” she stated with a laugh. “It’s terrible, but it’s never going away.”

It could be much, much worse. Bennett could be stuck with a moniker like “Free Hugs” or, even more deplorable, the product of an online nickname generator. Yet, her nickname serves as a warning to anyone trying to nonchalantly talk trash to an opponent.

“I’m physically not capable of trash talking,” Bennett acknowledged. “I get into that and I start giggling. No one would ever take me seriously, let alone myself. I’ve tried to trash talk my teammates and it ends badly for me. You’re not going to see that from me anytime soon.”

Instead of intimidating her foes with her words, Bennett is happy to let her in-cage performances do the talking. Or, she’ll settle for making them slightly uncomfortable.

“I’d love to be know as an entertaining fighter,” said a suddenly serious Bennett. “But if you take two seconds to talk to me and realize that I’m just a giant weirdo that wants to hug everybody, it kind of outweighs that.

“Awkward and weird… I’m pretty sure those are the two top descriptors that anyone who knows me uses. My teammates and closest friends would say that sounds about right.”

No matter what words you use to describe DeAnna Bennett, it doesn’t change what she’s capable of in the cage. And in a sport filled with an aura of seriousness, her quirks are welcomed. Let’s just hope the world gets to see the rest of the iceberg.

DeAnna would like to thank her coach, Jason, her team, and all of the staff at Pit Elevated, including gym owner Will Farrar, her chiropractor, Dr. Russell, her strength and conditioning coach, Austin Carter, Quest Training, Warrior Fuel and her boyfriend, Trevor Mellen. Follow her on Twitter: @DeAnnaDBennett