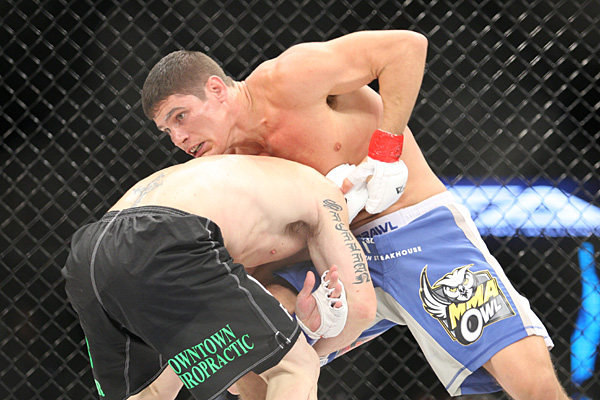 TD Garden, or “The Garden” as it is more commonly known, has been a stalwart for Boston sports since it was constructed in the mid-90s. The Celtics and Bruins both call the arena home. As a youngster, Charles Rosa, like thousands of other passionate Bostonians, would file into that very arena to watch those teams play.

On Sunday, Jan. 18, Rosa is swapping his hot dog, soda and seat in the stands for a position on the main stage. At home, where a sporting dream was born, and after years upon years of hard work, it is all finally coming together.

There is no doubt that Boston is a proud sporting town. As fate would have it, on the same Sunday that Rosa embarks on his second foray into the Octagon, the New England Patriots are set to take the field at Gillette Stadium with an opportunity to secure a spot in the Super Bowl.

And as Bostonians rally, as they tend to do, to cheer on their hometown favorites and visiting superstars inside the TD Garden, Rosa prepares himself for what is set to be a make-or-break opportunity. This weekend, at 100 Legends Way, the stakes are higher than ever for “The Boston Strangler.”

“This is my Super Bowl,” Rosa exclaimed to Combat Press. “Every fight is the biggest fight of your career, but this is absolutely, without a doubt, the biggest fight of my career. When I was growing up, I dreamed of someday playing sports at the Garden. Now I have the opportunity and I can’t wait — I wish it was fight day today. I’m ready to make a statement in Boston.

“[Winning] means the world to me. There’s not much that would mean more to me at this point. Yes, I got the bonus for my last fight, but I lost. I’d trade the bonus for the win any day of the week. I’m going for both again in Boston. I’m not leaving Boston without the win and bonus [laughs].”

Of course, getting to the Garden and fighting inside the famed Octagon on Jan. 18 never could have been an opportunity for the 28-year-old if he had not stepped up on just seven days’ notice to make his UFC debut on Oct. 4, 2014. In Stockholm, Rosa’s career entered a whole new phase.

“Making my UFC debut was a dream come true,” Rosa recalled. “There’s no better way to describe it. I worked six years to make it to that point and it felt amazing. Obviously, I was hoping for a different result, but the experience was amazing and I wouldn’t trade it for the world. That said, I can’t wait to get back out there [laughs].”

Rosa’s UFC debut, which came just two years after he made his professional debut, could be best described as a whirlwind of events. Entering the bout, Rosa had an impressive undefeated record and nine wins in a row to his name, with all but one bout ending in the first round. The American Top Team fighter had an opportunity like no other in front of him. The UFC was calling, and he had to answer.

“It’s impossible to describe,” Rosa admitted. “I was basically just landing in Holland when my agent, Charles McCarthy, called. It was odd enough to land in an unfamiliar country, all alone. It was surreal when I got the call. I worked for six years to get that call. In a way, I couldn’t believe it. But, of course, there wasn’t any hesitation at all to accept and, from there, begin cutting weight [laughs]. It all happened very, very fast.”

Typically when a fighter gets their first shot at glory in the UFC, it’s something that they are eased into, especially when they have no big-show experience behind them. However, Rosa had to dive right into the deep end. He stood opposite a seven-year UFC veteran who had entered the Octagon 17 times before. It wasn’t going to be an easy night by any means, and Rosa ultimately found himself on the end of his first professional loss.

“It was tough, you know? But, Dennis Siver is an incredible fighter with a lot of experience in competing at a very, very high level. You expect to win every fight — at least, I expect to win every fight — but the reality is, someone has to lose and that night it was me,” Rosa said. “It’s unfortunate, but I fell short that night. I did everything I could to win, but I fell short. It hurts, but I’ve dealt with losses before. Now, I can’t wait to get back out there and get another win streak going.

“I learned that I belong in the UFC. I thought I knew that before, but fighting Dennis under the lights in the Octagon, all the way over in Sweden, I learned that I definitely have what it takes to compete at the highest level of the sport. There were other things I learned, more technical things, but that’s what stands out for me. I can’t wait to prove again that I belong there.”

Before his career as a fighter started to take off, Rosa eyed a life as a chef. To supplement his fighting career, he works at a steakhouse called Cut 432 in Delray Beach, Fla. When the day comes to hang up the gloves, he has the necessary skills to follow a life in the foodservice industry. However, mixed martial arts certainly gave him a new dream to live out. He has been chasing that dream ever since he made his amateur debut in 2010.

“Being involved with MMA gave my life a direction that I didn’t have before,” Rosa admitted. “Yes, I graduated from Johnson & Wales University and enjoyed working in foodservice before I began fighting. But MMA gave me a goal to be the best fighter that I can be. It’s totally changed my life. I’m sure I’d be doing well without it, but I couldn’t be happier having MMA in my life. This sport means the world to me, and I’m doing everything I can to be the best that I can be, every session, every day.”

It’s a common sight to see a fighter with a plethora of sponsors, fight trunks reminiscent of a bill-plastered New York subway. With the direction the UFC is headed with regards to in-cage sponsorship, though, this will become a thing of the past. For some companies, like Rosa sponsor Chucky’s Fight, much-needed exposure will be hard to come by. Although in future bouts it’s unlikely that Chucky’s Fight will be joining Rosa in the Octagon, he will always have a place in his heart for a company that means so much to him.

“Chucky’s Fight is a non-profit organization that is run by my family,” Rosa explained. “The goal is to prevent and spread awareness of teen substance abuse, and they do amazing work. The great work that the organization does means the world to me, and I’m very proud to be a part of it and do my best to help out how and when I can. Chucky’s Fight will be on my trunks on Fight Night — it always has been — and representing the organization in the Octagon means the world to me.”

In his hometown bout, Rosa squares off with Blackzilians fighter Sean Soriano. The rivalry between the Blackzilians and Rosa’s own camp of American Top Team is very well known. In fact, it is also set to be the driving force behind the next edition of the UFC’s The Ultimate Fighter reality television series. Soriano and Rosa head into the fight on the back of their respective losses, and both will be eager to set the stage in the first bout of the Fox Sports prelims.

“Fighting in Boston, in front of all my family, friends and fans, for the UFC, no less, makes this the biggest fight of my career. But, honestly, yes, it does mean more,” Rosa confessed with a laugh. “I run by the Blackzilians gym almost every day. I go out of my way to run longer and further almost every day so I can run past it. It motivates me when I see it. I didn’t think I could want to win this fight any more than I already did, but, yes, it makes me want to win even more [laughs].”