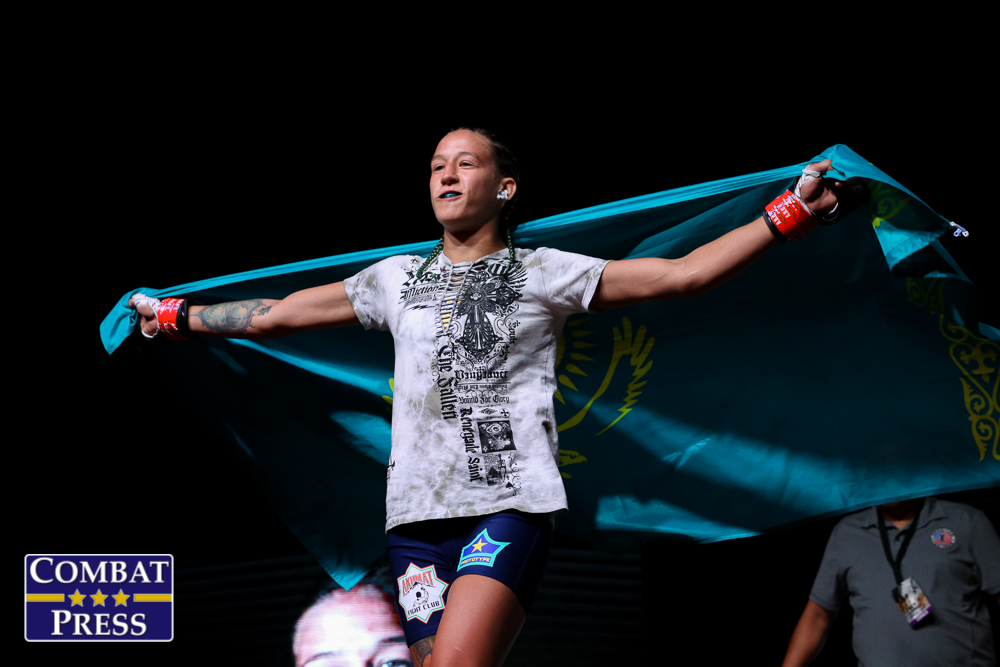 The Winner’s Circle: UFC on ESPN 10

For the third week in a row, an action-packed night of fights went down at the UFC Apex in Las Vegas. With UFC on ESPN 10 now in the books, let’s recap the best performances of the night and see which of the victorious fighters earned themselves a spot in the Winner’s Circle. We’ll begin with the honorable mentions before moving to the winner’s podium.

In the main event of the evening, Cynthia Calvillo moved up to the flyweight division and cruised to a unanimous-decision victory over No. 1 contender Jessica Eye. Calvillo landed four takedowns en route to her sixth UFC victory. The former Team Alpha Male product relied on her strong grappling ability to secure the victory in her 125-pound debut. Now at 7-1-1 in the organization, Calvillo looks primed to make a run at the title, but it’s hard to imagine her giving any problems to current champion Valentina Shevchenko. Nonetheless, fresh faces are always a welcome sight in the division.

As the heaviest favorite (-900) of the night, a big finish could have put Merab Dvalishvili on the fast track to relevancy in the stacked bantamweight division. He wasn’t able to secure the finish on Gustavo Lopez, but he turned in a dominant performance, nevertheless. Now riding a four-fight winning streak, “The Machine” has earned a reputation as one of the division’s most relentless grapplers. After the fight, Dvalishvili called out one of the UFC’s hottest commodities, Sean O’Malley. That’s certainly an intriguing stylistic match-up, but the UFC will likely prefer to throw O’Malley a more favorable match-up as it continues to build him up for stardom.

In the women’s bantamweight division, Julia Avila came out guns blazing and finished Gina Mazany in just 22 seconds — the fastest finish of the night.

Welterweight Christian Aguilera started the show with a bang, finishing fellow newcomer Anthony Ivy with an effortless barrage of heavy strikes. Aguilera looks like a guy who is always down to brawl. The fight lasted just 59 seconds. In fact, each of the night’s first three bouts were wrapped up in less than a minute.

Andre Fili, perhaps the biggest name on the card, picked up the split-decision victory over Charles Jourdain. Fili deserved to get the nod, but he’s quickly entering “gatekeeper” territory. Now 9-6 in the UFC, the 29-year-old has certainly been trending upward for the last couple of years, but he needs to put together some more convincing victories if he’s going to make a dent in the UFC’s extremely deep featherweight division. Despite the loss, Jourdain put in a solid performance against a battle-tested veteran and continued to ride the wave of his December knockout over Doo-ho Choi.

Just a month after he was thoroughly outclassed on the mat by Bryce Mitchell, Charles Rosa changed up the game plan to eke out a narrow split decision over Kevin Aguilar. Rosa lost the first round, but he put together some solid combinations in the later rounds to sway the judges.

Although Calvillo headlined the show, the more impressive performance came from her fellow flyweight Mariya Agapova, who was making her organizational debut. The 23-year-old, a boxing champion in her native Kazakhstan, looks like she could be a future challenger to Shevchenko’s throne. Agapova capped off a wicked striking display with a head kick to knock down Hannah Cifers and then locked in a rear-naked choke to secure the first-round finish.

Tyson Nam’s road to the UFC has been long and harrowing, but he’s now making up for lost time. The 36-year-old made a quick statement by picking up his first UFC victory with a vicious one-punch knockout of Zarrukh Adashev. Upon signing with the UFC in late 2019, Nam was thrown to the wolves. He faced Sergio Pettis and Kai Kara-France in his first two fights with the company. Despite the fact that Nam lost both of those bouts by unanimous decision, it was clear that he belonged. Nam drove home that point on Saturday night when he picked up one of the night’s four performance bonuses.

It took the combat veteran just 32 seconds to seal the deal, and we should expect to see him back in the Octagon sooner rather than later. Although Nam competed as a 135-pounder on Saturday, a return to 125 pounds is probably in his sights.

Marvin Vettori turned in a performance of the highest quality at UFC on ESPN 10, where he needed less than one round to dismantle Karl Roberson. Vettori’s submission of Roberson marked the Italian’s first finish in the UFC. Now 5-2-1 with the company, Vettori is slowly but surely carving out a spot for himself in the middleweight division’s top 15. Judging by his dialogue with UFC President Dana White after the fight, a ranked opponent is in the forecast for the man known as “The Italian Dream.”

Vettori’s last defeat was a tight split decision delivered by none other than the current middleweight champion Israel Adesanya. Has Adesanya made some huge improvements to his game since that fateful night in 2018? Without a doubt. Has Vettori improved just as much? Absolutely. Only 26, Vettori is a man on a mission, clawing himself into the division’s upper echelon and perhaps a shot at vengeance.