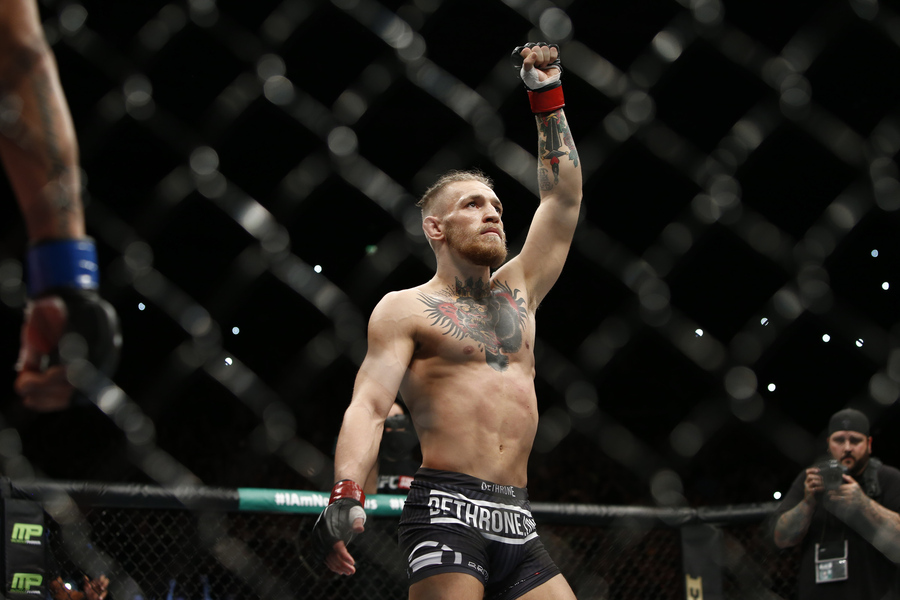 On Sunday, Jan. 18, the UFC hosted UFC Fight Night 59: McGregor vs. Siver from the TD Garden in Boston.

In the night’s main event, Irish featherweight Conor McGregor looked to lock up a 145-pound title shot when he squared off with German-Russian fighter Dennis Siver. The 26-year-old had taken the promotion by storm, reeling off four straight wins, including three by first-round stoppage. Fourteen of his 16 career wins had come via strikes. The veteran Siver aimed to play spoiler and build off his UFC Fight Night 53 win over Charles Rosa in October.

The co-main event featured former lightweight champion, Benson Henderson, who hoped to rebound from just the fourth loss of his career in July to current No. 1 contender Rafael dos Anjos. Facing off with Henderson was a familiar face, as Donald “Cowboy” Cerrone stepped in on just two weeks’ notice to face Henderson for a third time. Henderson edged Cerrone for the WEC title at both WEC 42 and WEC 48. Cerrone bested the previously unbeaten Myles Jury at UFC 182 on Jan. 3.

Conor McGregor was the sole focus of attention as UFC Fight Night 59 approached, and his performance against Dennis Siver demonstrated why that was the case. McGregor delivered a one-sided beating to earn a future shot at the featherweight championship. After the pair trades kicks and punches early in the contest, McGregor started finding a home for his left hand. He picked Siver apart for the remainder of the round while also stuffing Siver’s takedown attempts. The Irishman continued his dominant display in the second frame, where his barrage of strikes overwhelmed Siver and eventually led to a knockdown. McGregor pounced and rained down elbows and punches to force the TKO stoppage. In usual McGregor fashion, the outspoken Irishman left the cage following his victory and confronted featherweight champion Jose Aldo.

Donald Cerrone said Benson Henderson no longer had his number. Though the decision victory was not without controversy, Cerrone backed up those words with a 29-28 nod on all three judges’ scorecards. Cerrone got off to a slow start, while Henderson threw a high volume of leg kicks and jabs to Cerrone’s thigh. While Henderson opted for a constant stream of kicks and strikes, Cerrone looked to more significant strikes and scored with takedowns. Despite his high output and accuracy, Henderson, no stranger to winning controversial decisions of his own, found himself on the wrong end of the verdict this time around.

Uriah Hall needed less than a round to finish fellow middleweight Ron Stallings. Stallings, who stepped in on less than a week’s notice, put up a valiant effort for the first half of the opening round before Hall scored a knockdown. Hall followed up with big punches while standing over Stallings. The strikes opened a set of cuts around the eye of Stallings, and referee Herb Dean halted the action to allow the doctor to examine the cut. The doctor advised against allowing the bout to continue and the referee waived off the contest, awarding Hall with the TKO victory.

Lightweight Gleison Tibau is known for his tendency to grind out decisions, and his fight with Norman Parke to open the main card was no exception. Tibau edged Parke on the feet and in the clinch, while adding a couple of takedowns for good measure. After three grueling rounds, Tibau had done enough to earn the nod on two of the three scorecards for the split decision win.

Cathal Pendred struggled with the speed and movement of Sean Spencer, but the Irishman managed to walk away with an extremely questionable unanimous decision victory in their welterweight contest. Spencer was able to rock Pendred in the opening stanza and displayed the superior striking throughout the contest, but Pendred did enough to steal the decision.

Lorenz Larkin impressed in his move down to the welterweight division. Larkin brought an early end to the evening for his foe, Boston favorite John Howard. Larkin rocked Howard in the opening stanza and followed up with additional strikes to force the TKO stoppage.

In a grinding fight full of clinch work, lightweight Chris Wade outworked Zhang Lipeng to take a unanimous decision win. Wade endured three groin shots, the last of which forced the referee to deduct a point from Lipeng in round two. With the point deduction, Wade took scores of 30-26 from all three judges for the victory.

Patrick Holohan delivered the first win of the night for the SBG Ireland camp. The Irish flyweight’s grappling arsenal proved to be too much for Shane Howell, who spent portions of all three rounds fending off Holohan’s rear-naked choke submission attempts. Holohan swept the scorecards with 30-27 scores across the board to take the unanimous nod.

Lightweight Johnny Case put on a dominant display on his way to a victory over Frankie Perez. After controlling Perez on the mat and scoring points with ground-and-pound through two rounds, Case increased his assault in round three when he landed a series of elbows and punches to the downed Perez to force the TKO stoppage.

After a strong start, featherweight Sean Soriano succumbed to a late submission from Charles Rosa. The questionable stoppage came on a single tap from Soriano after he was caught in a D’arce choke by Rosa, who had pursued a number of submissions throughout the contest. Rosa took the victory with less than 20 seconds remaining in the fight.

Light heavyweight Sean O’Connell struggled with the length of Matt Van Buren for two rounds before staggering his taller opponent in the third frame. O’Connell kept applying pressure and landing punches until the referee stepped in to save the dazed but still standing Van Buren. O’Connell was awarded with the stunning third-round TKO victory.

After two close rounds, Joby Sanchez turned it up in round three of his flyweight affair with Tateki Matsuda. Sanchez did just enough to edge Matsuda on two of the three judges’ scorecards for the split decision victory.