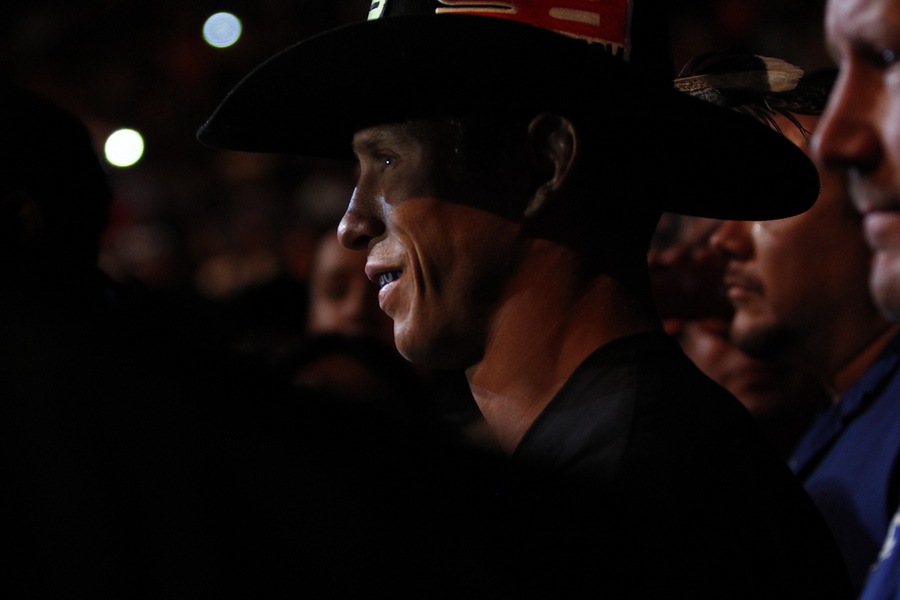 Could a Lightweight Title Shot Be in Donald Cerrone’s Near Future?

Most fans might find it surprising that Donald Anthony Cerrone could potentially be competing for his first shot at a UFC world title in 2015, but a win over No. 8-ranked Myles Jury this Saturday at UFC 182 could set up exactly that for the prolific and entertaining “Cowboy.” With four bouts, and four wins in 2014, Cerrone would seem primed and ready for a crack at UFC lightweight gold, except for one major factor. UFC President Dana White has gone on record stating that fellow lightweight Rafael dos Anjos will receive the next crack at current champion Anthony “Showtime” Pettis. Regardless of who wins that bout, dos Anjos and Pettis are the last two men to defeat the wild and hard-working Cowboy from New Mexico. This leads to the question of not if Cerrone is deserving of a UFC title shot, but if he is ready for a rematch with either Pettis or dos Anjos.

In 2014, no top-ranked lightweight was more active in the division than Cerrone. In fact, since Cerrone made his UFC debut in February 2011, he has fought a total of 15 times, for a yearly average of almost four fights per year. Few athletes in the UFC, regardless of division, can match such a pace. During the same time frame, dos Anjos and Pettis have fought a combined 17 times, only two bouts more than Cerrone. Considering the record, and the popular fighter catchphrase of “iron sharpens iron,” you could make a strong case that despite losses to both men, Cerrone has improved more due to the quality and quantity of his fights since his losses to both.

2014 saw Cerrone take home wins over Adriano Martins, Edson Barboza (ranked No. 6), Jim Miller (No. 11) and former Bellator lightweight kingpin Eddie Alvarez (No. 10). The win over Martins was the only victory over a non-top-ranked opponent in 2014, but even that win was an impressive first-round “Knockout of the Night” winner.

While training camps and teams certainly do improve the abilities of mixed martial artists, any would tell you that nothing compares to actual in-ring competition. Working off that assumption, a strong argument could be made that despite losing to both men, Cerrone has actually improved more than either since being defeated by both men in a roughly seven-month stretch in 2013. Pettis has just two bouts since defeating Cerrone, whereas dos Anjos has remained more active with four bouts since defeating “Cowboy.”

Since the losses to Pettis and dos Anjos in 2013, Cerrone has appeared both more focused and more aggressive in the Octagon. In addition to his wins in 2014, Cerrone also has victories over Evan Dunham and K.J. Noons, and with Cerrone fighting in what most consider as the deepest and most talented division in the UFC, even non-ranked wins are impressive. The depth of talent in the UFC lightweight division means that even elite-level athletes can remain unranked. And while the wins are impressive on their own, the manner in which they were achieved is equally impressive. The victories over Dunham and Barboza were submission finishes. Cerrone delivered head-kick knockouts of Miller and Martins, and the win over Alvarez was as clear cut and dominant of a win as one will see in mixed martial arts.

Examining the obviously impressive resume of Cerrone only seems to reinforce the fact that Cerrone is ready for whomever emerges victorious between dos Anjos and Pettis. Cerrone improves every time he enters the Octagon, and he enters the Octagon at a rate that has to make UFC matchmaker Joe Silva smile and fellow lightweights grumble in awe. With a sixth bout since losing to dos Anjos only days away, a victory over Jury would only solidify the thought that Cerrone is indeed ready for his first shot at a UFC belt.