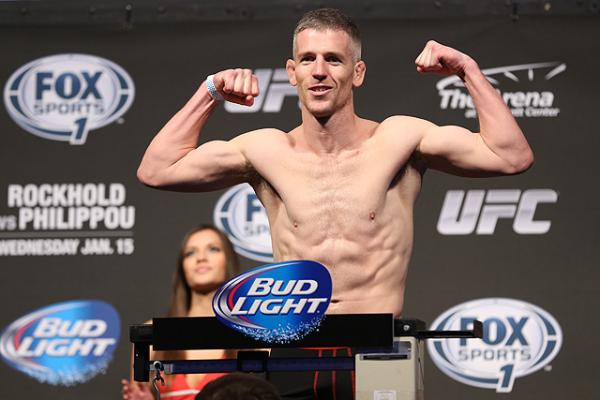 What prevents the average person from missing work? Vacation, illness, new children and the loss of a family member are probably the top four reasons. However, for the nearly half a million National Guardsmen currently enlisted in the United States Military, there are obligations above and beyond other employment that can cause some time off from work.

At a bare minimum, there are monthly and annual events that contractually take precedent over all other activities. Fortunately, the great organizations of the country understand what comes with the employment of a Guardsman, so they usually work around these obligations.

Garett Whiteley is a son, a husband, a father and a professional fighter, currently under contract with the UFC. In addition, he is also a full-time employee of the U.S. Government.

Whiteley’s last Octagon appearance was 11 months ago. His long layoff was not due to injury, vacation or any other extenuating circumstance. In fact, it was very much the opposite. He is a healthy, extremely busy employee who hasn’t missed much time at all. However, as most people in the fight game know, timing is everything.

“I’ve still been training and working out and everything, but I’m still full-time with the Army National Guard,” Whitely told Combat Press. “Our summers can get pretty busy, especially with our annual training. So, I got a call — it was probably back in May — and [UFC matchmaker] Joe Silva wanted me to fight in June, but it was two weeks after our annual training. I just couldn’t do it. And then they called me again on short notice, like 10 days, and there was no way I could make weight. I hate to turn down fights, but you can’t do it if you’re not going to make weight or not going to be ready.”

Last year, Whiteley made his UFC debut, entering the cage with a 7-0 pro record. After suffering his first loss by first-round TKO to Alan Patrick, he got right back to training. Three months later, he was in the Octagon again, facing former The Ultimate Fighter contestant Vinc Pichel.

Both Whiteley and Pichel were looking for their first UFC win on Jan. 15. Whiteley came to fight and Pichel came to wrestle. In that bout, wrestling took the judges’ nods.

“I really thought he was going to want to stand up with me,” Whiteley admitted. “I hadn’t really worked a lot of takedown defense — not that that’s an excuse — but I thought that was going to be more of a stand-up fight. He pushed me up against the cage a lot and was taking me down, and I think that’s why I lost the fight. I spent a little too much time on my back and losing takedowns. He was a little bit stronger than I was.”

The Indiana fighter has a lot to offer in the wrestling department, but he came looking for a striking match that just wasn’t there. While he wanted to get back in the ring sooner, this long layoff may have been just what he needed.

Two months ago, the UFC brass came knocking again. This time, Whiteley was ready to accept the challenge. With plenty of time and no prior obligations, he was in a great position to cut weight, work on his mistakes, and set himself up for that first UFC win that eluded him in his first two fights. On Saturday night, at UFC on Fox 13, Whiteley will step into the cage across from an opponent who has yet to see an Octagon victory of his own. That opponent is David Michaud.

“This time they called me [and] they gave me eight weeks, which was perfect,” said Whiteley. “I’m really excited about this fight, and it’s going to be a lot of fun.”

Michaud is a former contestant from The Ultimate Fighter 16. He is 7-1 as a pro, with his sole loss coming in the UFC, and he has finished his opponent in all but one of his wins. The South Dakota fighter is three inches shorter than his opponent, but has a much thicker build. Whiteley knows exactly what to watch out for this time around.

“I know he’s pretty new to the UFC,” Whiteley explained. “I think he tried out for The Ultimate Fighter but lost the fight to get into the house. Then, he went outside the organization and won some fights.

“He’s dropping down from 170 [pounds] — his first fight in the UFC was at 170 — so, he’s dropping down. He’s 5-foot-9, I think. I’m sure he’s going to be a pretty stocky, strong guy. From what I can tell, it looks like he’s a wrestler. Just from the stuff I’ve seen, it looks like he’s got a good chin, good wrestling [and] good top game, so, again, I’ve just got to stuff those takedowns and stay on my feet.”

“I’ve really been working a lot on my takedown defense,” Whiteley elaborated. “I’ve really upped my strength and conditioning. My conditioning has always been good, but we’re really working the weight room for this fight for the last four months. I really feel a lot stronger, and I’m a lot better at stopping and stuffing takedowns. The guy I’m fighting probably watched the Pichel fight for sure, and I’m sure he’s going to want to do the same thing. I just need to stop those takedowns [and] stay on my feet or take him down.”

When a fighter expects a specific type of fight, like Whiteley did in his last outing, a simple change of pace by the opponent can prove to be detrimental. However, if the Army has taught him anything, it’s how to adapt and overcome. Mixing in his wrestling techniques with his effective striking game will hopefully yield a much better Whiteley, one who is ready for that first UFC victory. However, his fighting and military careers are only part of the man that his family knows and loves. There is a lot of life going on outside of the office and the gym.

“[My wife’s] awesome, man,” Whiteley said. “There’s no way I could do any of this without her. I’m the one that takes Greyson to day care. So, she gets up at 4:30 in the morning and goes and does her workout, because she knows that after work I’m going to be going to my MMA practice and she’s not going to be able to work out because she has to watch him.

“So, she sacrifices a lot too, having to get up early to go work out and do that kind of thing. I get up with him in the morning and get him ready, take him to day care, go to work, and then I pick him up, drop him off at her work and I head straight to practice. Then, I’m at practice until 7:30, go home and eat dinner, and then go to bed. So, during fight camp, it’s all fight. I know it’s tough on her, but I couldn’t do it without her.”

For a guy who has two jobs and a family, life seems extremely busy. Almost too busy. Even with a partner to share the load, it has to be difficult to enjoy any of it. Whiteley actually embraces every moment, but he is ready to get done with this camp.

“I love my job,” the busy dad said. “I love being a part of the National Guard. And, I’ve got my son — he’s a year and three or four months now — so, that’s always awesome.

“He’s getting big, moving around, talking, and that’s always exciting. It’s a full-time deal — training, having a kid and working full-time — so, I’m a pretty busy guy. It’s just getting to the point in training where I’m ready to fight. You get to the point in your training camp where you’re tired of punching the same guys in the face and you’re ready to just get out there and hit somebody new. I’m just really ready to go.”

Well, Whiteley’s camp has pretty much wound down now. The next step is to get in the cage on Saturday night, live from the U.S. Airways Center in Phoenix, to face off against Michaud and earn that much-needed Octagon win. He knows what he was good at, he knows what he got better at and, when he steps into the cage, he knows exactly what fans can expect to see. Then, it’s back to work.

“I’ve really been working my takedown defense, and I feel my stand-up is a lot better than his. I haven’t really mixed in much of my wrestling in the last few years. I’ve got a really good top game and some really good ground-and-pound, so if I can get on top, I’m definitely going to showcase that. I’m going to showcase my stand-up and maybe you’ll see a little wrestling out of me.”

Whiteley would first and foremost like to thank his wife, Sandy, and his son for sticking by his side throughout this camp. He would also like to thank all of his coaches and training partners at Indy Boxing and Grappling, including his head coach, Pat McPherson, Westside MMA in Little Rock, Ark., including coach Roli Delgado, his family, friends and all of his sponsors, including Bad Boys Bail Bonds, Always Pure Water Filtration and Hayabusa. Follow Garrett on Twitter: @GarrettWhiteley
Advertisement