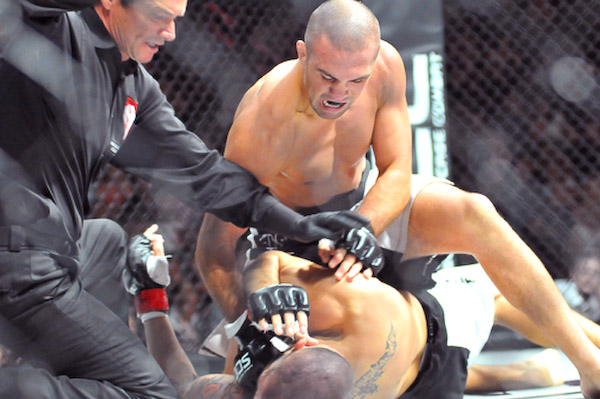 On Oct. 17, Bellator heads to Council Bluffs, Iowa, and the Mid-America Center for Bellator 129. The card features a four-fight main card headlined by a lightweight showdown.

That lightweight bout pairs Iowa natives Josh Neer and Paul Bradley. Both fighters are UFC veterans and should combine for an electric fight to end the night.

In the co-main event, Houston Alexander returns against Virgil Zwicker. Zwicker is a short-notice replacement for James Thompson, who pulled out due to injury. Rounding out the main card are fights at 170 and 185 pounds. In a welterweight clash, James Terry takes on Andre Santos. At middleweight, Joe Vedepo meets Davin Clark.

Josh Neer makes his return to a major promotion to take on another UFC veteran, Paul Bradley.

Neer is certainly a fighter to watch in Bellator. He has a wealth of experience and has faced a ton of great talent in his career. His first fight in Bellator back in 2010 came against longtime Bellator champion Eddie Alvarez. Other fighters on his resume include Gleison Tibau, both of the Diaz brothers and Josh Burkman. He is a very well-rounded fighter with knockout power. Of his 36 wins, 32 have been finishes. Since his most recent UFC run came to an end, he has submitted two of his opponents and knocked out another. It’s difficult to predict how Neer will get the finish if he does win, but he will typically avoid the scorecards regardless.

Bradley is another fighter with a ton of experience. His record includes fights against Karl Amoussou, Luke Rockhold and Mike Pierce. The 31-year-old was a two-time NCAA Division I All-American wrestler at Iowa. He likes to shoot for the takedown and will certainly do so against Neer.

Can Bradley get the takedown? Of course, but Neer has faced tougher talent before and won. This will be a close fight, but it will be Neer who emerges with the third-round stoppage victory.

Virgil Zwicker will be a late replacement for James Thompson. He comes in on a week’s notice in this 215-pound catchweight fight against Houston Alexander.

Alexander is a heavy hitter. The UFC veteran’s power has been well documented in his career. However, his career has been a mixed bag since he knocked out Keith Jardine in a fight that really put Alexander on the map. Alexander is 1-1 under the Bellator banner. The 42-year-old has 11 knockout victories, including in his last fight at Bellator 117 where Matt Uhde couldn’t continue and Alexander took a doctor’s stoppage victory.

Zwicker is also a powerful striker. He has faced heavy-handed opponents before, but the outcome hasn’t always been in his favor. Zwicker took on Lavar Johnson and had trouble in that fight, where he was eventually knocked out midway through the first frame.

This fight will come down to who can land that knockout blow first. Alexander’s age is a concern, but he has the experience and hands to win this fight. Alexander by first-round TKO.

James Terry is a very easy fighter to break down: His game relies on his hands. The Strikeforce veteran has knockout power, as evidenced by his eight victories via strikes. There isn’t much else to say. If Terry wants to win this fight against Andre Santos, he will need to keep it on the feet. Terry needs to keep distance and set the stage for his power shot.

Why must Terry keep it on the fight? Well, because Santos is a grappler. The Brazilian has 22 submission victories in his career and could very easily make Terry No. 23. Santos is coming off a knockout victory that gave him his fifth consecutive win, but do not let that fool you. For Santos, this fight will be won through his grappling and submission skills.

Santos has been fighting on the regional circuit in South America, but that doesn’t mean he can’t win this contest. Every fight starts on the feet, but Santos has the ability and grappling to make this a ground battle.

Santos by submission in the second round.

Middleweights Joe Vedepo and Davin Clark kick things off in the first fight of the Bellator 129 main card.

Vedepo has well-rounded skills which have resulted in six knockout wins and seven submission victories. Expect the unexpected—Vedepo pulled off a slick shin choke at Bellator 80. If you think you’ve seen his full playbook, you would be very wrong.

Clark is an American Kickboxing Academy product. He will come into this fight on point with his striking. Clark scored an impressive head-kick knockout his last time out that really showcased just how good his striking can be. This will be Clark’s first time at the big show, as he is making his Bellator debut.

Both fighters make very good cases for victory in this affair. It could certainly go either way, but Vedepo holds the edge in experience, and that could be the deciding factor.