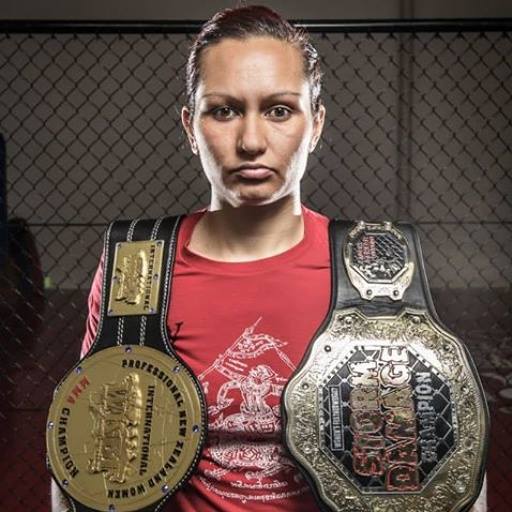 The cheers of an excited crowd echo throughout the Tuggeranong Basketball Stadium. As the cheers get louder, the wooden floor begins to vibrate. Two women are fighting their hearts out inside the cage. It marks the third fight of the night for both ladies. Neither fighter is in their hometown, or even their home country, but everybody in attendance is watching in anticipation.

Faith Van Duin was one of those fighters. She went on to make Australian MMA history when she won the Storm Damage featherweight title in the first-ever women’s one-night elimination gauntlet on Aug. 31, 2013. In front of an elated crowd, she quadrupled her professional record. First, there was the TKO victory over Michelle Peruzzi. Then came a split decision win against Arlene Blencowe. Then, as the wooden floor rumbled, Van Duin finished Kate Da Silva in the fourth round via a triangle choke submission.

Van Duin has been absent from the cage since that night. She has yet to fight in 2014, and her Storm Damage title defense on Aug. 30 will mark almost 12 months since she last competed in mixed martial arts. At the last Storm Damage event, where she won her featherweight title, Van Duin had to compete three times in the one night in order to secure the belt. This time around, she only needs to don the gloves once, but the face staring back at her from across the cage will be a familiar one. Van Duin faces Blencowe in a rematch from their tournament bracket semifinal bout.

In their previous meeting, Van Duin won a hard-fought decision in a fight that saw the two compete in three-minute rounds. This time around, the pair square off with full five-minute rounds. Van Duin makes the trip to Australia fresh off signing with Invicta FC. She puts her title and her undefeated record on the line.

“I plan to be undefeated until I retire,” Van Duin exclaimed to Combat Press. “But I’m sure Arlene will have something to say about that [laughs].

“It feels awesome to be in fight camp and preparing for this fight after such a long layoff. It’s my first title defense ever, so it’s new territory for me, but I just look at it as another fight. I’m excited to show that the first time I won the belt wasn’t a fluke, and I’m definitely excited to show more skill in this fight. I don’t think longer rounds matter if you train for them. I will fight the fight just like I did in our first fight. I expect nothing but the best from her as I’ll be bringing the best of me.”

With her unblemished record, Van Duin has climbed the ranks of the featherweight division. She is seen by her peers as the top female fighter to come out of New Zealand. That distinction isn’t enough to satisfy Van Duin, though. She is shooting for the stars.

“In many circles, I’m not seen as the No. 1 female fighter in New Zealand,” Van Duin confessed. “But I ain’t fussed, as one day soon I will be No. 1 in the world.”

People compete in sport for a variety of reasons. Some want the notoriety. Some will do it for the money. Others want to prove that they are the best in the field. Then there are those unique individuals for whom none of that matters. The fame isn’t important to them. The titles and recognition come second to something else, something far more important. Those people do what they do to try to set an example.

“I started this to show my daughters that, with hard work, anything is possible,” Van Duin revealed. “And to this day that is my full motivation to continue my journey to becoming No. 1 in the world.”

For most mixed martial artists, fighting isn’t just about what takes places in the cage or ring. It’s about the day-to-day fight that an athlete must endure in order to strive to be the best that they can be. For the vast majority of professional competitors, the idea of being a full-time fighter is a distant dream. However, there are always people around that will endure their own sacrifices to make sure that a fighter has the best opportunities. Van Duin has someone close to her heart that does everything in their power to help her pursue her dreams.

“I would like to thank my mother, especially, for all the hard work she continues to do for me—from helping with the girls to [spending] late nights cooking bread to help raise funds for my fight expenses,” Van Duin admitted. “My daughters have been my motivation [as well] and have been pushing me to be the best I can be.”