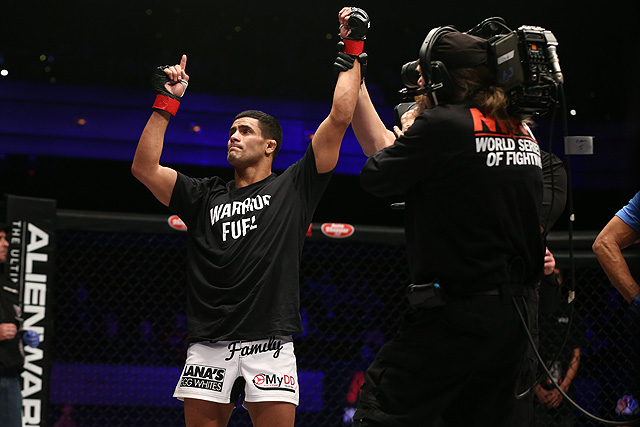 ONE Fight Night 6’s Johnny Nunez: Fighting for His Family

The flame of family burns bright, and it can be a tremendous motivator for anyone. When two people choose to have kids, they are immediately signing themselves up for a dedicated journey full of highs and lows. Overall, however, having a family can be one of the most fulfilling experiences in life.

When Johnny Nunez first appeared on The Ultimate Fighter reality show for 22nd season in 2015, he didn’t know what life had in store for him. He was 5-1 as a professional mixed martial artist, and he had just fought twice for World Series of Fighting. He went onto the show and was picked for Urijah Faber’s United States team, as they took on Conor McGregor’s team, which was all European fighters.

Nunez had a background in wrestling, but that would prove to be no match for Ryan “The Wizard” Hall’s extremely high-level grappling. After getting submitted by Hall, he was able to fight again against David Teymur, and he lost that one by decision. While most fighters who compete on TUF do not make it to the finals, Nunez kept his head high and went on to win another fight in WSOF before returning to the redemption season at TUF 25. It was then he was submitted in a battle with James Krause. It was a al a great learning experience.

“I liked both seasons the same, you know?” Nunez told Combat Press. “I learned that it’s better to be in your comfort zone and your own training camp and with your own coaches. That’s a big part of your fight is the training camp, and I’ve learned to realize to enjoy it and not take things so seriously and have fun.”

Nunez and longtime UFC vet and former champion Miesha Tate began a relationship and had a daughter about four years ago. It was around that time he would fight for Bellator, where he beat Josh Wick by decision in Sep. 2018. Tate would go on to become a Vice President with ONE Championship, so they took their family of three over to Singapore. Tate had retired as a fighter after Nov. 2016, but was an integral part of helping to grow ONE. Nunez was busy taking care of his family, but was still in the fight game, so he signed with ONE, and had one fight against Kazuki Tokudome in Oct. 2019, which he lost by decision.

“I was living in Singapore, and I was part of the Evolve Fight Team and really didn’t even have a coach,” said Nunez. “The coach was in limbo, and I wasn’t able to have a fight camp where I’m used to having a fight camp at Xtreme Couture. I was at 170 [pounds]. They believed I was a 170-pounder, which is lightweight [in ONE], but, man, I’m not even [five-feet-ten-inches-tall], and those guys are bigger. Tokudome was a way longer fighter, so everything just wasn’t in the right situation being in Singapore. I enjoyed it. I enjoyed being in Singapore. I enjoyed being on the Evolve Fight Team, but it just wasn’t for me. What I took away from that fight was that it wasn’t my weight class. It didn’t feel great. I got injured early on, and that’s what happens when you’re fighting up a weight class.”

Nunez is still signed under ONE, but he hasn’t fought since the Tokudome fight. He and Tate had another child while living in Singapore, but soon after, the COVID-19 pandemic struck, and things started shutting down quickly.

“I had the opportunity to be on the fight team, but I only fought one time when I was over there, which I think was kind of odd,” said Nunez. “They weren’t putting me on any of the cards. It took about eight months for me to get a fight, so it just wasn’t a good place. But we enjoyed it. Our son was born out there. Our daughter experienced living abroad in different cultures. So, we took the positives from it. Obviously, COVID happened, and we decided to come home. It was time to be close to our loved ones and enjoy life.”

Nunez and Tate moved back to Las Vegas, Nev., and continued to train at Xtreme Couture. Nunez, who has been work as an EMT is now in line to get on board with Lss Vegas Fire and Rescue as a firefighter. It is a more long-term plan to provide for his family. Tate ended up back in the UFC Octagon in 2021, and she is now 1-2 since returning. Nunez is also back in action, as he finally got signed to fight jiu-jitsu legend Garry Tonon at ONE Fight Night 6 tonight on Amazon Prime Video.

“It’s my kids that push me, you know?” said Nunez. “There was a point after my daughter was born that I wanted to maybe step away and just focus on her. And then, my son was born and they started getting mobile and actually doing sports. My daughter’s wrestling, and my son’s swimming, gymnastics and soccer. I want to be able to be a good role model for them, so I just decided I’m going to finish out my career and, hopefully, show them what hard work looks like. That’s the basic reason – my kids. I’ve got nothing to prove to myself. I’ve fought for some of the biggest organizations – UFC, Bellator and, now, ONE – so, it’s not anything for me. It’s all about my kids.”

Tonon joined ONE a few years ago, and he was on a six-fight undefeated streak before dropping a featherweight title fight to Thanh Le last March. He also lost a grappling match to Tye Ruotolo a couple months later, and has not fought since. Nunez understands the challenges facing a leg-lock specialist like Tonon, but Le laid out a blueprint for victory.

“He’s a very decorated grappler,” said Nunez. “I don’t take him lightly, you know, but this is a fight. This isn’t a grappling match, and it’s not combat jiu-jitsu. I’ve been working on the 50/50 position and all those positions. I’ve fought somebody I believe is just as good as him, and that’s Ryan Hall. It didn’t turn out my way, but I learned a lot from it.

“Going into that fight, I had maybe like about 24 hours to prepare for it, but I’ve had about 10 weeks now. I’m working with the best. I have access to, at least, 20 multi-time world champion jiu-jitsu guys – no-gi guys – here, so I’ve kind of been able to take a piece from everybody and kind of put my style into it. It’s going to be fun.”

For Nunez, life is all about family, and fighting is a big part of that. He and Tate are longtime martial artists and, now, with a four-year-old daughter and two-year-old son, they have a renewed focus on life like they never had before. Between a real-estate business, a hyperbaric treatment center, and several other endeavors, they are building a future for their kids to be proud of. The next step would be a big win over Tonon tonight, live in front of millions of viewers around the world.