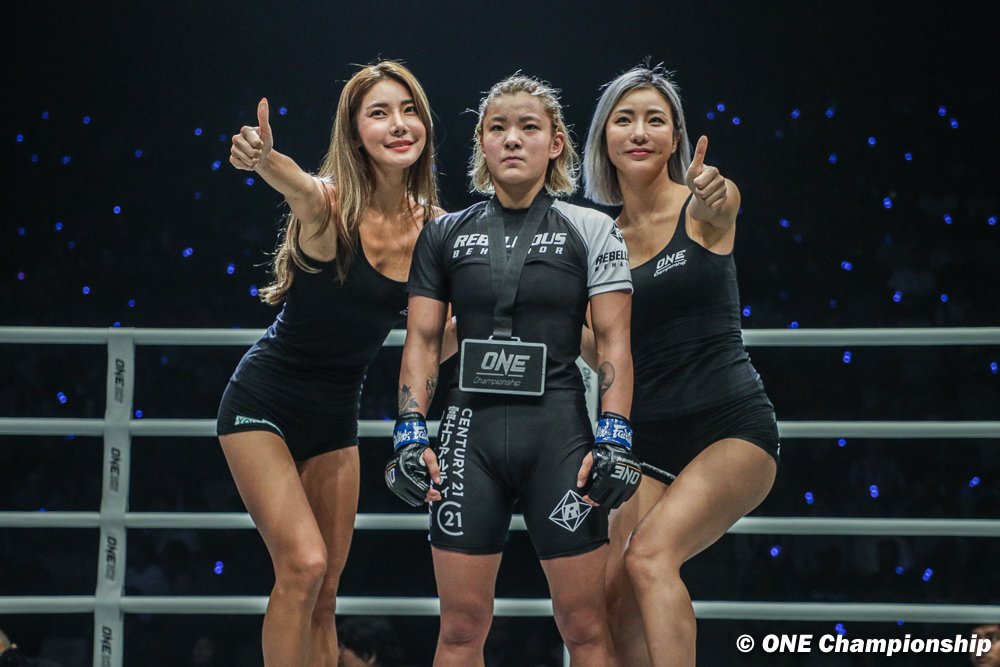 Itsuki Hirata made waves in ONE Championship’s atomweight division, with an undefeated start to her professional career. However, the Japanese star suffered her first defeat at ONE X in March of this year, going down to Jihin Radzuan by a narrow split decision.

But the loss has only reinvigorated her spirit to get back inside the ONE Circle, which will happen at ONE on Prime Video 1: Moraes vs. Johnson II on Friday, Aug. 26, when she faces Chinese warrior Lin Heqin.

With her first defeat eating away at her, Hirata decided to make a change and push herself to train outside of Japan. Hirata moved to Long Island, N.Y. to spend time with Serra-Longo Fight Team, and she credits the talent in the gym as a big reason for making the move.

“There are many athletes with a long reach, height, and many female athletes,” Hirata said. “I thought, ‘I’m going to compete against non-Japanese athletes, so let’s go train abroad and challenge the people I’ve never experienced.’

“We spar in a style where I stand at the base and partners take a turn. My mentality has been strengthened to survive in an environment where I spar with tough fighters. I thought I had a stronger heart than others, but I realized the guts of the fighters I’ve trained with there are stronger than mine. My coach has said I don’t have the stamina for striking, so I’ve been strengthening it by training nine minutes per round.”

The focus on her striking will come into play against Heqin, who has experience in kickboxing on the global stage. But Hirata believes she can weather the storm and bring the action to the canvas where she believes she holds a definitive advantage.

Her striking coach will make the walk with her in her upcoming matchup, showing just how dedicated she is to her new craft. The Japanese star is hoping she can lean on her coach for any necessary adjustments that will need to be made against her skilled opponent.

“The striking coach Nestor [Marte], who will be on my corner in the upcoming fight, is very harsh, but he tells me, ‘this is affection,’ after every practice,” Hirata said. “I spent a month there this time because I was only able to go for two weeks last time. I practice in a way that reminds me of the days when I belonged to the judo club at junior high school. I practice so hard that I can believe they’ll have to pay off.”

With the expectation of a dominant victory, Hirata is ready to shine at ONE’s U.S. primetime event. And, with her recent stay in the United States, “Android 18” has already felt her fanbase grow domestically. Now the Japanese athlete is excited about the prospect of gaining more fans with Prime Video.

“I’m very happy that I can showcase it not only to the fans in Asia but also to the fans worldwide,” Hirata said. “I felt the impact of cross-border broadcasts, especially when the audience in the U.S. recognized me and talked to me.

“I know American people love to get excited by combat sports, and I’m very excited to perform for them because ONE has chosen me for the broadcast in the U.S.. Of course, I can’t wait to showcase my skills to the fans globally because the broadcast on Prime Video will allow more people around the world to watch.”