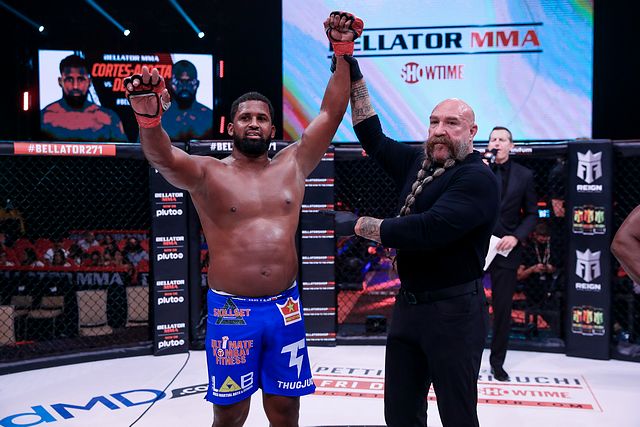 The show, which continues on its home on ESPN+, aims to give top prospects a chance to impress the UFC brass in an attempt to earn a contract with the company. The show’s second episode of the season takes place on Aug. 2 and streams live on ESPN+ starting at 8 p.m. ET.

It’s not often that a heavyweight is one of the best prospects on a season of the Contender Series, but it appears Waldo Cortes-Acosta could be one of those guys. The six-foot-four-inch Dominican is the LFA heavyweight champion and won that by besting another top prospect in Thomas Petersen. He has excellent boxing skills, which he displays when he’s on his feet, and he’s an excellent athlete when it comes to movement and power. He’s 30 years old right now, so it looks like he’s beginning to hit his prime. He will take on 10-fight pro Danilo Suzart in his bout, and, should he get by the Brazilian, he could be a UFC roster member entering the company’s division with some solid hype.

Two hungry young guns. Two fighters with 5-0 records. Two East Coast fighters. That is what you are going to get when Connor Matthews steps in the cage with Francis Marshall. Both guys get after it once the cage door closes. Marshall is a protégé of Kurt Pellegrino, which explains why he’s so dangerous on the mat. Four of his five wins have come by submission, and all of them were by rear-naked choke. As for Matthews, he’s a disciple of Joe Lauzon, which similarly explains his style of nasty ground game and effective striking. These guys styles will mesh well, which is why this is going to be a dynamite fight.

If you don’t follow regional MMA, then you probably have not heard of Billy Goff. That’s a real shame, as he’s a very exciting fighter who has a knack for violence. The two-division CES Champion is just 23 years old and has already shown great improvement from fight to fight. He loves to bang on the feet and does so effectively. He isn’t looking for points. He’s looking for stoppages. His most recent fight came against Contender Series veteran Justin Sumter, where he moved up to 185 pounds and ravaged him with a nasty finishing sequence of elbows. He takes on Contender Series vet Shimon Smotritskiy here on Episode 2, so he has a chance to add another guy with Contender Series experience to his collection of scalps.

Although he takes part in the headliner of this second episode, based on the participants of this episode, Charlie Campbell is the underdog of the bunch. That’s not to say Campbell isn’t skilled; he is. Not only has he improved much since his late 2019 loss, but he’s done so – especially lately – against more reputable talent. He’s tough as nails and he’s nasty on the feet. That could pay dividends against his current opponent Chris Duncan, who was knocked out on last year’s Contender Series by Slava Borschev. Under the tutelage of Ray Longo and Chris Weidman, Campbell is an interesting prospect, but as of now he’s the longshot of the group on this episode.

Because of the amount of guys on this episode with lower amounts of experience, I expect some guys to get developmental deals. In terms of signings, I think there should be just two here.

The best prospect on the card, Cortes-Acosta, will get the nod because he’s a talented fighter in a heavyweight division in need of additional talent.

Also, the exciting, violent Goff gets in with another highlight finish of Smotritskiy. He’s a two-division champion already at this age and Dana White will love his style, showing his appreciation for it in the form of a UFC contract.