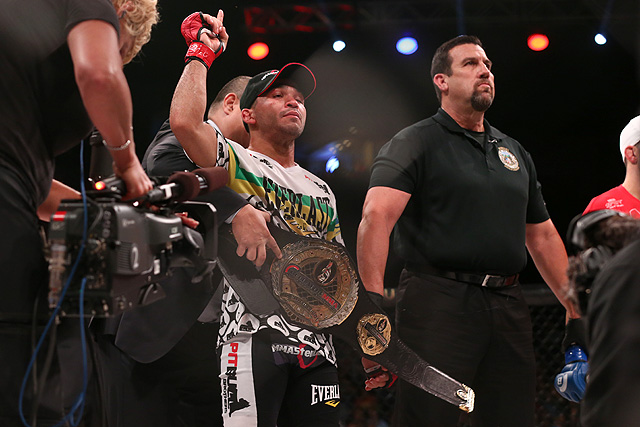 With MMA fans eagerly anticipating the evening’s main event, Bellator featherweight champ Patricio “Pitbull” Freire and challenger Daniel Weichel made it a point to get everyone talking about their co-headlining fight following Bellator 138.

The action started off at a tepid pace with both fighters looking to avoid taking too much damage in the opening minutes. It was an odd start considering Weichel typically only moves forward while Freire is known for striking with heavy hands early and often.

“I know one of the best things this guy does is put pressure on guys,” Freire said through an interpreter in a post-fight interview with Combat Press. “I was trying to get him to come in, but I made a mistake and he got me with a nice combination.”

Indeed the fight looked to be over at the close of the first frame. After the two circled each other for the better part of round one, Weichel hit the champ with a knee against the fence that visibly stunned Pitbull. The strike came nearly simultaneously to the bell to end the round. With referee “Big” John McCarthy stepping between Weichel and the fallen Freire, it looked as if Weichel had won the title.

“I’ve never been hurt that much in my life,” Freire explained. “I was hurt when [Daniel] Straus knocked me down, but he hit me with two combinations and I was hurt.”

Despite Weichel — and fans in the arena — believing that the challenger had won, the fight continued into the second frame. Weichel pressed forward, looking to capitalize on the damage he inflicted in the first round. Freire again played the part of counter-puncher, drawing Weichel in but this time landing his signature left hook to the jaw of Weichel. With one punch, Freire ended the contest in dramatic fashion.

After the fight, in the post-fight interview, Freire dropped a great line to Bellator commentator Jimmy Smith: “I’m here. You want my belt? I’m here. C’mon!”

It was a glimpse into the personality of one of Bellator’s homegrown champions that fans haven’t seen as much of before. With an exorbitant amount of viewers watching at home, Freire instantly became a household name with his knockout and open challenge to the rest of the division.

“When you’re champion, everyone that comes in there is challenging me,” Freire said. “I was just letting people know that I’m here — come and get it.”

Perhaps the best part — at least to viewers at home — of Freire’s remarks from the evening were that they were in English, without the aid of an interpreter. A lack of speaking English is a knock that quite a few fighters from Brazil have received over the years and one of the criticisms of UFC featherweight champ Jose Aldo.

“I believe it’s important,” Freire said in English. “I have a teacher for learning English. I have my coach. I’m learning some things and [I am] trying to learn more.”

Freire comes from a country rich with MMA heritage, competes in one of the more exciting divisions in the sport and has dynamite power in his hands. Language barrier aside, the champ has the tools to become a huge star under Scott Coker’s Bellator.