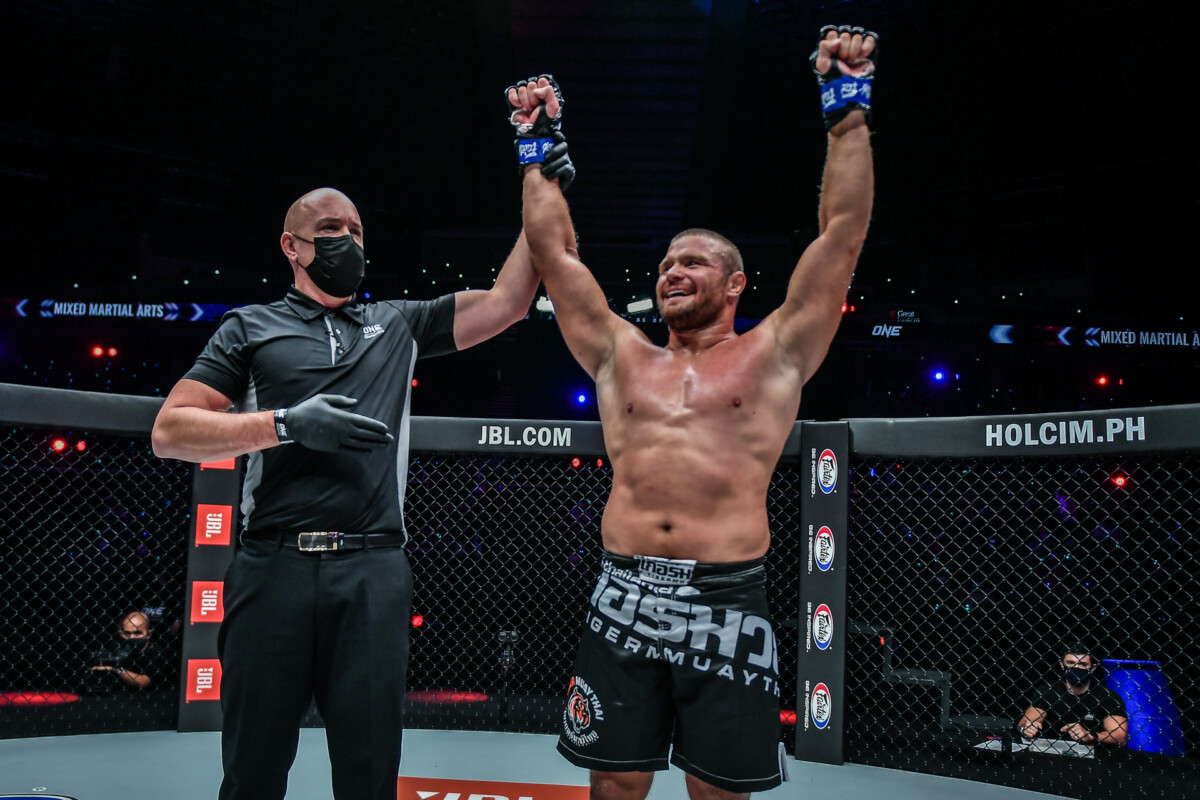 ONE Championship goes live with a thrilling 12-bout card at on Friday, Feb. 11. ONE Championship: Bad Blood features 10 mixed martial arts battles and a flyweight Muay Thai title-contender bout that are guaranteed to entertain its global audience.

With such a jam-packed slate, it’s difficult to narrow down the main reasons to tune in, but that’s exactly what we’ve done for you. From start to finish, ONE Championship: Bad Blood is going to be exciting, but there are three key elements that will surely grab your attention on Friday night.

Heavyweight Firepower
Three key heavyweight bouts are featured on the ONE Championship: Bad Blood lineup, and it will be capped off with the crowning of the ONE interim heavyweight champion.
Advertisement

Charismatic Russian Anatoly Malykhin will try to back up all his talk against Belarusian star Kirill Grishenko in what promises to be an exciting battle between undefeated heavyweight talents. And with Arjan Bhullar on the sidelines, whoever wins the gold will be more than happy to carry the mantle.

Canadian Dustin Joynson returns against debuting Brazilian Hugo Cunha. Joynson last competed against Grishenko in his ONE debut, and although he came out on the losing end, he finished the bout with the better of the exchanges. If Joynson gives a convincing performance, he could reinsert himself into the title picture.

Opening the heavyweight action on the lead card will be American Odie Delaney making his ONE debut against Norwegian slugger Thomas Narmo. Delaney will be an interesting heavyweight to watch, with his NCAA Division I All-American wrestling background. The American Top Team product could be an instant force in the division and may be a breakout star of 2022.

Fast-Paced Action
The lighter weight classes will also be on display, with an incredible lineup of bouts that will deliver numerous highlights.

Those four bouts alone will entice martial arts fans. Every one of those athletes competes at a high pace and seeks finishes. The output of ONE Championship: Bad Blood should be incredibly high, and the moments without strikes should be few and far between. “The Lion City” will play host to a barrage of strikes as the leather flies on Friday.

Bi Nguyen Returns
Former Survivor contestant Bi Nguyen will return to the ONE Circle against Lin Heqin on the evening’s lead card. The Houston native has been in exciting scraps nearly every time she has featured in a ONE event, but the results haven’t always been consistent. After an upset win over Ritu Phogat, Nguyen dropped a narrow split decision to Jenelyn Olsim. Since then, Nguyen has focused on revamping her game at Xtreme Couture in Las Vegas.

As Nguyen revises her skills, it will be interesting to see what the new look “Killer Bee” will bring against her Chinese opponent. If Nguyen impresses, she could put herself back into the thick of things in the atomweight division as one of its most exciting and game competitors.

ONE Championship: Bad Blood will air live and free on Friday, Feb. 11. The lead card will begin at 5 a.m. ET on ONE’s official Facebook page. The main card follows at 7:30 a.m. ET on YouTube.