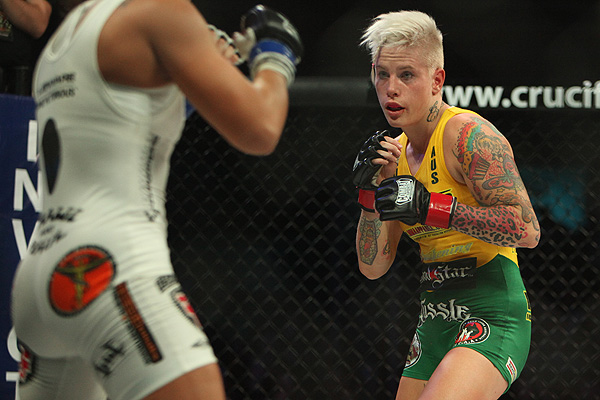 UFC’s Bec Rawlings: You Can Knock Her Down, But Lay Off Those ‘Blue Suede Shoes’

Well, it’s one for the money,
Two for the show,
Three to get ready,
Now go, cat, go

The sound of Elvis Presley’s voice blared over the sound system of the Palms Casino Resort. The Octagon and the King aren’t paired all that often, but this time around it’s a sight to be seen. A young, pretty, purple-haired fighter draped in the Australian flag appeared, and what you had was a strange sight being aired all around the globe.

Not everybody that should have been in the arena bopping away to Presley’s cover of the Carl Perkins classic “Blue Suede Shoes” could be there though, and that’s why Bec Rawlings brought the King along instead. That’s why, sometimes, things are different for a reason.

“I walked out to my step-dad’s favorite song, which I promised him before he passed that I’d walk out to,” Rawlings, who suffered a decision loss that night against Heather Jo Clark at The Ultimate Fighter 20 Finale, told Combat Press. “So it was a really proud moment for me. I wish he was there, but I knew that my mum was in the crowd and she was probably crying — which I was right [laughs]. It was a really proud moment to finally have my dreams come true. I got into mixed martial arts to lose weight and then I got into Invicta, which was my goal, and I never thought that I’d fight in the UFC — this was before they had women. And when I got that call from [UFC President] Dana White, it was a surreal feeling. But, it was nice to finally have it all come true.

“It was amazing. It was all my dreams come true. Obviously I would have liked to win, but I’m still proud of my performance. I went out there and fought my ass off. I felt like I really brought it. Me and Alex [Chambers] were the first girls in Australia to fight in the UFC, so we’re making history [and] so I can’t be too disappointed in myself.”

The ink had barely dried on her UFC contract when people questioned why a foul-mouthed, tattooed “bogan” should be representing her country in the sport that changed her life. Love her or hate her, though, Rawlings got there. And much like her multi-colored ink, her heart is on her sleeve.

“I think that a part of it was the TV deal with Fox Sports and Fuel TV. They kinda messed the fans around a lot and they didn’t know when to tune in to watch. I feel like they sorta lost interest in the show because they didn’t know when they could tune in to watch it. That definitely lost a little bit of the buzz about the show and about us Australians.

“I feel like the media, you’ve really gotta reach out to them and push them to give us women any exposure. But, I feel it’s the same with the guys in mixed martial arts as well. I feel that the media [in Australia] just tries to avoid mixed martial arts altogether, but obviously with the UFC coming to Melbourne, hopefully this year we start getting the recognition we deserve.”

The Ultimate Fighter 20 saw so much at stake for the 16 hopefuls, including Rawlings. For the first time in the history of the reality series, a champion would be crowned in the finale. Expectations were high for women who had been chosen to compete in the ground-breaking season, and it was no surprise that fans got the unexpected throughout the series, especially when it came to Rawlings, who maintained a high profile on the show even after she was bested by Tecia Torres in her lone fight on the series.

“I think fans expect us women to act like … supermodels? I don’t even know,” she explained. “They don’t expect us to be fighters. They think we’re these little angels that sit in the corner and do as we’re told and we don’t speak our minds. I feel like a lot of fans were kinda shocked by the way we handled ourselves, because they weren’t expecting it. You know, you watch any season with the males on it and we weren’t half as bad as them. But everyone’s just used to that, so I feel that [fans] were taken back a bit by the way we acted because we’re fighters. We’re not prissy little girls that are gonna mind our p’s and q’s. We’re in this sport for a reason. That’s because we’re not normal girls; we’re a different breed. I definitely think that the fans weren’t expecting what they saw.”

As each episode of the reality series aired, Rawlings found herself the target of many a fan through the various social media platforms. While she may not have fit in with the expectations of many mixed martial arts fans, Rawlings saw a picture being painted on the screen in front of her, and it wasn’t exactly in the shade that she had hoped.

“It was hard for me watching each episode, because I was a little disappointed they chose to air what they chose to air. It was a little annoying,” Rawlings admitted. “After my fight, I think I watched one more episode and then I was done with it. I didn’t really take in what people were saying. I got some positive comments from fans that know [what] to expect of me. They know that I’m outspoken, Australian and I say how it is. It was cool to joke around with those kinds of fans, but the ones that were hating and the keyboard warriors, it was just ‘Meh, block.’ I just had to focus on my fight. I was ready to put TUF behind me and focus on my UFC debut.”

Once her time on reality television was well and truly in the rear-view. the open road was the next stop. There were no more cameras. There was just a car and a simple destination. It was time to prepare for a chance to be in a fistfight on the world’s biggest stage.

“It was really cool to get back to my TUF coaches and just spend some time with them and getting some work in,” she admitted. “Alliance MMA is where I belong. I love training there. They are an amazing team. It was really cool to travel across California and get the best training possible. It was wicked to work with the Diaz brothers and their crew out there. They are amazing athletes, and they were very welcoming. A lot of people probably don’t know what to expect from Stockton and Lodi, but I went there and they were awesome. They took their time out to show me extra technique and work with me. It was a really cool experience.

“I’m thinking of heading back out there. I really just wanna head out to the [United] States and get in a few good months of training just to learn, when I’m not in camp. It’s a bit hard to focus on technique and learning new things when you’re in camp because you’ve just gotta put the work in and get your ass beat for like 12 weeks. I definitely would like to go out there when I’m not training for a fight and just learn and expose myself to new techniques and new things.”

Dec. 12 couldn’t have come quick enough. With a cross-country training tour completed and with countless weeks away from her kids, it was time for it all to become a reality. Rawlings and the famed Octagon would officially meet. After a tense build-up, the fight wouldn’t go her way and Rawlings would be sent to her second straight defeat.

“I start slow,” Rawlings admitted. “I knew going into that fight that I start slow. I learnt that going against Tecia. I definitely think that I need to fight backstage before walking out [laughs]. I need a five-rounder. I need to do a few rounds with some training partners backstage before walking out. I definitely know that’s one of my biggest issues. I kinda feel that I have focused so much on my takedown defense that I’ve neglected my jiu-jitsu, so I’d like to get back to my roots and get back to focusing on my ground game and my submissions. You know, you learn more from your losses, so it’s time to go back to the drawing board. I feel like nobody in my division so far likes to stand with me — they can’t take my pressure [and] they can’t take my power.

“I definitely feel that my biggest hole is my ground game and trying to get people to stop hugging me. They just wanna hug me [laughs], so I’ve gotta work on stopping people from hugging me, because we’re fighting, we’re not hugging.”

As TUF 20 came to a close, a new division was well and truly born in the UFC. The fighters of the strawweight division showed that there are rising stars and many exciting potential match-ups ready for years to come. Almost 20 women are now vying for opportunities to make a return to the Octagon, and that’s one thing that isn’t different about Rawlings.

“I’ve had a chat with my coach and we’ve talked about a few possibilities, but I don’t wanna say anything just yet,” she admitted. “Obviously, I’ll fight whoever I want and whoever they give me. I’ve never said no to a fight. My division is stacked, so I don’t think I’ll go without a fight any time soon.

“I’d like to fight before [the next Australian card]. They said to just let them know when I wanna fight. I’m just enjoying the Christmas break and trying to get my body healthy again and get back into it in the new year. I’d like to fight in June or July, but we’ll just have to wait and see.”

Bec would like to thank Nick Diaz Academy, Gracie Fighter Lodi, Gilbert Melendez and El Nino Training Center, Alliance MMA, Gamebred Combat Club and South Coast Mitsubishi. She would also like to thank her family for all their help. Follow Rawlings on Twitter: @RowdyBec
Advertisement