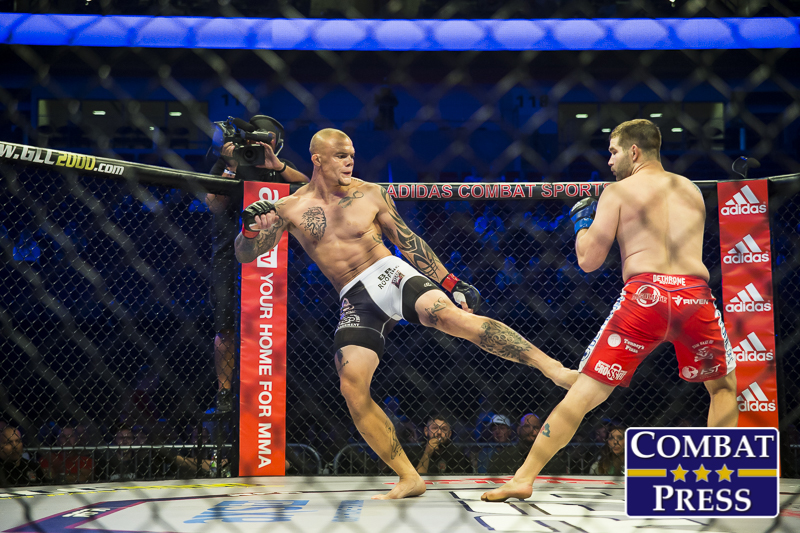 The UFC returns this weekend with UFC Fight Night: Smith vs. Spann with a headlining affair in the light heavyweight division between ranked fighters.

Sixth-ranked Anthony Smith looks to extend his winning streak to three and reinsert himself into title contention as he takes on Ryan Spann. Spann has had one hiccup since joining the UFC, dropping a wild contest to Johnny Walker. Other than that, he has looked incredible, racking up five wins including victories over Antonio Rogerio Nogueira, Sam Alvey and Misha Cirkunov. A win over Smith would vault Spann into the top 10 and open the door to title contention.

The co-main event stays in the light heavyweight division with Moldovan brawler Ion Cutelaba taking on NJCAA National Champion wrestler Devin Clark. This fight was originally scheduled to take place in May, but an injury forced Clark out of that contest, and Cutelaba ended up taking on Dustin Jacoby in a barn burner of a fight that ended in a draw.

Also on the main card is another rescheduled bout, this one in the women’s flyweight division. Ariane Lipski was supposed to fight newcomer Mandy Böhm earlier this month, but an illness caused Böhm to withdraw from the fight. Lipski is looking to snap a two-fight losing skid against the debuting Böhm, who enters the fight with a record of 7-0-1.

The event takes place inside the UFC Apex in Las Vegas with the prelims getting underway at 4 p.m. ET. Main card action follows at 7 p.m. ET on ESPN+. Combat Press writers Andrew Sumian and Matt Petela preview the action this week as they go Toe-to-Toe.

Anthony Smith has won back-to-back fights; does he defeat Ryan Spann and extend his winning streak to three?

Sumian: Besides a thrilling first-round knockout defeat courtesy of Johnny Walker, Spann has been close to perfect in his seven-fight UFC career. The No. 11-ranked Spann is a towering and lengthy 6-foot-5 with athleticism and strength rival that of a seasoned heavyweight. In addition, the Memphis native boasts a well-rounded game. His improving ground game is backed by a thunderous pair of hands which has culminated into five knockouts and 11 submissions. A victory over Smith will surely launch Spann into a top-10 ranking.

Smith is undoubtedly one of the most likable fighters on the UFC roster today. The former title challenger’s humility, heart and determination is hard to come by these days. However, the days of Smith fighting for a title are likely long gone as he transitions into more of a gatekeeper role that tests the readiness of up-and-coming light heavyweights. The No. 6-ranked Smith looked fairly poor in his outings against Glover Teixeira and Aleksander Rakic but rebounded nicely against a very game Devin Clark and Jimmy Crute. Fresh off two victories and back to his winning ways, Smith will look to derail the climb of another contender in Spann.

To put it bluntly, Smith will not defeat Spann. Spann is inarguably a better fighter than both Devin Clark and Jimmy Crute at this point in their careers. He will finish Smith via TKO. Spann is under the radar in regards to his potential as a future contender in the division and will put his name in the spotlight come Saturday night.

Petela: There is no doubt that Spann is more talented than Clark and Crute at this point in their careers. However, Smith has looked rejuvenated and almost as if he has gotten some swagger back after picking up two straight wins. He also has only lost to the best of the best at light heavyweight. Spann hasn’t proven that he is on the same level as fighters like Teixeira, Rakic or Jon Jones. He has the opportunity to show that he is on that elite level this weekend but he will come up short against Smith.

This will be a huge statement win for Smith. He will prove to all his doubters that he has another run towards a title left in him. The fight itself may not be full of fireworks but Smith will look impressive as he nullifies the power of Spann and slows the fight down over five rounds. He’ll outpoint Spann on the feet and capitalize on his grappling ability.

Ion Cutelaba is winless in his last three contests; will he be able to right the ship and pick up a victory over Devin Clark?

Petela: Clark has struggled when he has been put up against elite competition. He has lost to both main event fighters and current champion Jan Blachowicz. Other than that, he has been nearly perfect. While Cutelaba is an ultra-talented fighter, he is a step below elite right now and will not be able to snap his winless streak this weekend.

This loss will have to be a turning point for Cutelaba. The Moldovan fighter is wildly aggressive and that leads to him winding up on both sides of the highlight reel. He is still relatively young at 27 years old and has the physical talent to compete at an elite level. Cutelaba will need to mentally mature as he hits his physical prime in order to reach his full potential.

Sumian: Despite Cutelaba’s unnecessary aggression and somewhat silly behavior throughout his UFC career, the Moldovan is capable of dropping anyone who stands in front of him. That being said, this will be a unanimous decision victory for Clark as he turns in a boring-yet-effective performance. Cutelaba will chase the more composed Clark hoping to catch him with a huge shot. Clark will be able to avoid the power of Cutelaba and snooze his way to a clear victory.

Nikolas Motta, Cameron VanCamp and Mandy Böhm do we need to know these names?

Sumian: Böhm is definitely the one to closely pay attention out of the three. She makes her UFC debut against Ariane Lipski after compiling a perfect 7-0 record outside the UFC. Böhm will make quick work of Lipski and earn herself a first-round finish officially launching herself in the women’s flyweight division which is in need of some new talent.

VanCamp and Motta make their UFC debuts against one another and both bring some notable experience to the table. They join the already crowded lightweight division and an impressive victory will certainly provide an opportunity to face a proven UFC lightweight in the near future.

Petela: Reluctantly, I have to agree with my colleague here. Of these three fighters making their debut, Böhm has the most potential and the highest upside. VanCamp stepped in to face Motta on short notice, replacing the veteran Jim Miller. Much respect to him for taking the fight, but it is tough to look good on the big stage without a proper training camp. For VanCamp, taking this fight is a means of earning goodwill with the UFC and therefore getting a second chance to fight with the promotion. Motta should win their contest but don’t expect either man to be knocking on the door of the rankings any time soon.

Petela: Raquel Pennington. She comes into this fight off a win in her last outing against the now-retired Marion Reneau but is 2-3 in her last five contests. While on the surface her recent record may not seem to put her on the hot seat, based on the eye test, she isn’t the same fighter she was a few years ago. A lackluster performance this weekend may have her on the outside looking in at the UFC if she continues her MMA career.

Sumian: Emily Whitmire and Ariane Lipski are both on the hot seat. Neither has been very impressive thus far in their UFC careers, riding back-to-back losses by finish. If a third consecutive loss by finish comes for either fighter, it could easily lead to a release sooner rather than later.

Sumian: The bantamweight showdown between Montel Jackson and JP Buys. Both of these young guns are exciting combatants who are sure to put on a fast-paced and high-action bout that will definitely capture the attention of fans tuning in.

Petela: Arman Tsarukyan and Christos Giagos. Tsarukyan should have a ton of eyes on him as he has looked incredibly impressive since joining the UFC. He gave Islam Makhachev a difficult fight in his UFC debut. Giagos is largely flying under the radar at lightweight, but he is a well-rounded fighter who has won back-to-back contests. This one will be a high-level battle until Tsarukyan ultimately picks up the finish.

Petela: Tsarukyan is one of the brightest prospects in the entire UFC and the only thing missing from him moving from prospect to contender is a dramatic finish. He gets that this weekend with a gnarly submission win over Giagos.

Sumian: Spann. The prospective contender will be able to finish Smith and officially announce himself as a prospective title challenger. A showdown with a top-five opponent will be next.

Sumian: Some Memphis-style BBQ. The weather is still warm and what better way to pay tribute to Spann’s biggest UFC victory than some iconic Memphis BBQ. Saturday will be the coming out party for this up-and-coming light heavyweight contender so fire up that grill and enjoy!

Petela: Truly hard seltzer. In the new craze of hard seltzers, the marquee name is White Claw and it seems like every major domestic beer distributor has come out with its own version. Truly has largely gone under the radar just like this fight card. So crack open a few Truly hard seltzers and enjoy a fun night of fights.