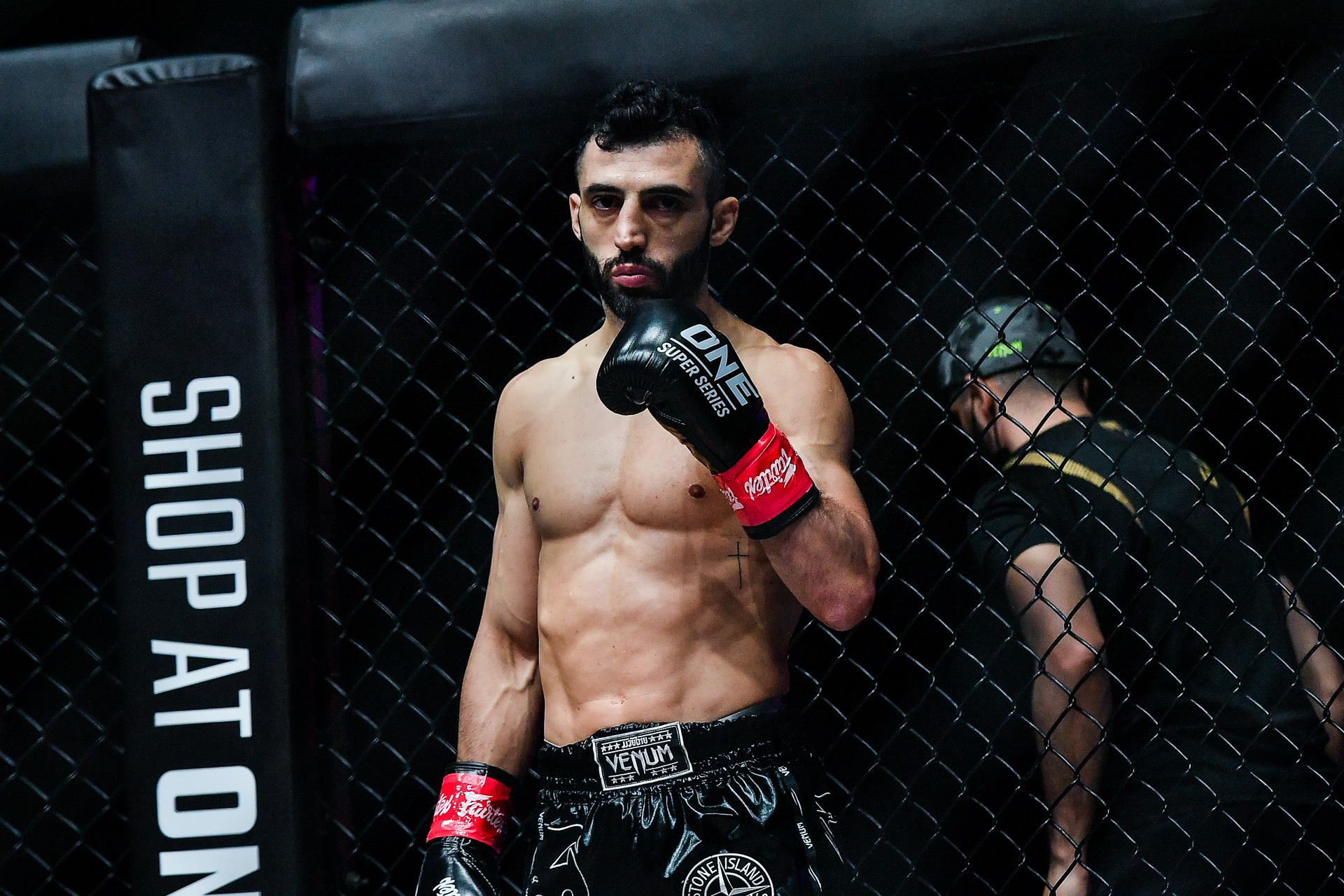 ONE Championship’s Giorgio Petrosyan: ‘Nothing has Changed’

Giorgio Petrosyan, one of the greatest kickboxers ever, defeated former GLORY champion Davit Kiria at ONE Championship: Fists of Fury on Feb. 26. Petrosyan now holds an unbeaten streak of 20 fights and an overall record of 104-2-2 with two no-contests. He has 41 knockouts in his storied career.

“The Doctor” is now enjoying a short rest period in Milan, Italy, where he lives, trains and runs the “Team Petrosyan” Gym with his brother, well-known kickboxer Armen Petrosyan.

Giorgio chatted with Combat Press about his comeback, his future, training, and his personal life. The conversation has been lightly edited for clarity and improved flow.

How did it feel stepping in the ring after such a long layoff of almost 13 months? Was this the first time you experienced such a long period of inactivity?

It felt incredible! It was almost one year since my last fight, and even if during this time I’ve been training really hard, it was a special feeling. I honestly have to admit that when I stepped in the ring it felt like nothing had changed.

Inactivity did not affect me that much. I wanted so bad to fight, and it felt amazing. It has been hard, but I’ve never given up during these months. Now I see the results of such hard work. During my career, I sustained many injuries, so it wasn’t the first time. I was mentally ready.

During your last match, you looked fantastic. What is your secret? How did you manage to always keep the maximum concentration level during your training, even when you knew there were not matches coming up?

There are no secrets, just keep grinding and doing hard work as always.

During lockdown, I was lucky to live just beside my own gym. I never lost the grip from the fight-mode mentality, thanks to my brother Armen and my trainer Ermes Di Francesca, who pushed me every time beyond my limits.

I love this sport, so I do not train only when I have a match. Kickboxing, to me, is more than my sport and my job. It’s my life, so I enjoy every minute spent in the gym.

This win confirmed you as No. 1 in the division. To use soccer as a comparison, your case looks like that of Cristiano Ronaldo. Years go by, but you are always on top. Who are your sports role models outside of combat sports?

Winning always has a good taste, but my real goal for 2021 is fighting for ONE Championship’s title.

Sure, I admire Ronaldo, even if soccer is a bit different. What we have in common, I think, is the pure love we feel for our sport. The more you get older, the more sacrifices you have to make to always be in the best shape. So, if you don’t deeply love what you do, you cannot maintain your level. I usually do not compare myself to others, but I prefer to stay focused on my career and the next steps I have to make.

Combat sports are individual sports, but we all know that team work is fundamental. What about your team? How important is it for your career and your achievements?

Sure, inside the ring you are alone, but before entering the arena for the fight there is a tremendous amount of work you have to put in.

Every morning, I work on my strength and conditioning with Ermes Di Francesca. This is helping me a lot. I work on my technique with my brother Armen, as well as Alessandro Meda. I spar with all the guys who train in our gym in Milan. Sometimes we bring to our camp some professional boxers to help to sharpen up my striking. Recently, I added to the team Doctor Trapani, who is my nutritionist and works in close contact with my supplements sponsor, Yamamoto. Then, for the mental side of my training, I work with Giovanni Tavaglione.

In short, there are a lot of hours of work that must be realized inside the ring. Fans only see the tip of the iceberg, but there is much more behind the scenes which is fundamental.

Alongside my performance partners, all my sponsors are fundamentals. It’s been a few years that I have worked closely with Venum, Stone Island, Yamamoto Nutrition, and Fisiocrem. They have become a family to me.

Nong-O Gaiyanghadao and Superbon Banchamek were mentioned as your next opponents. ONE’s roster is now stacked with talent in your division. Who would you want to face for the title?

Sure, there are many potential opponents. I am not a fighter who picks his opponents. I fight whoever shows up. However, if we look at the rankings, Superbon is number two, so I would love to fight against him for the title. But If ONE decides on another opponent, I am ready.

You have been champion in almost all the best kickboxing promotions over the years. Now, you are in ONE Championship. How do you feel in ONE? What are the main differences from the other promotions?

I fought with K-1 Max, GLORY, It’s Showtime, and all the other top promotions, but I can feel that ONE Championship is something different. If you think about what they are doing during these troubled times, it is simply amazing. Despite the pandemic, they keep pulling off incredible events, and the organization of all the details is simply amazing.

Going more into the technical details, their weight-cutting policies are the biggest difference. You simply cannot cut weight, and that’s really important for athletes’ safety. Before the fight, you can feel that medical examinations are super accurate. From all these little details, as an athlete, I can feel I am in the best promotion in the world.

But the main reason why I love being in ONE Championship is because of [ONE Championship founder and CEO] Chatri Sityodtong. I’ve never been so inspired by anyone in the business as I have by him. When he enters the dressing room before the fight, he just ignites us with his speech. His aura and his charisma are something that is difficult to translate into words.

Every time you fight, your striking and timing are simply amazing — maybe the best ever for a kickboxer. Legends like Nieky Holzken tried to move to boxing. Is that something that interests you as well? If you could, which boxer — even one who is retired — would you want to fight?

Yes, I love boxing inside the ring. It depends on the opponent. For example, against Kiria, I focused a lot on my kicks. But boxing is something that has always interested me.

I would love to have the opportunity to face a legend like Floyd Mayweather Jr. If I had the chance, I would immediately take that fight. Another opponent that I would love to face in boxing is Conor McGregor. I just need a few months to adjust to boxing and I would be ready. I think fans would go crazy.

You’re now 35, and age is becoming a factor. Do you ever think about retirement? How many years or fights do you feel to have left? What are the objectives for this last stretch?

Sure, I am 35 now, and I know I am not a teenager anymore. When I started, I remember being always the youngest kid in the room. Now, the situation is the opposite. But physically and mentally, I am still 100 percent focused on my career. There is no room for retirement. I like to take it step by step, so my next goal is the ONE Championship title. Then we will see.

What are the three toughest moments in your career, and how did you get through them?

Honestly, there’s only one, but it was really tough.

It was when I lost at Madison Square Garden against Andy Ristie. I also broke my hand during the match and then suffered many injuries during that period. For one year, I was inactive. Only thanks to my family and friends did I get back. They helped me reconnect with the fire that burns within me, which is the desire to win. Since then, everything has been much easier.

Sure, I take my fights very seriously. That’s why everyone thinks that I am a serious guy. When I prepare for a fight and when I enter the ring, I leave no room for jokes and laughter, but outside the ring I am a really outgoing person. Anyone who knows me knows that I love laughing.

My favorite activities are playing with my lovely nephews, going to the movies, and having dinner with my friends and family.

Over your career, you have always looked to be in monster shape. How much attention do you put into your nutrition? What foods must you have in your fridge during training camp, and what are your favorite cheat meals?

I have never had weight issues. The more I get older, though, the harder it gets.

During training camp, chicken breast is fundamental. It’s hard, because for two months you cannot step out of the line for one second. But after the match, for one week, I love to have some cheat meals: sushi, pizza and ice cream are just some of my favorites. I know it would not seem so, but I am a real foodie. When I am off camp, I love enjoying food.