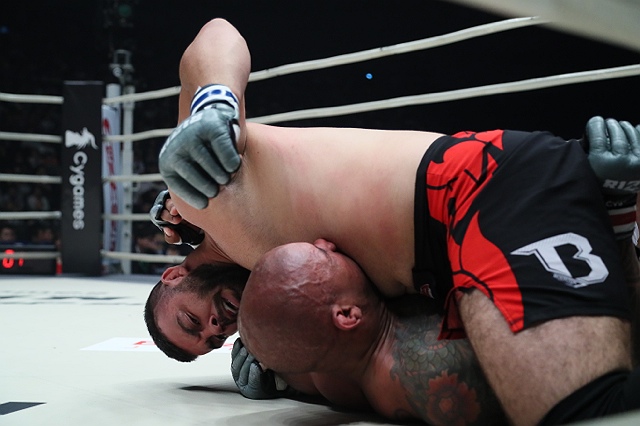 ONE Championship: Fists of Fury II Preview and Predictions

Heavyweights are rarely the first thing to come to mind in association with the ONE Championship organization. The company’s roster is far deeper in the lighter weight classes of the MMA world. However, there is a heavyweight champion — Brandon Vera, if you’ve forgotten — and he’s in need of challengers. ONE Championship: Fists of Fury II will try to solve that problem.

The headliner features two recent additions to the ONE stable. Iran’s Amir Aliakbari almost landed in the UFC, but a combination of factors led him to ONE instead. The Greco-Roman wrestler is a formidable presence in the division, but he’s set for what could be his biggest test yet when he collides with South Korea’s Kang Ji Won. Kang has already dispatched four opponents with his powerful fists, and he’ll try to make it five at Aliakbari’s expense.

The co-main event also shines a spotlight on the big men. Undefeated Russian Anatoly Malykhin has busted through the likes of Baga Agaev, Jake Heun and Alexei Kudin en route to a ONE contract. His promotional debut comes against Alexandre Machado, who has been inactive for more than two years. The Brazilian appeared on the third season of The Ultimate Fighter: Brazil, but found little success. Machado is a former ONE title challenger, which would make him quite the scalp for Malykin to take.

An additional three MMA contests and one Muay Thai affair round out the six-fight effort from ONE. Ruslan Emilbek Uulu, who makes his promotional debut, and Adam Noi, an up-and-comer in the Muay Thai circuit, are among the notable names in the lineup.

ONE Championship: Fists of Fury II airs tape-delayed on Friday, March 5, at 7:30 a.m. ET. American fans can view the entire show for free on B/R Live. International fans can tune in on the ONE app and the league’s YouTube channel.

Heavyweight headliner Amir Aliakbari is now 10-1 with his only loss coming in late 2016 to the legendary Mirko “Cro Cop” Filipović. Will the Iranian wrestler add to his win total on Friday against undefeated South Korean upstart Kang Ji Won?

The organization sure thinks highly of the Rizin veteran, who makes his promotional debut in a main-event slot. The Greco-Roman wrestling world champ has had his fair share of controversy, though. He received a lifetime ban from the International Wrestling Federation after a pair of doping violations, and he also withdrew from a potential UFC contract due to that ban. So, there will always be questions surrounding the legitimacy of what he accomplishes in the cage.

ONE is banking on Aliakbari’s abilities, however. The wrestler is more than a lay-and-pray fighter. He can ragdoll opponents — he suplexed a 274-pound Heath Herring — and he has an active top game that leads to TKO finishes. He has seven first-round stoppages across the regional circuit and Rizin. In Japan, the 36-year-old secured victories over the aforementioned Herring, as well as Valentin Moldavsky and Gerônimo dos Santos. Elsewhere, he topped Denis Smoldarev and Daniel Omielańczuk.

The Iranian powerhouse has another stiff test in front of him. Kang has stopped four foes at the pro level, including Mehdi Barghi in his ONE debut just a month ago. The 25-year-old South Korean up-and-comer does have a lot to prove, though. Barghi was just 4-2, and the Iranian national wrestling champion was getting the better of Kang before gassing. Meanwhile, Kang’s regional competition had combined for a 14-20 mark before clashing with the “Mighty Warrior.”

Aliakbari can take a lot of lessons from how his fellow countryman Barghi performed against Kang. Barghi demonstrated that Kang can be both tagged on the feet and planted on the mat. Barghi secured several takedowns and even transitioned to the mount on a couple of occasions. However, he also punched himself out in an effort to put away Kang, and he failed to stop Kang from bridging out and reversing to gain top position of his own.

Aliakbari is a caliber above Barghi in terms of his ability to control opponents on the ground. He’s also displayed far better cardio than his fellow Iranian. While Aliakbari has improved on his feet, he’ll want to avoid a toe-to-toe brawl with Kang. He has to use his wrestling skills to put Kang on the ground. From there, his control and ground-and-pound should lead him to succeed where Barghi failed.

Is the lone Muay Thai contest on this card worthy of attention?

The 21-year-old Noi scored a huge win over Victor Pinto in early 2020. He has potential, but his best opportunities to show it have fizzled with a previous cancelation of his fight with Han and a scrapped outing against Saemapetch Fairtex. Noi has already tasted gold on smaller stages, and a run to the top of the ONE mountain isn’t out of the question. It all depends on how he does against Han.

Han, 25, posted a 3-1 mark with the promotion before clashing with Nong-O Gaiyanghadao for the championship. He lost a five-round decision in that affair and has gone just 2-2 in his subsequent fights. However, his two wins in this span came via stoppage over the respectable due of Andrew Miller and Mohammed Bin Mahmoud. The Chinese fighter has the ability to play high-level gatekeeper here.

While Anatoly Malykhin provides another undefeated heavyweight in the lineup, the lighter divisions tend to be more competitive ventures for ONE. That’s why the sleeper has to be the lightweight scrap between undefeated Kyrgyzstan native Ruslan Emilbek Uulu and Japanese veteran Yoshiki Nakahara.

This fight will give fans and the ONE brass a chance to truly gauge Uulu’s potential. He’s been fighting since 2015 and has racked up 12 wins, but most of those triumphs have come in extremely small regional organizations. He has had a good recent run, though, that includes four opponents with solid winning records. Uulu has managed five knockouts and four submissions, so he’s a threat regardless of where the fight goes.

Nakahara has seen a lot more action in well-known leagues, including Grachan, Pancrase, Gladiator and, of course, ONE. In the latter of those companies, he has managed a 1-1 mark that includes a victory over Emilio Urrutia and a loss to Garry Tonon.

Both men are coming off extended layoffs, but this should make them eager to reassert themselves as forces in the division. Nakahara has tangled with plenty of established names since his 2012 debut, and he has only been stopped once in his career. Uulu, who makes his ONE debut on Friday, can make a real statement if he can finish his 28-year-old counterpart within the distance.