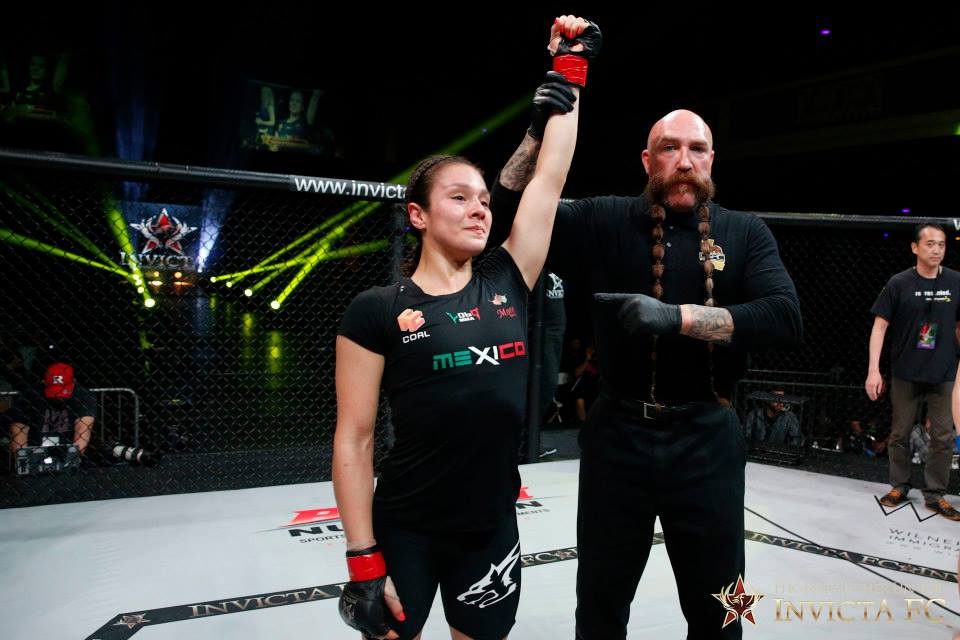 UFC 258 provided some very good fights. Among them were a pair of outstanding performances from Polyana Viana and Alexa Grasso.

Both of these fighters secured wins, but in very different fashion. One did it quickly, while the other rode out a decision. However, both ladies were equally impressive.

There was a third scheduled bout between Miranda Maverick and Gillian Robertson, but unfortunately Robertson fell ill on fight day, which forced the cancellation of the bout.

Viana defeated Martin via a first-round armbar, and there is really not a lot to say about such a quick finish. In the preview, I mentioned how Martin would want no part of the ground game with Viana unless she could end up on top. The fight went to the ground almost immediately, and Martin was in trouble from the get-go. Viana beautifully transitioned from submission to submission before getting the tap. Let’s look at what Viana did right and what Martin could have maybe done differently.

Viana wasn’t thinking just about the current submission. She was thinking a step ahead. She was already prepared for the next attempt if Martin escaped the current one. Someone with Viana’s grappling skills knows what their opponent is most likely going to do to try to escape. Viana was aware of what Martin’s movements were going to be and was ready. This gave Martin no time to breathe or become offensive. It’s also really frustrating.

Think about leaving the house when it’s really cold outside. You brave the snow and the cold and get to your car. You’re feeling happy and ready to get warm. Then, you realize you forgot your keys. Now you are pissed off and annoyed. You have to make that walk all over again. Thie MMA equivalent was Martin getting out of something and having a split second to think she’s OK, only to then land right in another hold.

What could Martin have done differently? Listen, this wasn’t about her doing anything wrong. This was about what Viana did right. If there is one thing Martin could have done, it would have been to not focus so much on the escape right away. She could have instead found a way to pull Viana in close and limit the Brazilian’s movements. Basically, she could have tried to stall, collect her thoughts, and hope for a stand-up. That is super nitpicky, though.

What is next for Viana? Maybe the winner of the upcoming clash between Jinh Yu Frey and Gloria de Paula. This would be a match of two fighters on about the same time frame who are coming off wins.

Two things were clear in round one, and they were to be expected. Grasso wanted to box, while Barber wanted to clinch and get it to the ground. Grasso had success in her mission. She landed some very hard shots that hurt Barber. Granted, Barber did land a couple as well.

Barber then was able to succeed in half her mission. She got the clinch up against the cage. However, part two — the takedowns — weren’t there. This caused a problem, because Grasso was actually controlling the clinch.

It’s easy to see the muscle Grasso has added. She is a lot more physically strong. My suspicion is that Barber did not take that into consideration and thought she might be able to bully Grasso in the clinch and eventually take her down. Grasso did not try to do too much, either. She used good technique to be safe in the clinch, land strikes when she could, and mostly just keep herself standing.

The second round was really more of the same. Grasso showed herself to be the better striker, while Barber again looked to get the clinch. I would have liked to see Barber maybe change her tactics a bit. She seemed to have her heart set on the takedown coming from the clinch. I would have liked to see her go for an alternative. Grasso was throwing some kicks, so maybe Barber could have tried to catch one and use it as her takedown entry or shoot in hard on a double leg.

What we saw instead was a very talented fighter who was confident in herself being able to get the takedown the way she wanted, but who did not have a plan B. In her mind, Barber was going to get the clinch and the takedown from there. She wasn’t prepared for an alternative.

Grasso landed some really hard punches as well, so perhaps Barber just felt safer going for the takedowns this way. Just as in round one, Grasso did outstanding at controlling the clinch, using great technique, and keeping herself safe in what was not expected to be a safe area.

In the third frame, Barber initially seemed to want to keep trying the same strategy. This time, though, she knew she was going to need a finish. She finally opened up her striking arsenal and, to be honest, she was winning the stand-up. In fact, it won her the round. Grasso started to tire and was rocked a bit, so she was now the one hanging on to the clinch in order to survive.

Barber takes a lot of heat on social media. The young lady is a very confident fighter who expects big things for herself. Some people are not fans of that confidence and boastfulness. However, no one can deny the talent is there. Barber is going to have big fights, and she is going to win. What we saw on Saturday night in the first two rounds was someone who had a one-track mind. This doesn’t make her a bad fighter. If it made someone a bad fighter, then we would all be bad fighters, because we all have had that fight. The key is to learn from it, which she will.

In that third round, Barber showed how good she can be. Down on the cards and in need of a finish, she finally adjusted her approach. It was a basic and simple plan: throw as often and as hard as she could. Yet, it worked. If there had been two more minutes in the round, she might well have stopped Grasso. It takes skill, heart and determination to do that.

Grasso showed she is among the elite at 125 pounds. She has her area where she excels, but she is not going to panic if she’s forced to fight her opponent’s fight. She can even excel there, too.

What’s next for Grasso? Well, my job was done for me after the fight. Katlyn Chookagian tweeted a congrats to Grasso and then said she’d love to fight her. I am a huge fan of Grasso, but I train with Chookagian. So part of me doesn’t want to see them fight. However, the fan in me, the part of me that loves good and exciting fights, loves the idea. It makes all the sense in the world.

That is all for this week. Hope you enjoyed the fights as much as I did!