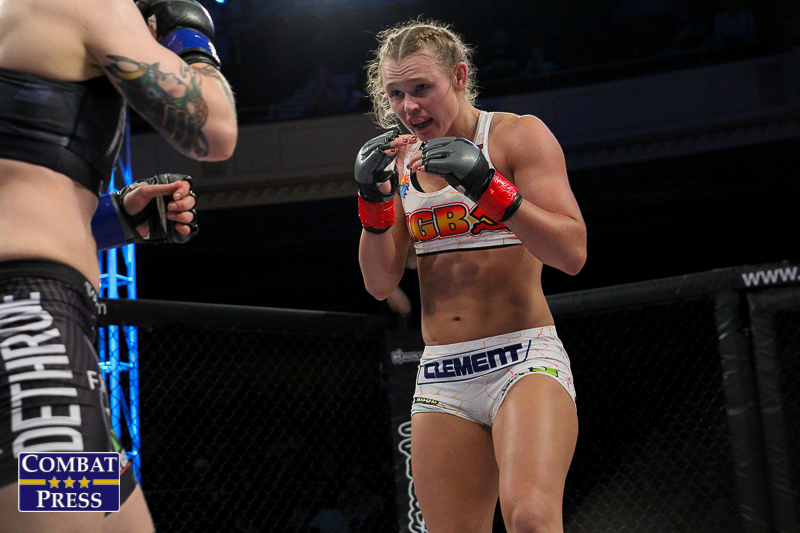 UFC 247 is just days away, as fans anxiously await the highly anticipated card featuring two title fights. Jon Jones and Valentina Shevchenko return to the Octagon on Feb. 8 in Houston to take on, respectively, surging contenders Dominick Reyes and Kaitlyn Chookagian in what will surely be an exciting night of fights. The remainder of the card features many up-and-coming fighters looking to leave an impression on fight fans throughout the world. One of the more interesting fights on this card is a women’s flyweight showdown between Lauren Murphy and Andrea Lee.

Murphy, who resides at No. 7 in the UFC’s official women’s flyweight rankings, made her UFC debut in 2014. While fighting as a bantamweight, she dropped back-to-back decisions to Sara McMann and Liz Carmouche. Since then, the MMA Lab fighter has compiled a 3-2 record and found recent success once dropping down to flyweight. Since her debut at 125 pounds, the 36-year-old has amassed a 2-1 record. She defeated Barb Honchak, dropped a unanimous decision to Sijara Eubanks, and most recently defeated Mara Romero Borella while using her thunderous knees and elbows to earn the TKO. Murphy entered 2020 with an 11-4 record, with eight of her wins coming by way of knockout.

One of Murphy’s most exciting and dangerous weapons in her stand-up arsenal are her vicious elbows. Her elbows alone have led to three finishes through her MMA career, and let’s not forget that gut-wrenching knee she landed on Borella for an impressive upset victory in 2019.

Lee, who sits one spot behind Murphy at No. 8 in the rankings, has inarguably been one of the best additions to the women’s flyweight division and has consistently proven so after making her UFC debut.

Lee won the inaugural Legacy Fighting Alliance women’s flyweight championship in 2017 and successfully defended the belt against Jamie Thorton before getting the call to the big stage after compiling an 8-2 record. She built off that momentum upon entering the Octagon by defeating Veronica Macedo, Ashlee Evans-Smith and Montana De La Rosa before losing a very close split decision to Joanne Calderwood at UFC 242. “KGB” hung with the veteran Calderwood the entire 15 minutes and displayed her diverse striking game while also landing three of her five takedown attempts. The 30-year-old looks to bounce back against another formidable opponent with tons of experience in Murphy.

While the UFC 247 card features two elite champions and fan-favorites like Derrick Lewis, Murphy and Lee will whet the fans’ appetites by giving viewers an incredible women’s flyweight match-up and an early “Fight of the Night” candidate. These two ladies will put on an impressive performance that will surely leave fans wanting to see them compete again in the near future.