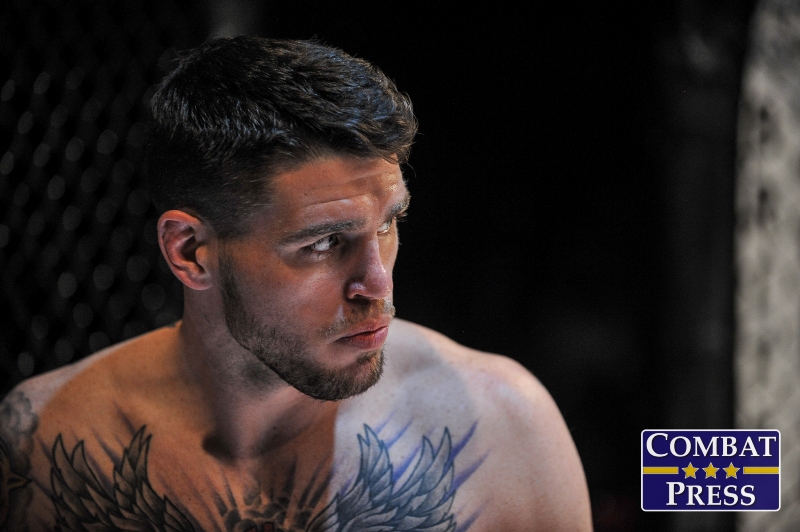 Going back to the most ancient, traditional martial arts, the highest-level practitioners have understood and utilized the concept of fluidity. Fighting as a sport can get very rigid, a quality that is very apparent in terms like “stand-and-bang” or ”ground-and-pound.” These ideas sound a lot like two Mack trucks colliding head-on. Fluidity goes right out the door.

The world of MMA has been pulled in a lot of different directions. What started as a contest of individual fighting modalities turned into a mish-mash of disjointed concepts. Pankration aside, modern MMA is still in its infant years, and more and more fighters are starting to realize that while training across wrestling, striking and submission grappling are all important, getting them to flow together is even more important.

UFC veteran Chris Camozzi has had a long and storied career. From a cracked jaw on season 11 of The Ultimate Fighter to two short-notice fights against Brazilian Jiu-Jitsu icon Ronaldo “Jacare” Souza to a 26-second knockout of veteran Joe “Diesel” Riggs, Camozzi has been around a long time, and he has seen it all. However, with all of his experience in 36 professional fights, he seemed to continuously fall into the same rut.

“In the past, I would fight jiu-jitsu guys, and be like, ‘Oh man, I can’t go to the ground with him,’” Camozzi told Combat Press. “There have been some instances — like fighting Jacare, one of the best on the planet — where that’s a little different, but fighting guys with a jiu-jitsu base and telling myself I need to keep it standing, I think that mentality is poisonous, almost. Now, I’m telling myself that I don’t care if it’s a wrestler, I’m going to wrestle him. If I’m fighting a striker, I’ll strike with him, and take him down if I want. I’m going to make this fight revolve around what I want to do, knowing that I’m better everywhere and I can make it all flow together.

Camozzi’s mental and physical growth has started to come together due to a strange mix of circumstances. Since his time on TUF, he has had little to no injuries. After making a 3-1 run after accepting his second short-notice fight with Jacare, he stepped into the cage with Thales Leites in August. In the latter half of third round, Leites submitted Camozzi, handing him his first loss in nearly a year and a half. Three months later, he headed to Australia to fight judo expert Daniel Kelly on Kelly’s home turf and suffered his second loss in a row.

“I had a grade-two tear on my MCL, and it was about five weeks out from the fight,” Camozzi explained. “I just want to give the doctors credit who helped me rehab it. The doctors from Resilience Code helped out a ton here in Denver. We were able to rehab it, and it was fine during the fight. It didn’t affect me there.

“I didn’t get to train as much as I wanted, but we made due. I wasn’t able to do much skill work. It was more cardio on an elliptical or stair stepper. I was able to hit mitts, against a wall, but they didn’t want me twisting or turning. A loss is a loss. I chose to show up, but I always choose to show up, so that’s the thing, because, when you sign a contract, you have to show up.”

Not one to make excuses, Camozzi takes full responsibility for dropping the fight against Kelly. He fought back-to-back fights every three months throughout the course of 2016, and he never really felt like he was improving at anything. With only one more fight left on his current contract, it was time to take a step back and get better, both mentally and physically.

“After the fight, I took some time to let [my knee] heal, so it wouldn’t get hurt again,” Camozzi said. “I did a couple more weeks of training light when I first got back, and now it’s good to go. I wanted to take that time to get better anyway. I’ve just been jumping fight to fight, and a lot of times, it’s harder to get better in training camp. It’s what you do outside of training camp that makes you get better.”

In the gym, Camozzi is a fantastic kickboxer and his wrestling was good, but he always felt like he needed improvement, not only in his general grappling, but in his overall approach to fighting. The first thing he did was hire a couple of additional world-class coaches to supplement his training with Marc Montoya at Factory X Muay Thai.

“Obviously, we continue my striking with Marc, always changing things, doing new stuff, but I’m not losing fights from striking,” Camozzi said. “I decided to hire a new jiu-jitsu coach. I hired Mario ‘Busy’ Correia and then I hired Darryl Christian as a wrestling coach. He was on the Greco-Roman world team, and he’s done a lot for MMA. You don’t hear a lot about him yet, but he’s working with a lot of big names in the sport and he’s changing MMA wrestling.

“That’s been huge for me. Working with Busy, I’ve learned a lot of small detail things. He didn’t change my whole game, but he showed me a lot of little tweaks — small adjustments that make a huge difference. I’ve been drilling and training with him up to four days per week, and I used to do jiu-jitsu one day per week. The same with wrestling. I have never drilled this much during a training camp. It’s made my game so much tighter. In an hour, I’ll drill two, maybe three, moves, and I’ll just drill it over and over again until I’m using it in sparring and using it consistently.”

Camozzi’s next fight takes place on Sunday at UFC Fight Night 109 in Stockholm, Sweden. For the last fight on his current contract, he will face Trevor Smith, a wrestler who was a Washington state champ, as well as an NJCAA All-American. Ready to bring some fluidity to his overall game, Camozzi could not have picked a better time to seek out Busy, a BJJ black belt under Carlos Gracie, Jr., and Christian, who is a two-time national champ in Greco-Roman wrestling. While Busy is local and helps Camozzi train at both Factory X and his own gym, Christian is remote.

“Modern technology helps a lot,” Camozzi said. “He lives in California and comes to town maybe once every other month, and I get to work with him. We do a lot of video training. He’ll send me videos of certain positions he wants me to work, and I’ll just drill them. I’ll get together with my brother and other guys from the gym, and I’ll just drill it over and over again and make them do it with me. It’s actually really good.

“Sometimes, taking classes can be overwhelming and you learn too much stuff. I just need a couple moves, and I need to perfect them. He’s able to watch some of my training, and I’ll send him sparring footage and we’ll correct from there. It’s more specific for me. Everything he sends me is for me, and it’s not for a class. It’s specific for me, and I think this is actually working better than having a regular coach at the gym that I’m constantly working with.”

Camozzi has probably had the most comprehensive training camp of his career. While nobody wants to tear a knee, the injury was really just a blessing in disguise. Fighting four times in a year is great in some ways, but Camozzi needed room to breathe. With back-to-back losses, he cannot afford to drop this fight.

“In my head, as long as everything goes well — no injuries and stuff — I think I’ve got another five years,” Camozzi said. “That knee injury was the first real injury I’ve ever had. I dislocated my shoulder a couple years ago, but that was pretty minor and I just had to take some time off. This is the first major injury I’ve had training in 11 years. I’ve been lucky. We train really smart, and we don’t overtrain. We don’t train like assholes at Factory X. If my body holds up and I listen to it, and my coaches and I all trust in the program, I think I can fight another five years easily.”

Camozzi is still only 30 years old. He runs a successful business at Performance MMA, and, likely, still has his best fighting years ahead of him. He has approached most of his recent opponents with some sort of game plan, which has actually hindered some of his performances. He no longer feels he should focus on the other guy. He needs to focus on himself. It’s all about bringing some flow to his game.

Camozzi would like to thank all of his coaches and training partners at Factory X and Landow Performance, his doctors at Resilience Code, LivWell Enlightened Health, his personal camera crew Alex and Hagin, Revivid Sports, his wife, family, friends and fans. Follow Chris on Twitter: @ChrisCamozzi
Advertisement