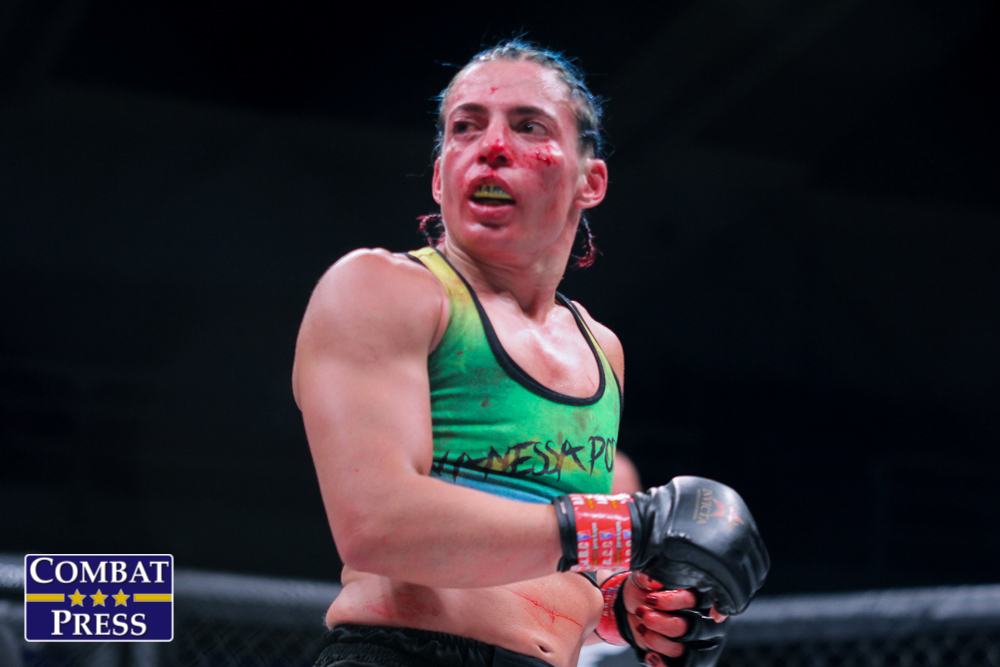 With the growing popularity of women’s MMA, it is important to recognize these women with a rankings system of their own. Between the UFC’s inclusion of a bantamweight division, its addition of the strawweight and flyweight divisions, Bellator’s increasing attention to the women’s side of the sport, and the all-female promotion of Invicta FC, more and more women are being exposed to casual and hardcore fans alike. Every month, Combat Press compiles the staff’s individual rankings from featherweight to atomweight to create the Combat Press Women’s MMA Rankings.

Dropped from the rankings: Olga Rubin (9)

Olga Rubin is out of the top 10 after a loss in November. The former Bellator title challenger fell via TKO to Sinead Kavanagh at Bellator 234. Arlene Blencowe moves up a spot to seventh in the rankings with a huge win over former UFC fighter Leslie Smith at Bellator 233 in what some would consider an upset.

No fighters in the top 10 were in action during the past month, so the rankings remain unchanged. This trend of inactivity is set to change in December. Amanda Nunes looks to cement herself as the best female fighter in the world when she takes on Germaine de Randamie at UFC 245. On the same card, Ketlen Vieira meets Irene Aldana. Aspen Ladd and Yana Kunitskaya kick off the month’s relevant action when they go to war at UFC on ESPN 7 on Saturday, Dec. 7.

No. 5-ranked Katlyn Chookagian secured a 2020 title fight with a victory over former Invicta champion Jennifer Maia, who retains her No. 6 spot despite the loss. At Invicta FC 38, Invicta flyweight queen Vanessa Porto defeated Karina Rodriguez in a non-title fight after Rodriguez missed weight. In December, Bellator champ Ilima-Lei Macfarlane fights The Ultimate Fighter veteran Kate Jackson in the main event of Bellator’s trip to Hawaii. No. 4 flyweight Jessica Eye will take on Viviane Araujo at UFC 245.

No fighters in the top 10 were in action during the past month, so the rankings remain unchanged. December, on the other hand, holds a key match-up in the weight class. Undefeated up-and-comer Marina Rodriguez looks to continue her move up the ladder when she takes on Cynthia Calvillo at UFC on ESPN 7.

No fighters in the top 10 were in action during the past month, so the rankings remain unchanged. In December, the top two 105-pounders, Ayaka Hamasaki and Seo Hee Ham, will square off in a rematch under the Rizin banner.