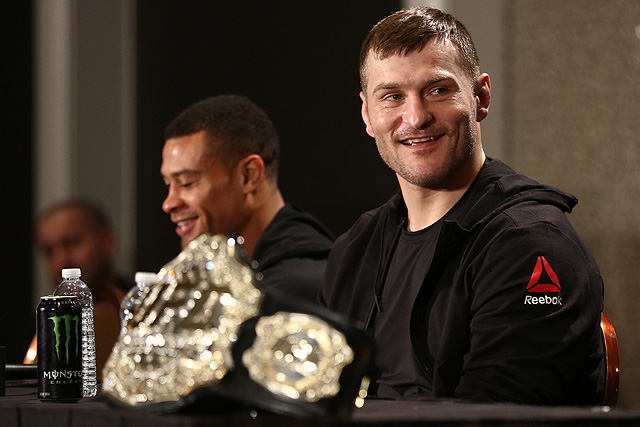 Next Steps for the UFC Heavyweight Division

The dust has finally settled in the UFC’s heavyweight division.

With Stipe Miocic regaining his heavyweight title from Daniel “DC” Cormier roughly a month ago, the division is ready to move forward. This is not to say that DC was holding up the division. It was more so Miocic — albeit if anyone deserved a rematch, it was the most dominant heavyweight champion in UFC history. However, the pause button is no longer pressed.

Now that the target is back on Miocic’s back, here’s what the UFC should and should not do with the champion and the rest of the division:

1. The UFC SHOULD NOT book the trilogy fight between Miocic and Cormier.

Before the lynch mobs come out and yells about how each fighter has a win over the other, please hear me out. It’s time for the division to move on. Even with the loss to Miocic, DC will go down as one of the greatest ever. His real dominance began back in his Strikeforce days, and he carried it over into runs as the UFC light heavyweight and heavyweight champion. The rubber match between Cormier and Miocic only creates a situation where other challengers in the division are left in limbo.

2. The UFC SHOULD book the rematch between Miocic and Francis Ngannou.

Since his loss to Miocic and the subsequent defeat in his next bout against Derrick Lewis, Ngannou has looked revitalized and reborn as a fighter. He has secured three first-round finishes and competed for just 2:22. This run includes wins over Curtis Blaydes and former UFC champions Cain Velasquez and Junior dos Santos. It’s a shame that the fans never got to see how a clash between Velasquez and Miocic would have turned out, but it’s clear that Ngannou has worked his way back up and is ready to challenge the Croatian once more.

3. The UFC SHOULD NOT book Miocic against Jon Jones… yet.

This is really tough to argue, because it’s a fight that fans want to see and a bout that would net both fighters a significant payday. However, this decision is not the right move for either fighter or weight class. Miocic needs to extend his time at the top of the heavyweight division, and a fight with Jones jeopardizes that. Let Miocic take out a couple challengers before setting up the Jones fight. Please.

Let’s not ignore the elephant in the room: DC vs. Jones III. It’s hard not to admit that it was the fight that everyone needed and expected to happen had Cormier been victorious against Miocic. It would have been exactly what DC wanted. It would have come in the heavyweight division and provided Cormier with a chance at redemption against his rival. However, this fight is out the window, unless the UFC throws a curveball and decides to book it at light heavyweight. Stranger things have happened…