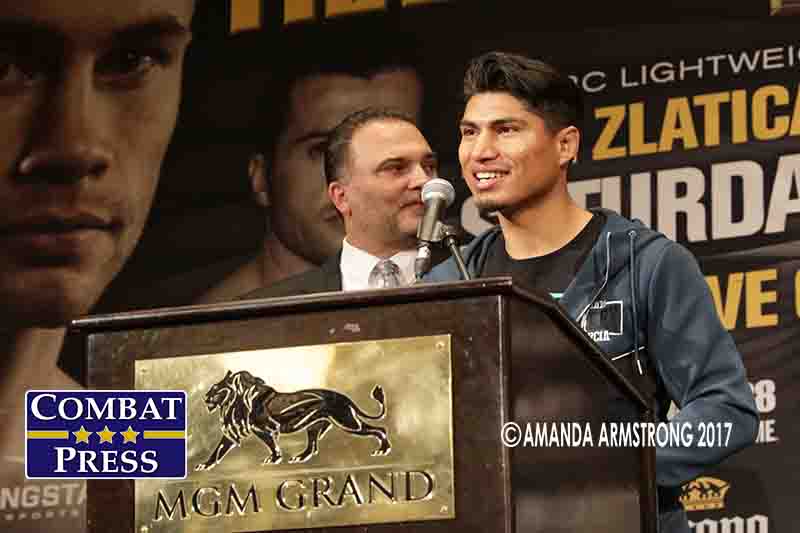 Mikey Garcia: A Man of His Word

With Mikey Garcia’s bout against Errol Spence Jr. just a few days away, the aura that comes with a fight of this scale is starting to take form. On one side, you have Spence, the New York-born, Texas-raised welterweight who has made easy work of fighters on his way to winning and successfully defending the IBF title. On the other side stands Garcia, the California resident who is a vagabond when it comes to weight classes as of late, drifting up and down and fighting champions as he wants. It’s a contest between two men with no blemishes on their fight records. One of these men has intentions so bold that many shrugged it off when he starts talking about the match-up.

“I told everybody, even before the [Sergey] Lipinets fight, that I would eventually move up to 147 [pounds] and fight Spence,” Garcia told Combat Press. “I liked that fight from the day I saw him fight [Lamont] Peterson. I told everyone that’s the man I want to face when I move up to 147. I had to take care of business with Lipinets first, and drop down to 135 to unify with Robert Easter, but my mind had already been set on moving to 147 and fighting Spence if he was available. Now we’re here.”

When Garcia revealed his intentions to fight Spence, the collective shrug came from the masses of boxing fans and media. Another fighter talking up a game? We’ve seen it plenty of times before, and we’ll continue to see it as long as men have air still left to breathe. It might have been only the closest to Garcia that had known this wasn’t Garcia taking his turn at standup comedy. He was serious. He was determined. He was ready to open a pandora’s box of ideas.

“Everyone has different reactions,” said Garcia. “Many said I shouldn’t be doing this, that it wasn’t a fight for me, too much weight. I decided to show and prove everybody wrong. Against what everyone was saying. I tell everybody that I need challenges; I need motivation. A regular, easy fight doesn’t do it for me. That’s boring. I need this kind of fight to motivate me, to challenge, to push me and bring out the best in me.”

Our first foray into the mind of Garcia came last year before the Lipinets fight. He compared not being challenged to playing a video game that becomes too easy. When that happens, anyone is bound to get bored. Garcia is entering this territory. The game has become too easy — he has 39 wins right now — and the difficulty needs to be notched up to expert level to make it fun again.

The journey up to this next level of difficulty began with Garcia having to figure out whether he could remain just as good while adding weight onto his frame. Enter Victor Conte, the famed sports nutritionist who has set up shop in California and started up the SNAC team, which is aimed at helping fighters perform at their best under whatever conditions.

“I really wanted this fight, and I knew if I was ever able to get this fight I was going to have to change my training and change my physique just a little,” said Garcia. “I don’t want to be big and bulky and slow. I talked to my brother Robert and my dad, and we figured the best thing to do is go out there with Victor Conte at SNAC for a few weeks to kind of get the size that we want. And we built up enough size to where I feel comfortable, and I can really hold my own.

Garcia has been able to make these decisions without outside interference, because he is essentially a free agent. His experience with Top Rank ended badly, and that was enough for him to make the decision not to sign with a promoter. So far, everything has been going according to plan. The politics that rears its ugly head in boxing so many times and stop fights from happening? Nonexistent here.

“I understand why fighters need promoters, and managers, and advisors,” Garcia admitted. “I had the similar scenario [at the] beginning of my career, but then I realized that those people that are there to help you sometimes keep fights from happening, because it’s not in the best interest of their business

“Even as a fighter, I get the business side of it, and that’s the reasons these fights don’t happen. It’s not the best business yet. I just got turned off by that, you know. I want to make sure I’m in control. I do what I want, to give my fans the best fight, and [I] have my own agenda, and if I was attached to anybody, then my pool of choices would be definitely diminished. I wouldn’t have access to all the fighters that are different weight classes. It works out better doing what I’m doing, staying independent, working fight by fight.”

The decisions made by Garcia are calculated. He is obsessed with one thing, and that’s leaving behind a legacy in the sport of boxing.

“I want to be remembered as one of the best fighters and especially one of the greatest to ever do it,” said Garcia. “So, in order to accomplish that, I need to take on the biggest challenges, the biggest fights. [I need to] challenge myself, to move up and down in weight, and fight the toughest champions. And that’s what I’m doing. I challenged Lipinets at 140 pounds for his IBF title. He was undefeated. Then I fought Robert Easter for his IBF title at lightweight, and he was undefeated. Now, I’m fighting Errol Spence at welterweight, another undefeated champion. In 12 months, I [will have fought] in three different weight classes and three undefeated champions.

“That’s what makes me different, sets me apart from other fighters and other champions. It’s not about winning a title and babysitting it and taking care of it by fighting contenders that don’t have the pedigree to be fighting yet for a title. I want to fight champions. I want to win titles at different weight classes so people can really appreciate me for the fighter that I am.”

On Saturday, March 16, Garcia takes his next step in cementing his legacy. He’s ready to distance himself from ordinary and move on to legendary. Garcia is changing the settings on this game. It’s time for expert difficulty.